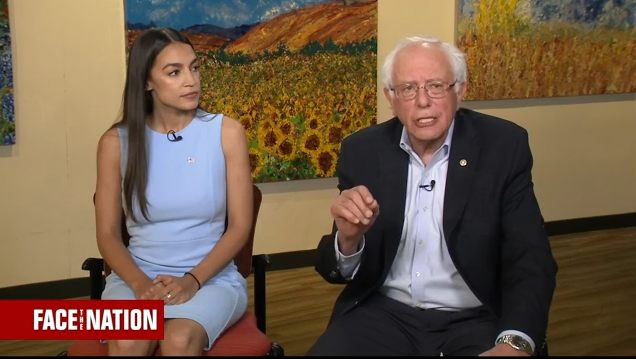 The following is a transcript of the interview with Sen. Bernie Sanders, independent of Vermont, and Alexandria Ocasio-Cortez, Democratic candidate for Congress in New York, that aired Sunday, July 22, 2018, on "Face the Nation."

MARGARET BRENNAN: We're back with another look at what's going on within the Democratic Party. Last week we spoke with New York Congressman Joe Crowley, who lost his primary in a stunning upset to a political novice. This week, we welcome the woman who beat him, 28 year-old Alexandria Ocasio-Cortez who is in Kansas campaigning for Democratic candidates along with a very familiar figure in the Democratic Party, Bernie Sanders. Welcome to "Face the Nation." It's great to see you both side-by-side. Ms. Ocasio-Cortez, you have said it was Senator Sanders who really inspired you to enter the political race in the first place. What is it like for you to be out there campaigning alongside him?

ALEXANDRIA OCASIO-CORTEZ: I mean it's- it's certainly surreal. Just two, two years ago we were both in St. Mary's Park in the South Bronx. I was in the crowd with thousands of other people across ages, races, creeds, incomes and to be here two years later pushing that revolution in Kansas is pretty amazing.

MARGARET BRENNAN: Senator Sanders, Ms. Ocasio-Cortez still has a November race to win. What advice are you giving her?

SENATOR BERNIE SANDERS: To keep doing what she has done. She ran a extraordinary campaign. And the reason that she won is she ran on ideas that were relevant to the working people in her district. She put together a strong grass roots campaign and she worked her tail off. And any candidate in America who is prepared to do that, I think, has an excellent chance of winning.

MARGARET BRENNAN: Let's talk about some of the candidates you're out there right now trying to help win. You're in Kansas, that is a solidly, or at least thought of as a solidly pro-Trump red-state. It voted overwhelmingly for the president in the last election.

SEN. SANDERS: Well Margaret, I happen to believe passionately, that there really is not a blue-state, red-state division in this country. I think there's a lot of mythology attached to that. People believe that healthcare is a right. People believe we should raise the minimum wage to a living wage. People do not think, as Trump does, that we should give a trillion dollars in tax breaks to the top 1 percent. But in fact we have got to demand that the rich start paying their fair share of taxes. So, whether you're in Kansas or the Bronx or in Vermont we have common interests and common aspirations and we have got to fight for an America that works for all of us, not just the 1 percent.

MS. OCASIO-CORTEZ: It absolutely does bring up new voters and in fact, we start- we found this here in New York, back home we expanded the electorate 68 percent over the last off year midterm primary. So for us, this is about inspiring people to the polls, giving them something to vote for, creating hope for this nation, and knowing that so long as there are working class Americans who believe in a prosperous and just future we will have hope no matter how red the district.

MARGARET BRENNAN: Last week on this program we had the man you defeated, the New York Congressman Joe Crowley and he congratulated you on your win. He said you very much deserved it. He also explained two factors he thought that were- were decisive here. One of them being the year of the woman, he called it, and also the timing of the primary. Are those factors in your view?

MS. OCASIO-CORTEZ: Well, I think that the factors that ultimately created our win was the fact that we had bold commitments and I campaigned on hard commitments of Medicare for all, tuition free public college, ensuring a Green New Deal for our future and championing those issues were the reason that we won. We won across demographics. We won- we expanded the electorate ourselves. We did the work of organizing.

MARGARET BRENNAN: So you reject the idea that your gender was a factor here?

MS. OCASIO-CORTEZ: Um, you know, I think that (sighs)--you know I think that in this moment, there's a confluence of factors that makes this moment inspiring. Right now more women than ever are running for office and I do think that women want representation in Congress, absolutely. Congress right now is 80 percent male. And that creates blind spots in our legislation. It means we don't have family leave, we don't have paid maternal and parental leave. It means that we don't get the equal pay that we want. So I think those issues certainly were important.

MARGARET BRENNAN: Well right now there is a female leader within the Democratic Party, Nancy Pelosi. If you are lucky enough to win in November and come here to Washington will you support her?

MS. OCASIO-CORTEZ: You know, I need to get to Congress first. I need to work on winning my general election, but I'm excited to--

MARGARET BRENNAN: You don't see her as the party leader?

MS. OCASIO-CORTEZ: I mean she is the current party leader, absolutely. And I look forward to be parting--to be part of that conversation and, and winning back the House. There is no decision about the party leader until we win the House first.

MARGARET BRENNAN: So you are leaving open the possibility you may endorse her, if you win in November?

MARGARET BRENNAN: Senator Sanders, Vladimir Putin was invited to the White House this fall. Do you think it should be withdrawn?

SEN. SANDERS: Look, the truth is it's hard to comment on anything that Trump says because he could change his mind tomorrow. But I will tell you that I was absolutely outraged by his behavior in Helsinki, where he really sold the American people out. And it makes me think that either Trump doesn't understand what Russia has done, not only to our elections, but to cyber-attacks against all parts of our infrastructure, either he doesn't understand it, or perhaps he is being blackmailed by Russia because they may have compromising information about him or perhaps also, you have a president who really does have strong authoritarian tendencies and maybe he admires the kind of government that Putin is running in Russia. And I think all of that is a disgrace and a disservice to the American people. And we have got to make sure that Russia does not interfere, not only in our elections, but in other aspects of our lives.

MARGARET BRENNAN: Well picking up on that note, because there is some responsibility here in both parties to protect themselves. It was one of your campaign staffers who went to the Clinton campaign and Obama administration to say there was concerns, or suspicions here, of Russians spreading anti-Clinton messages. How do you protect yourself in the next race against something like that happening?

SEN. SANDERS: Well Margaret, Margaret that's a great question and I don't think anyone knows all of the answers, but one thing we do know. Is that we need a president who is going to do everything to work with statewide officials all over this country to make sure that when people cast a vote in November that vote is going to count. Congress has allocated money to beef up and strengthen the protection of our electoral system. The president has got to be aggressive in implementing that. We have a lot of work to do, but the integrity of American democracy is at stake. And we have got to do everything that we can to protect the integrity of our election.

MARGARET BRENNAN: Senator Sanders and Ms. Alexandria Ocasio-Cortez thank you so much for joining us in this exciting joint interview. Good to speak to you both. We'll be back in a moment.

9/26: Face the Nation with Margaret Brennan