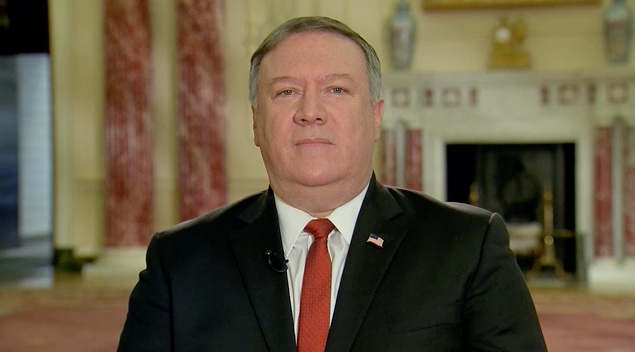 The following is a transcript of the interview with Secretary of State Mike Pompeo that aired Sunday, Nov. 4, 2018, on "Face the Nation."

SECRETARY OF STATE MIKE POMPEO: Well, John, good morning. That's right. The European companies will not be permitted to do business with both the United States and with Iran frankly since May since the president's announcement of withdrawal from the ill-fated agreement. European companies have fled Iran in great numbers. Hundreds of businesses have departed Iran. The whole world understands that these sanctions are real that they are important that they drive the Iranian people's opportunity to make the changes in Iran that they so desperately want and stop Iran from having the wealth and money that they need to continue to foment terror around the world.

SEC. POMPEO: That's right. These- these sanctions apply to those who conduct sanctionable transactions. The Treasury has a set of sanctions the State Department has its own set of sanctions and those will all come back into place on Monday of this week and they'll be the toughest sanctions ever placed against the Islamic Republic of Iran.

JOHN DICKERSON: The president put out a poster of himself and said sanctions are coming. What was that about?

JOHN DICKERSON: What if they restart their nuclear program in Iran?

SEC. POMPEO: We're confident that the Iranians will not- not make that decision.

JOHN DICKERSON: Let me ask you a question about North Korea. You have talks this week. North Korea is saying they might restart their nuclear program if the U.S. does not start lifting sanctions. Is it still the U.S. position that North Korea will not see any economic sanctions lift until there is complete denuclearization?

SEC. POMPEO: So, John I will- I'll be in New York City at the end of this week meeting with my counterpart Kim Yong-Chol I expect we'll make some real progress including an effort to make sure that the summit between our two leaders can take place where we can make substantial steps towards denuclearization. John we have to remember and the American people need to remember the North Koreans haven't launched a missile haven't conducted a nuclear test. They allowed the return of American remains. We've had success in just the handful of months since this past June and we continue to make good progress I'm confident that we'll advance the ball again this week when I'm in New York City.

JOHN DICKERSON: Mr. Secretary you said that- that North Korea will not see any economic sanctions lifted until it has demonstrated complete denuclearization. Is that still your position?

SEC. POMPEO: It is not only complete denuclearization, but our capacity to verify that that has taken place, is also a prerequisite to lifting economic sanctions.

JOHN DICKERSON: Let me ask you about the- the caravan at the U.S. southern border. General Colin Powell said, "I see no threat requiring that- this kind of deployment," he's referring there to the deployment of troops from the Pentagon. Retired General Martin Dempsey said, "it was a wasteful deployment of overstretched soldiers and Marines." What's your response?

SEC. POMPEO: It's a problem that's gone on too long. President Trump is determined to ensure that we have sovereignty of America at our southern border and that we protect our American border. As the Secretary of State, I- I've been very involved in working with the governments in Guatemala, Honduras, El Salvador, and certainly the government of Mexico, and I've also had the chance to speak with the incoming government that is now 26 days out from taking power in Mexico. We've made clear to them they need to undertake every effort they can to stop this illegal migration from entering the United States, and the president's made very clear they will not be permitted to enter our country unlawfully. If they want to —

SEC. POMPEO: — but illegal immigration will not be permitted.

JOHN DICKERSON: The charge here, Mr. Secretary, is that the president is thinking about this in political terms and that's why he's done this deployment. All of this rhetoric this week, do you think he thinks about it in political terms, this caravan, and how it might benefit the Republicans?

SEC. POMPEO: I've been involved in scores of conversations about stopping illegal immigration from Mexico and- and never once has there been a discussion of the political impact in U.S. domestic politics. It has always —

SEC. POMPEO: — been about securing the safety of the American people and securing our southern border.

JOHN DICKERSON: So if that's never happened why then did the president in a rally said, speaking about the caravan, "did they energize our base or what?"

SEC. POMPEO: President's been trying diligently to get our foolish immigration laws changed since he took office. He talked about this, this campaign. Many of the challenges we face today with illegal immigration are because we have a set of rules, a set of laws that don't allow us to fully secure that southern border. The president is working through the proper process, the Constitution political process to make those changes to the laws, and he is very hopeful, I think, that when Congress returns in January there will be a Congress prepared to support his efforts to secure —

JOHN DICKERSON: — but you would agree —

JOHN DICKERSON: You would agree that the president thinks this is a benefit for his base, which he says has been energized by this caravan and his response to it. So it seems like he does see it as a political benefit.

SEC. POMPEO: As the Secretary of State, I want to talk about American national security. We are determined to secure the southern border, John.

JOHN DICKERSON: Okay, I'll take that lack of response as a yes. Final question, Mr. Secretary, is on Saudi Arabia. You are waiting for more investigation on the death of columnist Jamal Khashoggi, what more needs to be answered?

SEC. POMPEO: Still have lots of work to do to figure out the full range of persons that need to be held accountable. We're working with the Turkish government, with the Saudi government, and with anyone else who has relevant facts for us to be able to determine all of those who were responsible for this atrocious murder of Jamal Khashoggi, which the Saudis themselves now acknowledge was premeditated. We need to get to the bottom of it. We need to find out who was responsible, hold them accountable and do all of this, John, while protecting the enormously important strategic interest the United States maintains with the Kingdom of Saudi Arabia. We began our conversation about Iran — the Kingdom of Saudi Arabia has been an important partner for the United States in attempting to change the behavior of the world's largest state sponsor of terror from that Islamic republic.

JOHN DICKERSON: Very briefly, is it still possible the Crown Prince could be involved in this?

SEC. POMPEO: We're going to chase the facts wherever they go —

SEC. POMPEO: — and we're going to hold accountable each of those who we find responsible.

JOHN DICKERSON: Mr. Secretary we're very grateful thanks so much for being with us.