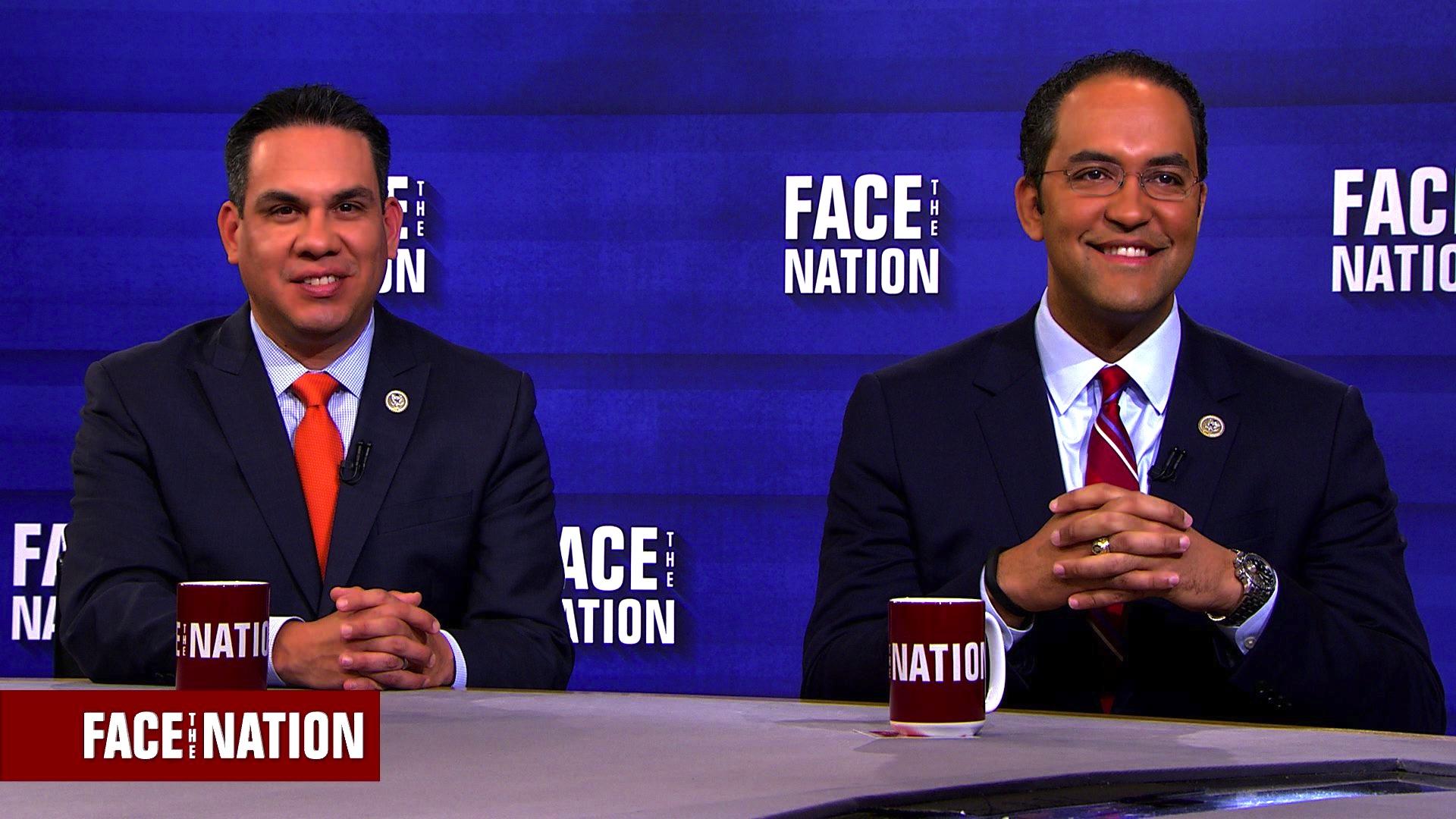 The president's legislative framework on immigration is drawing fire from both sides, with liberals accusing the administration of holding "Dreamers" hostage and conservatives saying President Trump is selling out his base. The proposal would extend protections for 1.8 million Dreamers, boost spending for border security and cut legal immigration levels.

Reps. Will Hurd, R-Texas, and Pete Aguilar, D-California, are co-sponsors of the only bipartisan immigration bill in the House. They joined us to discuss their proposal, the president's priorities and the prospects for reaching a deal.

The following is a transcript of the interview with Hurd and Aguilar that aired Sunday, Jan. 28, 2018, on "Face the Nation."

NANCY CORDES: And we're joined now by the authors of the only bipartisan Dreamer proposal in the House. Congressman Will Hurd is a Republican from Texas, and Pete Aguilar is a Democrat from California. Welcome to you both.

WILL HURD: Thanks for having us.

PETE AGUILAR: Thanks for having us.

NANCY CORDES: Gentlemen, I want to talk about your plan in a moment. But first, is the president's proposal a step forward? And in what ways is it a step back?

WILL HURD: Well I think -- I appreciate the president putting this plan forward and narrowing what he would like to see in a bipartisan solution to this issue of Dreamers and DACA and also border security. I still believe that a narrow bill is most important; the thing that we can get through our Congress, both houses, in the House and in the Senate. Because the more things you add, you start creating coalitions of opposition. And so let's keep this narrow. Let's get it done in the next couple of days and go on to the next issue.

PETE AGUILAR: It's true. The most important thing we can do is to protect Dreamers. So I do appreciate that it addresses that issue. But some of the changes that they are proposing are devastating to our immigration system, and I feel are better left for comprehensive immigration reform. So let's keep it narrow, as Will mentioned. Let's focus on DACA fix and border security and move on and get those issues off to the next day.

NANCY CORDES: So here's what you've proposed, and so far, you've got 53 sponsors, evenly split between Democrats and Republicans in the House. You would allow Dreamers to apply for permanent residency. You would increase border security, though not by as much as the president's proposal. You would not give the parents of Dreamers legal status. Essentially, this is a bill that is much more focused on the DACA population rather than being a conservative immigration wish list.

WILL HURD: Well, I'd start with, this is strong border security. This is not an appropriations bill. Because we've always said let's deal with the authorization, let's deal with how we secure our border. It's 2018 and we have not gotten operational control of our border. I have more border than any other member of Congress; 820 miles of it.

And we don't have control, and we should. And we should be utilizing some of the latest and greatest technology along that border. So this bill - this plan does that, as well as fixing this problem for a population that have gotten here through no fault of their own.

NANCY CORDES: Do you both think that if the House speaker were to allow a vote on your bill, it would pass?

WILL HURD: Without a doubt. This is the only bill that would have 218 votes on the House floor. We feel very confident about that. We've had numbers of discussions with our colleagues. But this is the type of bipartisan approach that the American public wants to see. And it's important that if we're going to fix this DACA issue and add border security, this is the type of narrow focus that can get 218 votes and can get to the president's desk.

NANCY CORDES: But don't you think the fact that he has said nothing about it publicly, he's aware of it, is an indication of the political constraints that he faces? There are some conservatives who say that if he were to back something that doesn't get a majority of the majority, he loses speakership.

WILL HURD: Well, but you're assuming that this can't get the majority of the majority, and I don't - I don't agree with that - with that presumption. Also, the fact that the president has come out and said let's make sure that there's a permanent legislative fix for 1.8 million kids, I think that also gives some credence in many of the proposals that we're forwarding in the U.S.A. Act.

PETE AGUILAR: This is exactly what the president asked for. This is a D.A.C.A. fix with sensible border security. These are common sense measures. This is the type of proposal that should garner a signature and that he should support. And we feel that we can make our case to our colleagues to get that done.

NANCY CORDES: So is your focus right now on pushing your plan or on trying to get some of your ideas worked into these bipartisan negotiations that are going on among Republican and Democrat leaders?

PETE AGUILAR: We should both. We've said from the beginning that this should be the foundation for the discussions that we have. So we've had conversations with senators about our proposal. We hope that this becomes the base for what is being discussed. We're open to making some changes, as long as it garners support in the Senate and it gets to the president's desk. That's been our focus. That's what we've been working on for weeks, behind the scenes. And we feel that we're making good progress.

NANCY CORDES: What happens if we get to March 5th and DACA is set to expire and there is no new legislation?

WILL HURD: It's a good question and I hope we don't get there. And I think you've seen many folks in the White House have said that we don't want to get there. I don't think anybody in Congress wants to get there. That's why we need to buckle up, sort this out over the next few days, and I think we have a couple of weeks, and get this done before that March deadline.

NANCY CORDES: But here's what a White House official also said this week. He said come March 5th, if there's no D.A.C.A. deal, the White House will not direct I.C.E. and D.H.S. to deport Dreamers, but if they are swept up in a raid, they will be deported. They are not protected. If you're a D.A.C.A. recipient, that's pretty scary stuff.

PETE AGUILAR: It's flat-out unacceptable. We can't have policies that deport Dreamers. We shouldn't stand for it. That's exactly why we're working so hard to get this done. But let's also keep in mind, three Homeland Security secretaries have told us and Congress that it's going to take time to write these policies and proposals once we have an agreement and a deal. So we need to get this done quickly. We need to offer the certainty that they're due for this Dreamer population to make sure that that situation does not happen. That's why we're working so hard and that's why you see efforts in the House and the Senate, in a bipartisan basis, to get this done.

NANCY CORDES: Congressman Hurd, I want to ask you, because you're on the House Intelligence Committee, have you seen this memo that alleges that the F.B.I.'s Russia investigation is based on flawed sources and methods, implies that the investigation is biased, and what do you think of its validity?

WILL HURD: Well, I have seen the memo. I'm one of the people that voted to release the memo to the rest of our colleagues in the House so that they understand what we're looking at. For me, this is - I spent almost a decade as an undercover officer in the C.I.A. I was the guy in the back alleys at 4:00 in the morning, collecting intelligence on threats to our homeland.

I've served shoulder to shoulder with the men and women in the F.B.I. And the rank-and-file folks are putting us and keeping us safe. What we have to make sure is that the political leadership of these organizations are crossing all the T's and dotting all the I's.

NANCY CORDES: Is this hurting your morale? Quickly.

WILL HURD: I don't know the answer to that. But I think what - what every rank-and-file member of the F.B.I. wants to ensure is that everybody within that organization is following the law to its letter.

NANCY CORDES: Got it. Thank you so much, Congressman Hurd. Congressman Aguilar, thank you for changing your weekend plans to be with us. We really appreciate it.

WILL HURD: Thank you.