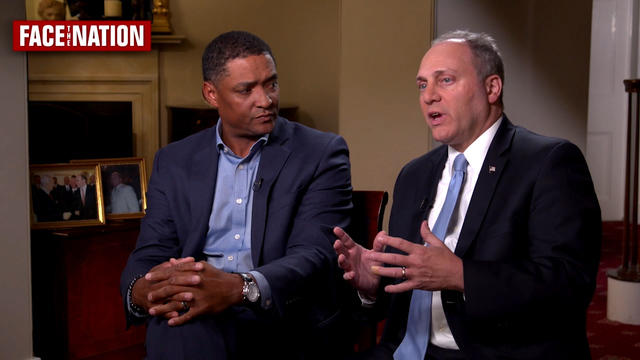 House Majority Whip Steve Scalise played in the annual congressional baseball game this week, one year after he was nearly killed by a gunman while practicing for last year's game.

Scalise and Democratic Rep. Cedric Richmond met while both served in the Louisiana legislature. They both joined us to discuss the shooting, their friendship and the current state of discourse in Washington.

The following is a transcript of the interview with Scalise and Richmond that aired Sunday, June 17, 2018, on "Face the Nation."

MARGARET BRENNAN: They've been called the Bayou Brothers: Democrat Cedric Richmond and Republican Steve Scalise have been friends since they served in the Louisiana statehouse; now they're both eyeing higher leadership roles in the U.S. Congress. A year ago, Scalise was critically wounded in an attack on Republican members of Congress practicing for a charity baseball game. Richmond was the first person to get to Scalise's side after he arrived at the hospital, their friendship proving that even those divided in politics, can still be good friends. We spoke with them earlier.

MARGARET BRENNAN: So many people look at that shooting, the political motivations behind it, as reflective of the divisions in this country. But you're sitting here talking about being close friends despite this divide. Which is more reflective of where we are right now as a country?

MAJ. WHIP STEVE SCALISE: We're a divided nation right now. But, if you look back at the history of our country, I mean, our founders set up a system of government where, with the rights of free speech, the - the ability - you can go out and disagree with people and you can actually express those disagreements. In many countries you can't. The difference is you - number one, you should never make those disagreements personal. But there's no excuse, it's completely unacceptable, to resort to violence to try to resolve some kind of disagreement when you have somebody with - that you have with them politically.

REP. CEDRIC RICHMOND: Well, look, the division in this country right now, I believe, is at one of the highest peaks during my generation, and hopefully we can start to bridge that divide by leading by example. And it will have to come from Congress. That's clear. But we just need to make sure that we judge people by a whole bunch of factors, but it shouldn't be political parties, shouldn't be race, shouldn't be gender, shouldn't be sexual orientation. It should just be whether the person is a nice person or not. And to the extent that you agree that the person is a nice person, then you try to find common ground. And look, Steve and I - our battles, even our plane rides home, when we talk about issues, it's clear we don't necessarily agree on most of them how to get there. And-

MARGARET BRENNAN: Do you argue?

REP. SCALISE: I win all the arguments but, I mean, he still keeps voting the wrong way.

REP. RICHMOND: Well - the good news is, we look at the Affordable Care Act, and we look at how it's improving lives around the country, and I get to--

REP. SCALISE: And doubling the cost of healthcare every year.

REP. RICHMOND: I get to say – no, that's only because you all have gutted all the good things in it that keeps costs down. But so we have this, a lot, where we talk about issues, and you know, we tease each other a lot. We like to say that Democrats are tax and spend Democrats, although they just spent two trillion dollars on a tax cut that they didn't pay for--

REP. SCALISE: Spending money by giving people their money back. You know, interesting, when he only cares about the deficit when it involves letting people have their own money back.

REP. RICHMOND: Well, you know, you have to pay for two trillion dollars that's a lot of money.

REP. SCALISE: You do it by growing the economy.

REP. RICHMOND: So he likes to win arguments. I win the baseball games.

REP. SCALISE: We'll give him the trophy. You know there's a trophy for showing up. We'll give that to Cedric. We'll win the policy.

REP. RICHMOND: You know, for now. But look, November 6th right around the corner.

MARGARET BRENNAN: What's the over-under on that? Do you place bets on things like that?

MARGARET BRENNAN: I know you've talked about it.

REP. SCALISE: --wins reelection in his district somehow, and I'll win re-election in mine. We're going to hold the House though.

MARGARET BRENNAN: You're not betting on him as speaker? You said he would be a good speaker if he wanted to step into this race.

REP. SCALISE: Cedric would make a great minority leader. When we hold the majority, I look forward to having Cedric work with us. He'll be - he'll be minority leader maybe, but he - he and I'll be able to work on - work on a number of things.

MARGARET BRENNAN: What about on immigration?

MARGARET BRENNAN: Do you have any points of agreement?

REP. SCALISE: I mean, shouldn't we secure the border? I'm sure in our bill we're going to make sure we build the wall. And we also solve the DACA problem, but we fix some of the problems that stop us from securing the border. A lot of the interi - internal security measures - Secretary Nielsen of Homeland Security has identified so many different loopholes that make it hard to actually secure America's border. Let's fix those.

MARGARET BRENNAN: But do you think for the country it's important have a vote on immigration ahead of November for both parties?

REP. RICHMOND: Well I - I think so because I think the American people should know where we are. I mean, the head of their party who occupies the White House said very early on, "If you give me border security, if you give me a wall, then I'm willing to create a pathway to citizenship for DACAs. If you all get it passed I'll sign it." But then - and this is where it always gets contentious - he throws in the Diversity Visa Program, which is the largest program in which African-Americans come to this country. They're better educated than even American children when they get here. So, you know, those are the hard things. His role in - in Congress gets complicated a little bit because you have to introduce the president. If we didn't have a White House involved, I think there are a bunch of issues we could have - we could come together on.

MARGARET BRENNAN: We also spoke with the two about their different perspectives on both President Trump and race in America. That conversation is available on our website, FaceTheNation.com.