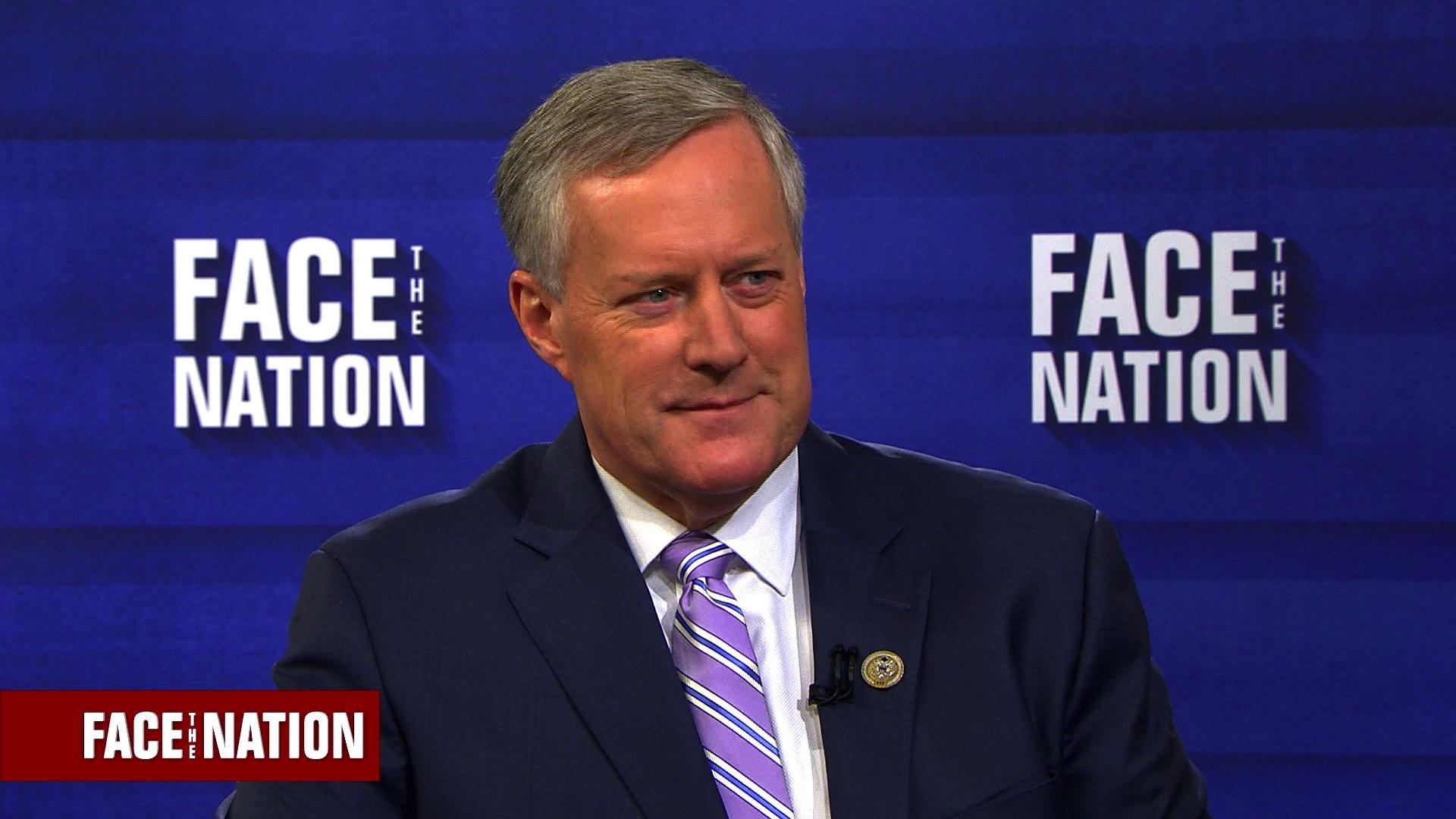 The two-year, $400 billion budget deal approved by Congress and signed by President Trump drew fire in the House for liberals and conservatives alike. Democrats objected to the bill for its failure to include protections for "Dreamers," while conservative GOP members balked at increasing the deficit.

Rep. Mark Meadows was in the latter camp. Meadows is chairman of the House Freedom Caucus, a group of conservative members who have long been opposed to spending increases. He joined us to discuss the new budget deal, the negotiations that led up to it and the path forward from here.

The following is a transcript of the interview with Meadows that aired Sunday, Feb. 11, 2018, on "Face the Nation."

MAJOR GARRETT: Welcome back. We're joined now by North Carolina Republican Mark Meadows. He is the chairman of the Conservative House Freedom Caucus. His group was very much opposed -- well, that's putting it mildly --  to last week's budget agreement. Congressman, thanks for being with us.

REP. MARK MEADOWS: Great to be with you, Major.

MAJOR GARRETT: So, a lot of spending and declarations that- that means the death now or is the House Freedom Caucus is toast?

REP. MARK MEADOWS: Well, I think we've - we've had a number of articles written about our demise for many, many years, and yet we are still here fighting on behalf of the millions of Americans who feel like Washington D.C. has forgotten them. But I can tell you the real problem with this particular one is that our leadership caved. The swamp won. And the American taxpayer lost. And there no other way--

REP. MARK MEADOWS: Without a doubt. I mean without a doubt. Our original play was to make sure that we funded the military, we kept other spending flat. That's what we passed, and yet what we got put on the House floor just a few hours later was this unbelievable budget deal that spent American taxpayer dollars.

MAJOR GARRETT: We got to go to break. But you said leadership. Do you want the speaker's job?

REP. MARK MEADOWS: No. I don't want the speaker's job. But I think at this particular point we have to have some real soul searching on what's going on.

MAJOR GARRETT: Congressman, we're going to take a quick break. I just warned you about that, but we've got a lot more questions when we come back.

Welcome back to Face the Nation. I'm Major Garrett. As promised, we continue our conversation with North Carolina Republican Mark Meadows, chair of the House Freedom Caucus, conservative side of the Republican--

REP. MARK MEADOWS: Without a doubt.

MAJOR GARRETT: Without a doubt. Yeah. You've also been mentioned, congressman, a lot of jobs. Chief of staff of the president of the United States. You want that job?

REP. MARK MEADOWS: You know, really, General Kelly is doing a great job. Contrary to a lot of the headlines that are out there. I can tell you that I don't believe his job is in jeopardy. I know that the president has not spoken to me or Mick Mulvaney about replacing him. In fact, quite the opposite in my conversations with the president. He has expressed confidence in General Kelly, and certainly he's brought order and responsibility to the White House.

MAJOR GARRETT: One thing I have heard about General Kelly is that he is not as adept in politics as perhaps a chief of staff should be. Do you worry about that?

REP. MARK MEADOWS: Nor should he be. He was a general.

MAJOR GARRETT: From your point of view, is that an important part of the job?

REP. MARK MEADOWS: Well, it's an important part of the job. But I think it's incumbent upon all of us to make sure that we give him the political backdrop that maybe some of these decisions are being made. I know that he has reached out to me a number of times on a number of different issues, and so, he's not managing in a vacuum. He's truly trying to make sure that the president gets the best information. I believe he does that.

MAJOR GARRETT: Could the president have fought harder on this budget deal?

REP. MARK MEADOWS: Well I think the president was faced with--

MAJOR GARRETT: Were you expecting him to fight?

REP. MARK MEADOWS: Well, I was expecting him to continue to push back on draining the swamp, and but yet, he was given a binary choice: either you support the military and support this particular budget or you don't. And I can tell you that that's not the choice that many of us on Capitol Hill believed was before us. It was either supporting the military or continuing what I would say the traditions of the Senate. At some point we're going to have to say: "Mitch McConnell, enough is enough. Fifty-one votes on anything that is of national security interest. It is time that we change this." The American people, your viewers right now, could care less about their traditions of the Senate, they do care about their pocketbook. And what we've done is we've actually taken money from them to grow the size of government by almost 13 percent. You know, Major, I can't believe it.

MAJOR GARRETT: So, without putting too fine a point on it. How deep is the swamp now?

REP. MARK MEADOWS: Is obviously deeper. But when you look at 300 bill --

REP. MARK MEADOWS: But when you look at 300 billion over a ten-year period, you know it makes even a drunken sailor blush. And the problem with that is the drunken sailor actually spent his own money. We've got the government spending yours.

MAJOR GARRETT: Bottom line for House Freedom Caucus once something comes from the Senate. What must it have to get through the House of Representatives?

REP. MARK MEADOWS: Well, the speaker of the House needs to do what he said he would do and that is the whip, the Goodlatte-Labrador bill, put it on the floor. Make sure that it passes out of out of the House. We are the most conservative body, and we've got a bill ready to go and in --

MAJOR GARRETT: In other words the speaker should not wait for the Senate. Do that now.

REP. MARK MEADOWS: Absolutely not. If we're going to wait for the Senate why don't we all go home take naps and wait for 60 senators to decide what we're going to do as a nation? I didn't sign up for that. And most people didn't, that elected me, didn't want me to sign up for that. So, it's critical that we go ahead and work. And that's where you go to see the Freedom Caucus engaging over the next couple of weeks. We're going to engage and hold our speaker to his word, which said that he was going to whip the Goodlatte bill and make sure that it has the threshold and then send it to the Senate.

MAJOR GARRETT: You're very good at this, in 15 seconds what's in the bill? The four pillars?

REP. MARK MEADOWS: Well, the four pillars are in there. But the biggest thing is it puts an emphasis on border security and not creating a special pathway to citizenship.

MAJOR GARRETT: Very good. Congressman, thanks so much for joining us.

MAJOR GARRETT: Good to have you on Face the Nation we'll be back with our panel. Please stay with us.