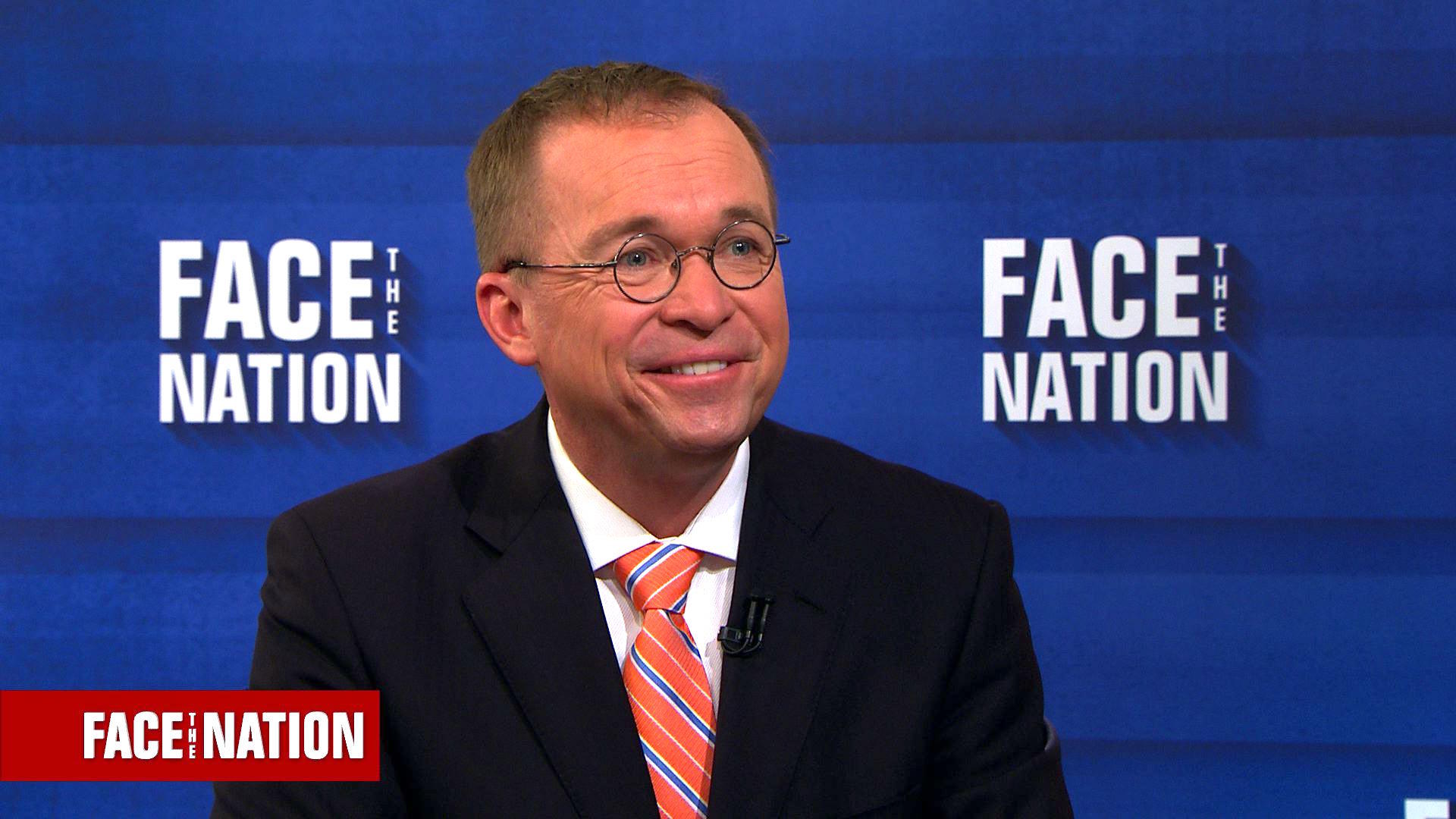 As head of the Office of Management and Budget at the White House, Mick Mulvaney was responsible for overseeing the government to shut down Friday when Congress failed to reach a spending deal ahead of a midnight deadline. But the shutdown was short-lived, with both chambers voting on a two-year budget deal that calls for increases in defense and domestic spending to the tune of $400 billion.

Mulvaney, who is also the acting director of the Consumer Financial Protection Bureau, joined us to discuss the budget deal, its effects on the deficit and this week's turmoil among the White House staff.

The following is a transcript of the interview with Mulvaney that aired Sunday, Feb. 11, 2018, on "Face the Nation."

MAJOR GARRETT: Joining us now is White House Budget Director Mick Mulvaney. He was also the acting director of the Consumer Financial Protection Board. Mr. Director, those issues are important, but first, it's a bad week for the White House in terms of personnel. Why shouldn't women reasonably wonder if this White House doesn't have a lax attitude when it comes to the question of domestic abuse?

MICK MULVANEY: I don't think we have a lax attitude. I think what you saw happened this week, Major, was completely reasonable and normal. The president--

MICK MULVANEY: Let me explain that. The president had someone working for him who came to him and said: "Look, I've been accused of this. I've been falsely accused of this. Please don't believe it it's not true." If your cameraman came to you and said that to you, you probably would give that person the benefit the doubt or at least you want to do that because you know that person and you trust that person. That's what the president did up until the time that it became obvious when the photographs came out that the person was not being honest with the president. And that person after that happened, we dismissed that person immediately so that- that's an ordinary and very human reaction to the- to the set of circumstances. You don't want to throw people out on the street based just upon the allegation. But as soon as it became apparent us that the allegations were true, Rob Porter had to go.

MAJOR GARRETT: In other words Rob Porter deceived the Chief of Staff of the president of the United States.

MICK MULVANEY: I think that under the circumstances, he wasn't entirely forthcoming with him and I think the photographs took everybody by surprise.

MAJOR GARRETT: Was there a blind spot because of the reputation Rob Porter had in the White House?

MICK MULVANEY: No I think the president and the chief of staff -- I am much more likely to believe people not based on their gender but based on their relationship with them. If Kellyanne Conway had come to the president and said something we'd be more inclined to believe that person than the person that we don't know. Again I think that's very natural human reaction to the circumstances

MAJOR GARRETT: In this climate, do you think the president missed an opportunity and may have insulted people by not at least recognizing the victims in this situation, Rob Porter's ex-wives and the wife of David Sorenson who are victims?

MICK MULVANEY: I think what you saw the president go through this week, and I don't know if you all played the video of the speech that he gave of that comment that he made. He was extraordinarily saddened by this. He's been let down --

MAJOR GARRETT: On behalf of Rob.

MICK MULVANEY: He's been let down by somebody who he trusted somebody who he put in a place of authority and then wasn't told the truth. I think that's sad and the president. I think you saw that this week

MICK MULVANEY: Yeah and again I keep telling you and we've had these conversations before that to watch the media cover the West Wing and then go to work there is like night and day. And to believe the media that there's complete disarray, there's a bunch of infighting. And it's simply not the case that the West Wing continues to function. It functions well. I hear that I'm being considered, in the media at least, for replacing the chief of staff or you think that maybe someone would have mentioned it to me. No one's talked to me at all. Not a single time.

MAJOR GARRETT: How badly you don't want that job?

MAJOR GARRETT: Last week in the midst of all this John Kelly served the president well.

MICK MULVANEY: I believe so under the circumstances of having someone who is close to you--

MAJOR GARRETT: Even with that statement that says he's a man of true integrity?

MICK MULVANEY: You're going to want to believe and trust the people that are close to you and that you know. You see, I think the problem here was with Mr. Porter, not with the chief of staff.

MAJOR GARRETT: All right. Let's go to the budget. Why is spending this money now and having deficits projected at more than a trillion dollars in a growing non-recessionary economy that is already jittered Wall Street for a full week a good idea?

MICK MULVANEY: It's a very dangerous idea, but it's the world we live in. Here's what happens. We want money to defend the nation. We believe General Mattis has made a case, I think to both Democrats and Republicans and to the public alike, that we need more money to defend the nation against things like the threats from the North Koreans. We were hoping that we could sit down with the Democrats and figure out a way to get additional funds to the military to respond to these threats. Publicly the Democrats said they wanted to help fund the Defense Department. Privately, though, what they said was they would not give us a single additional dollar for defense unless we gave them dollar for social programs.

MAJOR GARRETT: You knew they were going to say that.

MICK MULVANEY: Well, publicly they were not saying that. Publicly they were saying they wanted to defend the nation. They'll say that Democrats care as much about defense as Republicans do, but when the rubber meets the road they don't. They held the Defense Department hostage, and we had to pay that ransom.

MAJOR GARRETT: Congressman Mick Mulvaney, would have voted for this?

MICK MULVANEY: Oh, probably not. But keep in mind I'm not Congressman Mick Mulvaney anymore. I'm much closer to Mr. Meadows who you're going to have on the show a little bit when I was a member of Congress. My job as the director of the Office of Management Budget is to try to get the president's agenda passed. And right now the top priority for this president was getting the Defense Department the money necessary to defend the nation.

MAJOR GARRETT: Let me ask you about your other job, acting director Consumer Financial Protection Board. It has been alleged that you have stopped that agency's investigation to Equifax. Have you?

MICK MULVANEY: I have to give you a legal answer to that. If you ask somebody at the FBI about an ongoing investigation, you'll hear the same you heard from me, which is that I cannot comment on whether or whether or not there is an investigation.

MAJOR GARRETT: Thirty senators believe you have and have written to you to that effect.

MAJOR GARRETT: Where does Equifax and that data breach that affected 140 million Americans fall in your list of priorities for this agency you are now running?

MAJOR GARRETT: When you say protect consumers can you define that? Because there are those who look at your attitude and what you've done there with payday lenders and possibly Equifax as taking a complete step back.

MICK MULVANEY: What we've done over there John.

MAJOR GARRETT: He used to be here.

MICK MULVANEY: He used to be here. What we've done here is we've tried to figure out a way to manage this bureau. This bureau is unlike any other federal bureaucracy. It's run by one person. Right now me. It has almost unlimited access to funds. It has no accountability to Congress. It is perhaps the most unaccountable bureau or agency there is. We want to run that place with a good deal of humility and prudence. We're not being aggressive, we're not pushing the envelope. We're taking a different attitude towards the job. But the priorities have not changed.

MAJOR GARRETT: Again, how would you define consumer protection under your leadership? What does that mean? What will people be protected from that they should be afraid of?

MICK MULVANEY: They should be protected from fraud.

MAJOR GARRETT: By implication are you saying that's what the previous director did?

MICK MULVANEY: It's not implication. I'm saying it straight out.

MAJOR GARRETT: Thanks for joining us on Face the Nation.