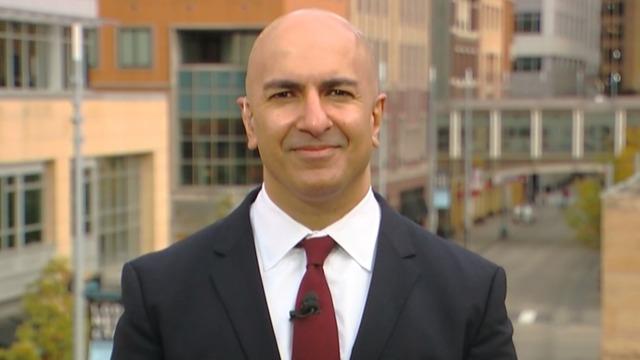 The following is a transcript of an interview with Minneapolis Federal Reserve Bank President Neel Kashkari that aired Sunday, October 11, 2020, on "Face the Nation."

MARGARET BRENNAN: Negotiations between the House, the Senate and the White House over a new coronavirus relief package continue, but the prospects of getting an agreement, at least before Election Day continue to look bleak. Neel Kashkari is the head of the Federal Reserve Bank of Minneapolis and joins us now. Good morning to you.

MARGARET BRENNAN: So there's just short of about two trillion dollars on the line here. This would have included aid to airlines, more jobless benefits, expansion of help to small businesses. Without that, what's the cost to the American economy? What's going to happen?

KASHKARI: Well, we're going to continue to see a grinding, very slow recovery with thousands of small businesses around the country going bankrupt. That's why it's so vital that our elected leaders come together to take more action. You know, the job market today, 11 million Americans are still out of work relative to the job market in February. That is as bad as the worst job market during the Great Recession and the great financial crisis. And so a lot of people are suffering. A lot of small businesses are suffering. And just listening to Dr. Gottlieb, it seems like we're at about the halfway point of getting through this pandemic. So more assistance is definitely needed.

MARGARET BRENNAN: Why isn't the urgency that you feel getting through to lawmakers?

KASHKARI: Well, obviously, I mean, I'll defer to the political experts on the political negotiations, and obviously we're close to an election. So I imagine that those things are getting involved in the dynamic. But if you look at the data, the data is very clear. The recovery, the strong recovery that we saw in June and July, has really flattened out. The virus is climbing now again around the country, especially here in my region, in Minnesota, the Dakotas, Wisconsin. And so you're seeing consumers pull back and not want to go out, and not want to take that risk again. And so, unfortunately, we still have a long way to go in this pandemic, and that means we need continued assistance.

MARGARET BRENNAN: So this morning from- from the White House, Larry Kudlow said again that what he's seeing is a V-shaped economic recovery coming right back. You're talking about flashing yellow lights. Why are you- what is it that you see that worries you?

KASHKARI: Well, I'm seeing- especially on the small business front, I mean, some sectors of the economy are doing fine. If you are a white collar worker like I am, like you are, you're able to work from home. You're really not affected by this pandemic. But there are many sectors of the economy that are still being devastated. The travel and tourism industries, the front line service industries, restaurants, and that's where you're seeing big job losses and bankruptcies. And this is going to continue to spiral and continue to- to bleed on. You know, if 11 million Americans can't pay their bills, can't put food on the table, can't make their credit card payments, their car payments, that- that has spillover effects to other sectors of the economy. The reason the economy bounced back as strongly as it did in June and July is because Congress was so aggressive in the spring. We need Congress to continue to be aggressive so that the recovery can be stronger.

MARGARET BRENNAN: You know one- one number that is- is- really stands out to me is this. 865,000 women have left the workforce since the pandemic began eight months ago. Compared to that, it's 216,000 men. Women are leading this recession. McKinsey- McKinsey says two million women are going to leave the workforce, potentially, because of childcare issues. This is having a massive social impact. How long does that last?

KASHKARI: Well, you're exactly right, MARGARET. If you look at the- the great financial crisis, it took 10 years, 10 years to rebuild the labor market, to bring back all of those workers who got dislocated, to re-engage them, get them employed again and get the economy moving again. That's obviously terrible for them and their families, but it also holds back the economy's potential. And that's why more aggressive assistance now to keep people re-engaged, to keep them attached so that our labor market can recover more quickly, it's- it's of paramount importance, again, for those families directly affected, but actually for the economy as a whole and for all of us.

MARGARET BRENNAN: And any family is affected that has a child, clearly. When you are talking about who is getting hit, it's women. It's also Black and Hispanic workers who have suffered the greatest number of job losses. Is that inequality- some of it preexisted this- this pandemic, is that something the Fed can fix?

KASHKARI: We cannot fix it alone. I mean, we can do our part by trying to make the labor market, and the recovery as strong as we can using our broad based tools like lowering interest rates and quantitative easing. But we don't have the ability to target the assistance to one group, or one region, or one sector. Only Congress can do that. And it's- it's much cheaper if you can keep people whole on the front end. Then if you- we have these continued layoffs and these continued bankruptcies, to try to rebuild it on the back end.That ends up taking a lot longer. That actually ends up being more expensive for the taxpayers.

MARGARET BRENNAN: Well, Senate Republicans continue to argue, though, that that, as you say, making the money available on the front end, though, could potentially be worse for them politically, that there would be a cost at the ballot box. Is there any economic cost, any economic merit to that?

KASHKARI: Well right- right now, the US government is able to borrow at very, very low rates. And so now is the time. If there's a need to run deficits, now is the time to go ahead and use that government's fiscal capacity to provide the assistance. And so there's no question over the long run we have to make changes. We have to make some decisions--

KASHKARI: --to get our fiscal house in order, to get some balance. But right now is the time to provide assistance.

MARGARET BRENNAN: Neel Kashkari, thank you for your insights. We'll be right back.

11/20: Face The Nation
Thanks for reading CBS NEWS.
Create your free account or log in
for more features.
View CBS News In
CBS News App Open
Chrome Safari Continue
Be the first to know
Get browser notifications for breaking news, live events, and exclusive reporting.