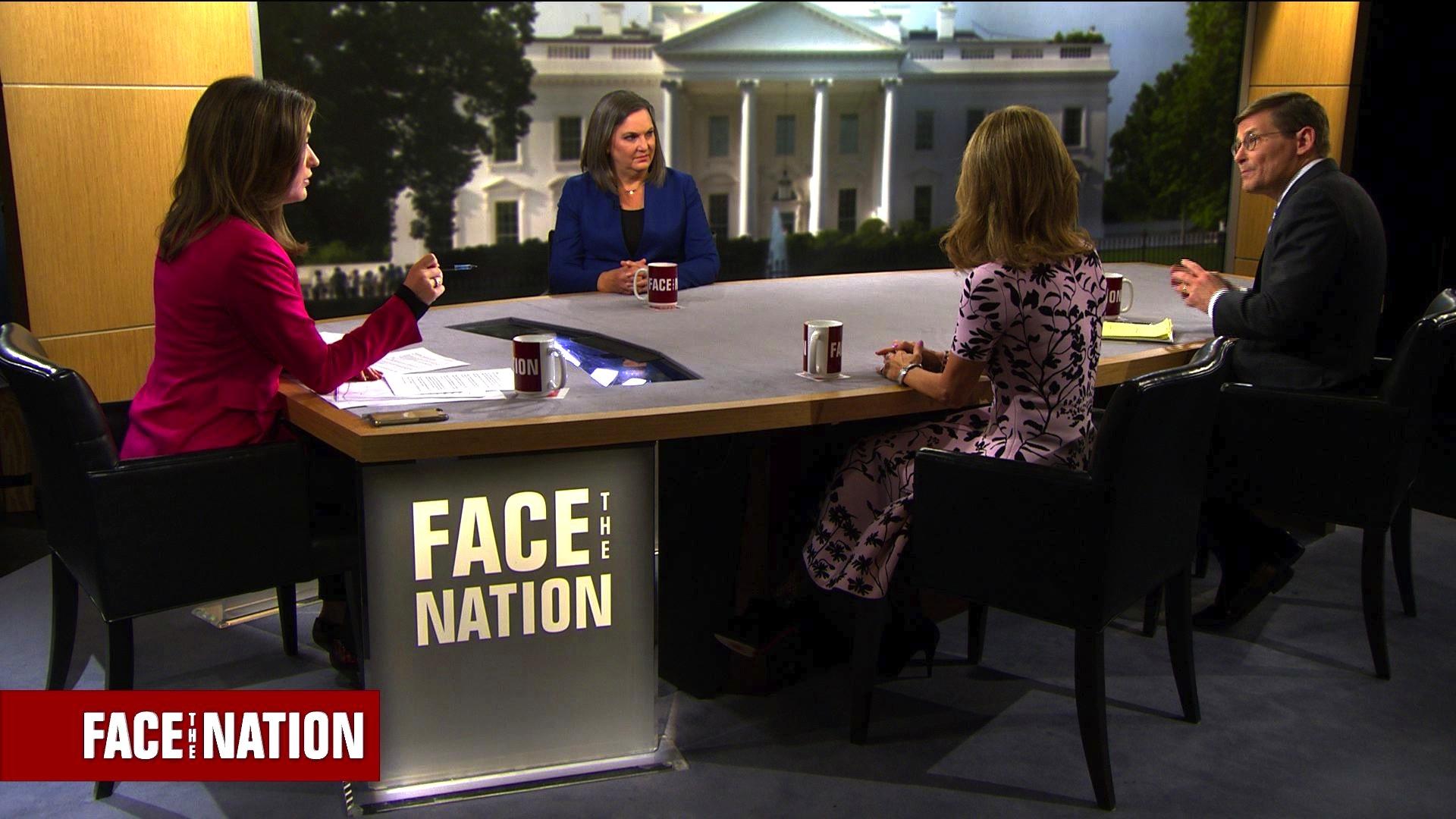 After one year in office, the Trump administration faces a looming threat posed by the North Korean and Iranian regimes, an ongoing fight to defeat ISIS caliphate and mounting pressure to prevent further Russian interference ahead of the 2018 midterm elections.

The following is a transcript of the roundtable discussion airing Sunday, Feb. 4, 2018, on "Face the Nation."

MARGARET BRENNAN: We turn now to a trio of experts to help us understand the impact of the memo's release. Fran Townsend was Homeland Security advisor to George W. Bush, and she is now a CBS News senior national security analyst. Michael Morell was C.I.A. Deputy Director and is now a CBS News senior national security contributor. And Victoria Nuland is a former assistant Secretary of State. She is now CEO at the Center for a New American Security. Welcome to all of you, this has been a confusing week for many people trying to follow the politics of this. Fran, can you tell us, I mean, is this FISA process as broken as Trey Gowdy describes, and should Americans be afraid they're getting spied on?

FRAN TOWNSEND: It's actually a quite robust process with many checks and balances along the way, including internally in the F.B.I. It goes through multiple legal checks. We ought to talk about the specifics, right? Carter Page, if you wanted to do the surveillance on him, you had to have probable cause that he was an agent of a foreign power, and in this case, Russia.

You had to have to make out that probable cause. If the Steele dossier was in there, you know, Trey Gowdy acknowledges that there was a footnote. He doesn't like the way it was worded, he doesn't think it was robust enough, but they did caveat that piece of evidence that they were relying on. But let's remember, he had been approached, the F.B.I. was aware in 2013. He had been approached by Russian intelligence agents, and they interviewed him. He had been very public in terms of his criticism of U.S. policy about Russia.

MARGARET BRENNAN: Mike, was this memo as damaging as some had feared? And if the Democrats release their version, is that also damaging?

MICHAEL MORELL: So I think there- there's kind of two points to set this up, Margaret. The first is that this didn't have to happen right now. The release of this memo did not have to happen, there was nothing that forced it. What should have happened here is that this be part of a final report of the committee with the facts laid out, here's what the Republicans think, here's what the Democrats think, that's the way it should have happened, right? That's point one.

Point two is there is classified information in this document, in those four pages. Trey Gowdy acknowledged some of it, right? There is- there is material in here that the F.B.I. would have removed had they had the opportunity. Put those two points together, you get three damages. The first is, it undermines the credibility of the F.B.I. in the public's eyes, and with no justification in my view. I share all of Fran's views on that point. Two is, it undermines the oversight process. How does it undermine- undermine the oversight process? Government agencies are not going to want to share sensitive information with Congress if they believe that Congress can release it on their own without going through the redaction process. And then the third is it undermines intelligence collection, because if you're a source of the United States or a foreign government giving us information, you're going to think twice about doing that if it's going to end up--

MARGARET BRENNAN: Mike, we're going to have to continue that thought on the other side of this break. Stay with us and we'll be right back with more from our panel.

MARGARET BRENNAN: Welcome back to Face the Nation, I'm Margaret Brennan. We'll continue our conversation now with national security panelists Fran Townsend, Michael Morell, and Victoria Nuland. Mike, I'll let you pick up the thought you left us on. If the Democrats release their memo, will it cause further damage?

MICHAEL MORELL: So when- when sources provide our government with sensitive information, or foreign governments provide us with sensitive information, they expect us to protect it. And when they see that information being released, when they see the- see the names of sources and documents being released, it gives them pause about whether they should continue to do that or not. I think the other really important point here, Margaret, is that what happened here underscores the partisanship and the dysfunction of a very important committee in Congress, and that does not serve Congress well, it doesn't serve the intelligence community, and it doesn't serve the country well.

MARGARET BRENNAN: Victoria, congressman Gowdy said they now have concerns about the state department. You served there until recently, do you know what he's talking about?

VICTORIA NULAND: I don't, I look forward to- to hearing what he's talking about. I will tell you though, Margaret, that during the Ukraine crisis in 2014 and '15, Chris Steele had a number of commercial clients who were asking him for reports on what was going on in Russia, what was going on Ukraine, what was going on between them. Chris had a friend at the state department and he offered us that reporting free, so that we could also benefit from it. It was one of, you know, hundreds of sources that we were using to try to understand what was going on. Then in the middle of July when he was doing this other work and became concerned...

VICTORIA NULAND: The dossier, he passed two to four pages of short points of what he was finding, and our immediate reaction to that was, "This is not in our purview. This needs to go to the F.B.I., if there is any concern here that one candidate or the election as a whole might be influenced by the Russian federation. That's something for the F.B.I. to investigate."

And that was our reaction when we saw this. It's not our- we can't evaluate this. And frankly, if every member of the campaign who the Russians tried to approach and tried to influence had gone to the F.B.I. as well in real time, we might not be in the mess we're in today.

MARGARET BRENNAN: When it comes to this memo, Senator John McCain said that, "It only serves Vladimir Putin's interests." You've spent a lot of your career watching Russia, is he right?

VICTORIA NULAND: He's absolutely right. This- what's most important is that we investigate what happened in the past, but even more importantly that we work together, the House, the Senate Intelligence Committees, the executive branch, the- our technology companies, to deter future Russian efforts to influence U.S. politics and elections. We should be working on the strategies that will blunt this, expose it. Some of our European partners have done better already than we have at this. In the French election, the Macron campaign immediately exposed what Russia was doing to their public, to their media, and that sunshine served as a disinfectant and blunted the Russian's ability to influence that election. That's what we should be doing here, and when we fight with each other, when we question our fundamental institutions, that is a great day for Vladimir Putin.

MARGARET BRENNAN: Mike, do you want to--

MICHAEL MORELL: I just want to add one point. Victoria's absolutely right. We have not deterred Putin, and one of the consequences of that is other countries are now getting into this business of weaponizing social media. So the Chinese are now doing this with the Taiwanese, the Turks are now doing this with the Turkish Diaspora in Europe. They're trying to influence them. This is going to spread because we have failed to deter Putin.

MARGARET BRENNAN: And Fran, there's also this question, which is why I asked you, "Should Americans be concerned of undermining U.S. institutions, a lack of trust now for the F.B.I." I mean, how do you reassure people?

FRAN TOWNSEND: Look, these are career public servants. You know, you may disagree, as Trey Gowdy says, with a particular decision Rod Rosenstein or Andrew McCabe made. But this is- these are thousands of people who've devoted decades to public service, to protecting us from this sort of influence to investigating it, and there are multiple legal checks. Including, let's remember, these- these packages for the FISA surveillance went to independent article three judges. Not one, this went to the court four times, and the judges do ask questions. It is in secret, because the proceedings are classified, as Mike points out. But the judges often ask for additional information, especially in the- in the case where the dossier was footnoted, it would have been drawn to the judge's attention. And so these public servants, what they care about is getting to the bottom and getting the facts, without- without fear or favor of politics. Oftentimes they're legally prohibited from political activity, and none of them engage in it. It really is about the facts of the investigation that drive them to protect the American people.

MARGARET BRENNAN: And from your perspective, the fact that Carter Page has been surveilled going all the way back to 2013 was enough to justify use of this dossier in application?

FRAN TOWNSEND: Look, I think you can take the dossier, based on what we know, I think you can take the dossier out of it. I disagree with Trey Gowdy, I think they probably had enough to establish probable cause without it. But if you were going to include it, they did the right thing by caveating it- caveating it in the footnote, even if Trey Gowdy disagrees with how detailed the footnote was.

MARGARET BRENNAN: Victoria, bigger picture, when you look at the Trump administration's policies so far on Russia, it's surprised some that it's been harder line in terms of promising weapons to Ukraine, perhaps more nuclear development in this latest gesture towards countering Russia's nuclear development and breaking some of our treaties. Have you been surprised by their policies so far? I mean, are you seeing any deterrents?

VICTORIA NULAND: Well, I think in the first instance our democracy is working with regard to Russia. You remember that there were, at the beginning of 2017, lots of noises out of the administration about lifting the Ukraine sanctions before we even got into a negotiation and without any leverage. It was the Congress that insisted that they stay in place and be used to try to negotiate the Russians out of Ukraine, which is what they were put on to begin with. Yes, I think it's very important that we now have the national security advisor, the secretary of state, the head of the C.I.A., the secretary of defense all saying that Russia is a real problem and that we need to contain and deter. That's what the national security strategy says. But it's going to take--

MARGARET BRENNAN: Do we need the president to say that?

VICTORIA NULAND: It's going to take presidential leadership for us to unite this government and create a real strategy, carrots and sticks, to get back on a - a better path with Russia. And we ought to be looking at doing that as soon as the Russian elections are over in March.

MARGARET BRENNAN: All right, Victoria, thank you very much. Mike, Fran, good to talk to you. We'll be right back with our political panel.