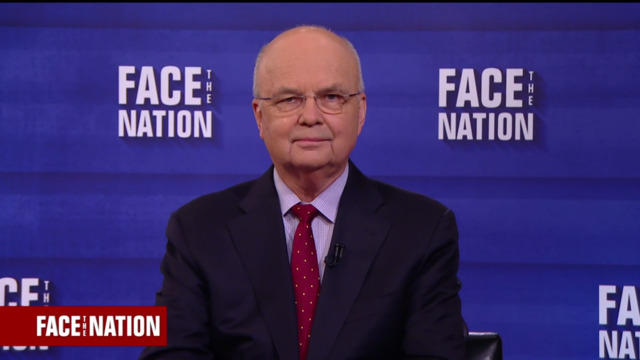 Former CIA Director Michael Hayden joined us to give his perspective on the intelligence community. He has written a new book titled "The Assault on Intelligence."

The following is a transcript of the interview with Hayden that aired Sunday, May 6, 2018, on "Face the Nation."

MARGARET BRENNAN: Our next guest Michael Hayden is a former director of both the CIA and the National Security Agency. He's also the author of a new book "The Assault on Intelligence: American national security in an age of lies". He's also a principal at the Chertoff Group here in Washington. What do you mean an age of lies?

MICHAEL HAYDEN: We have moved into what the Oxford Dictionary describes as a post truth world and I - Margaret, I look at the problem in kind of three layers. And frankly the first problem is us. It's the broader society. It's our social discourse or lack of social discourse. We're making decisions based not on facts and data but on emotion ,preference, grievance, loyalty, tribalism. We have a president who recognized that as a candidate exploited as a candidate, and frankly I think worsens it as a president by some of the things he says and does. And then finally we've got a foreign power, coming in recognizing and exploiting both 1 and 2 above, and it's all based on our moving away from basing our lives, our decisions our dialogue on a view of objective reality, rather than preference.

BRENNAN: Why do you think that this is now coming up? I mean as an intelligence professional you've been analyzing these kind of issues around the world in this book you talk about advice you've given to other professionals who are considering joining the Trump administration  and you're telling them don't do it. But don't you need more professionals at a time like this?

HAYDEN: You do, you do. And I reserve I kind of take that for only folks at the very highest level because I don't know that they're going to have much influence. I look at the experience of H.R. McMaster for example who tried as hard as he could to connect decision making to the normal processes of fact based governance and I think he left because he failed. The other folks. You know the ones I describe as below deck with an oar and they should just be rolling, be there, do your duty make this president as successful as you can. But here's the punchline you have got to preserve not just your integrity, obviously, but you've got to preserve your institution, in the face of the pressures that it's under at the present time.

BRENNAN: Let me ask you about some of those comments the president has made about the institutions of intelligence you've taken issue with his very public criticism of the intelligence community including his repeated reference to the 9/11 attacks, missed signals, their faulty weapons of mass destruction intelligence in Iraq. You were in key intelligence roles at that time. Isn't some of his skepticism warranted?

HAYDEN: Absolutely. And I would be the first to tell you, should have done better there. I was in the room when we voted on the weapons of mass destruction National Intelligence Estimate that - that, Margaret, that's of a pattern with regard to the president when it comes to decision making, explaining his policies or defending his policies. He doesn't come at you with data. He doesn't come at you with evidence. He comes at you with attempting to delegitimize those who would agree with him. So it's fake news. The "lying media" intelligence with quotes in it. Political hacks in terms of John Brennan and Jim Clapper. That's the essence of post truth-ism. You don't take the matter on based upon an argument as to what reality is, in fact reality doesn't matter very much. You just discredit those who disagree with you.

BRENNAN: And yet he is trying to appoint a career intelligence official Gina Haspel to run the CIA. You've given her a full throated endorsement there --

BRENNAN: But I want to ask you. She was chief of base CIA black site in Thailand where at least 12 tapes were made of some call torture, enhanced interrogation techniques. Those were destroyed in 2005. I think you were at the DNI at that point in time. Do you think those tapes should have been destroyed? Because this is a huge issue that could hold up her confirmation.

HAYDEN: Yeah, as a matter of policy. It was against guidance, legally, there were no legal prohibitions against it but you bring up Gina-Gina and that's a great question. I mean we can relitigate the past of CIA. We've done that before. But if you want to do that then it should be directors and attorney generals and members of Congress and president, and presidents why I want Gina in there now is based upon the conversation you and I just had. All right? With a president who does not always attach his decisions to the real world, to data, to evidence. Gina Haspel is the one woman I want in that room when everyone else will be going into North-South auto-bob and saying "you're right boss". Gina Haspel won't. She'll be dedicated --

BRENNAN: She's not a "yes person"?

HAYDEN: Absolutely not. Her - look her only existence as a professional has been within the agency. Her only goal is to live out the agency's mission which frankly is to tell the truth to the president even though most often that makes the president's life less comfortable than it would otherwise be.

BRENNAN: Very quickly will that repair his relationship with the Intelligence Committee?

HAYDEN: She is a wonderful choice. Now the question becomes can she succeed were perhaps H.R. did not, which was connecting that to the actual decision.

BRENNAN: General Hayden thank you for joining us.

BRENNAN: We'll be back in a moment.

GOP Rep. Mike Turner: "No reason" for Biden to have classified docs in home
Thanks for reading CBS NEWS.
Create your free account or log in
for more features.
View CBS News In
CBS News App Open
Chrome Safari Continue
Be the first to know
Get browser notifications for breaking news, live events, and exclusive reporting.