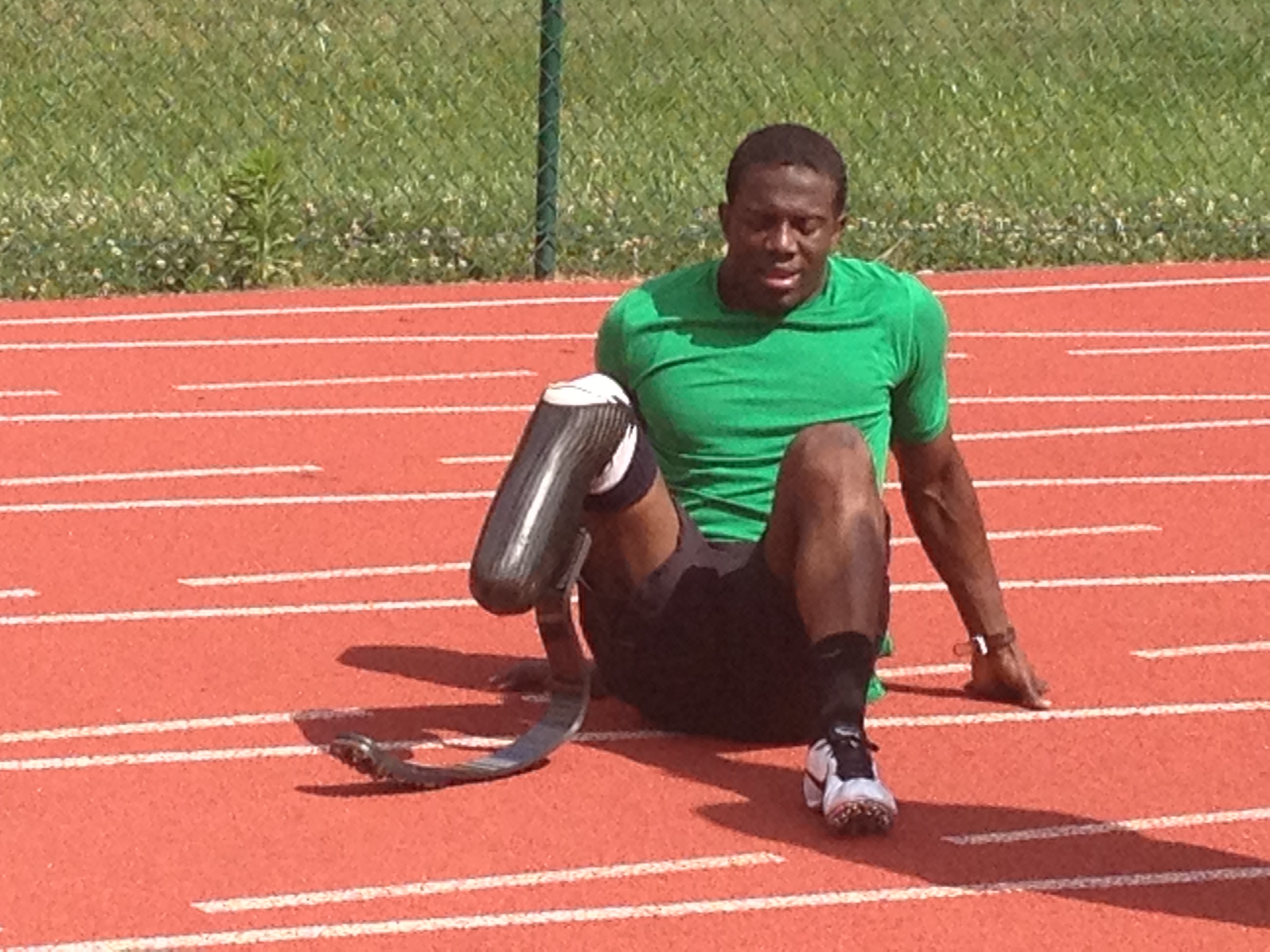 Bill Plante: Welcome to Face to Face, I'm Bill Plante and this morning we're at Gallaudet University in Washington, D.C. because there's a very special guest in town. His name is Jerome Singleton and I'm going to let you tell him who he is.

Bill Plante: The fastest amputee in the world?

Bill Plante: What do you mean?

Jerome Singleton: I won the world championships in the hundred meter last year in New Zealand,

Jerome Singleton: So I'm the fastest out there right now.

Jerome Singleton: What's next is we've got trials, at the end of this month, June 29 to July 1st, that gets on the team for the Paralympic Games in London.

Bill Plante: So you go to London, probably, you hope, at the end of August?

Bill Plante: Tell us a little about yourself and how you got to be a runner, and first of all, how about your disability.

Jerome Singleton: I was born with a birth defect that caused me to get my foot amputated at one-and-a-half. I was blessed to be in a family, in a community, that treated me just like the other kids, and just like my other siblings. So when I was growing up, I was playing sports. The only time I actually knew about disability sport was when I helped out with some of the wheel chair athletes, playing tee-ball. I actually helped them hit and then I helped them field the balls and do that. When I got into college, that's when I found about disability sport. I was a big time football player, one of the top 100 prospects coming out South Carolina, that's pretty good for a guy with one leg. But in college, studying math and physics at Morehouse college, I came across some running and walking legs and by doing that I came across Paralympics. I went to Paralympics.org and next thing I know, I'm a Paralympian. Out there, training for a couple of years.

Bill Plante: Wait a minute, it sounds like you are telling me, you kind of never knew you were any different from anybody else.

Jerome Singleton: No sir, I actually didn't realize I was disabled until I was about 18 or 19 when I could actually cut the lines at amusement parks.

Bill Plante: Wow. And when you figured that out, what did you decide to do?

Jerome Singleton: I got me a handicapped pass and you know... VIP parking, that's what I did. But it was a real good experience when I started finding out about Paralympics, I heard about the stories. I have a lot of mentors through Paralympics, people who excel in the classroom as well as on the field. I'm just blessed man at the end of the day.

Bill Plante: Did other players in the sports you played, like football, or track for that matter, treat you differently?

Jerome Singleton: They didn't treat me any differently, what I did was wear long socks all the time. A lot times when I ran track, I was actually hurdler in one of my walking legs, so I wore long tights. It was hot or cold, I still wore long tights. If I'm going to compete, I want you to try your best because If I win, I want it to mean something, just like if you beat me, I went 110%.

Bill Plante: So you're going to compete in the Paralympics, most likely. What events, what do you want to win, what's your goal?

Jerome Singleton: So the goal for the Paralympics is to try to reach my potential. I call it the pursuit of speed. I want to race in the 100-meter, the 200-meter and anchor the 4-by-100-meter relay.

Bill Plante: So there's a lot of attention being paid these days to members of the armed forces who have lost limbs in Iraq and Afghanistan. Do you ever get together with those folks and talk to them?

Jerome Singleton: Of course, Of course. One of my close friends is Kortney Clemons, he lost his leg in Iraq. Also Casey Tibbs, they are both Paralympic hopefuls. Casey went to the last Paralympics and won a gold medal on the relay with us, breaking the world record. Kortney Clemons, he's working toward going for the 100 and 200 for the Paralympics. It's talking to them, they really inspire me, because they were out there and gave the most they could for their country and they came back and they still want to be the best. You are in the best army or best military in the world and you come back and say I want to be the best athlete in the world too.

Bill Plante: So are you going to get involved in working with them ongoing?

Jerome Singleton: Yes sir, yes sir, I would love to. I'm part of the Paralympic Ambassador Program and we get to go to the VA sometimes and talk to injured veterans. It's just a blessing man, just to hear their stories and to share my story. Anyway I can help, am I'm going to do it.

Bill Plante: When you meet folks are they surprised to hear who you are who what you do?

Jeome Singleton: I guess so sometimes. People say that I'm an inspiration. Like the blessing is, in a short period of time you can see me go out there and run and say 'I want to change the way I look at life, I want to change my perception on life. If he can do it, I can do better.' But they have to realize, when I go out here every day and train, I'm training to go to the Paralympic Games, one of the biggest events in the world. When I see them out here training and they want to be healthy, I couldn't say that I would be out there getting healthy just for the sake of it, so I really respect that.

Bill Plante: What do people say, when they find out in addition to being one of the fastest, the fastest, ok, amputee in the world, you're also a guy who majored in physics and math and then went on to get an advanced degree?

Jerome Singleton: That's a whole different side of the spectrum. I think it's a great thing that I've been blessed to do. I went to school on a full ride scholarship for academics, not for athletics. Athletics came later in life and I've had a chance to really succeed in it. Like I said, I was a triple major in mathematics and applied physics at Morehouse college and then went to the University of Michigan and did industrial operations engineering and while being there, I did internships. I've interned at NASA's Glenn Research Center, I've interned at CERN in Geneva, Switzerland, and I've interned at Park City Mathematics Institute, the Institute of Advanced Studies through Princeton University. I've just been blessed man and at the end of the day, I'm just thankful for all the people who've played a role in my being successful. And you know I can actually talk on both sides, I love sports but I also love academics.

Bill Plante: Ok, let's wind this up with your message for people who look at the disabled, what's the message you want them to take away?

Jerome Singleton: Whenever you look at somebody look at their abilities, not their disabilities. When it comes to life, I've learned to live it in a way that can be viewed two ways. Either an example or a warning. So we can watch the news every night and look at warnings of what we shouldn't do, or we need to look at ourselves and try to become examples for that next generation.

Bill Plante: Jerome Singleton, thank you for being with us on Face to Face. I'm Bill Plante.