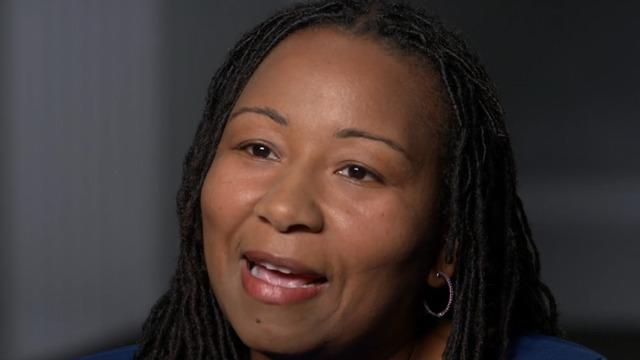 The following is a transcript of the interview with Charlottesville Mayor Nikuyah Walker that aired Sunday, August 12, 2018, on "Face the Nation."

Last year, Nikuyah Walker was just one Charlottesville resident infuriated by the local response to the protests on August 12. So she went to the next city council meeting.. and then she decided to run as an independent candidate for city council and ended up getting elected mayor.  We spoke with her in Charlottesville earlier.

MARGARET BRENNAN: Do you think this community a year later has healed? Has changed?

MARGARET BRENNAN: Not at all?

MAYOR WALKER:  No. Because the issues were not the rally, or just statues. The issue is this deep-seated racism that- that we have here. And that's the challenge. And that's a lot of work, and it takes commitment. And while people don't want - alt-right white men in khaki pants and polo shirts, you know, walking through town, and they want to make it clear that they don't identify there, they have been very comfortable with - racism and how it plagues the community.

MARGARET BRENNAN: So you think that the community still hasn't fixed some of the problems at the root of this kind of anger?

MAYOR WALKER: Oh a year isn't long enough. We're talking about issues that have been going on here for centuries

MARGARET BRENNAN: Do you think Charlottesville is representative of other cities in America?

MAYOR WALKER:  I think if you start talking about the issues that we're facing around the country that relate to race and class, you can put Charlottesville up there as a city to study, and you'll find all the major disparities exist, And we hear these stories all across the country. We heard them in, you know, Florida with Trayvon Martin, and Ferguson, and with Tamir Rice in Cleveland. Like we- we hear these stories about people who are just shocked at where we are in our communities in regards to racism. But even once the facts are presented, people really don't want to change their - actions to help truly heal that.

MARGARET BRENNAN: I think those images from last year shocked so many people--

MARGARET BRENNAN:--because they think of Charlottesville as Thomas Jefferson's hometown,--

MARGARET BRENNAN: --all of it. You ran on this platform, 'unmask--

MARGARET BRENNAN: One of the rallying points for the Unite the Right rally last year was around the Confederate statues, the monument to Robert E. Lee. He's still sitting right out there.

MARGARET BRENNAN: The fact that that statue is still standing there has to be very frustrating for you.

MAYOR WALKER:  What I often say to people is you have to have people who want to be on the right side of history. While, you know, the law is the way that it is now, we have a judge at our circuit court- he's creative and working around whatever legal measures, you know, are- are in place to figure out a way for us to take the statue down. It seems to be a lot of, you know, support and research from his direction into making sure that it can stay up.

MARGARET BRENNAN: Because of the way that the state functions, unless, my understanding is, it's designated or determined to be a symbol of white supremacy the war monument can't be taken down.

MARGARET BRENNAN: What does it represent to you?

MAYOR WALKER: The hate that it caused, the hate that it drew here, that people were able to mobilize behind a decision that the previous council had made about removing those statues and get that many people into this area to- make sure that we understood that they were going to do everything within their power not to let that happen. That means that absolutely it- it must come down. Right?

MARGARET BRENNAN: To you it's a clear answer to the question "Is it a sign of white supremacy?" You're saying yes?

MAYOR WALKER:  Yes. It's- it definitely is. That statue went up in the 20s. The war had ended long before then.

MARGARET BRENNAN: But why pretend that that part of history, I guess, is the argument didn't happen? Why not leave it and--

MAYOR WALKER: It's not about--

MARGARET BRENNAN: --and learn from it?

MAYOR WALKER: Yeah. No. It's not about pretending that it didn't happen. We look all over this nation and you have symbols of white supremacy up, right, all over the place that you can look and it says that white is superior right? It tells the story-people look around them and all they see is symbols portraits of white faces. So that story of just white dominance over all is something that we have struggled with as a country.

MARGARET BRENNAN: In the year that has passed, have you seen anything bridged? Have you seen- from the top down- in this country? Or in this community?

MAYOR WALKER: Yeah! There has been good. I mean we have a community here, who- not the all the people in the community, but we have a good segment of the population who has come together to fight, you know- the, you know, has taken on the call to make sure that justice and equity is a part of their everyday lives and have- and understand that they have to take that into every room they walk in.