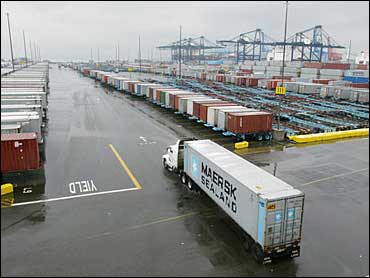 The United States deficit in the broadest measure of international trade soared to an all-time high of $665.9 billion in 2004, showing in stark terms the speed with which the country is becoming indebted to the rest of the world.

The Commerce Department reported Wednesday that the shortfall in the current account was 25.5 percent higher than the previous record, the $530.7 billion deficit set in 2003. The department also noted that the deficit was worsening as the year ended with the shortfall in the fourth quarter hitting a record $187.9 billion, up 13.3 percent from the third quarter deficit.

The Bush administration contends the soaring trade deficits reflect a U.S. economy that is growing faster than the rest of the world, pushing up imports and dampening demand for U.S. exports. But private economists are worried that the huge level of resources being transferred into the hands of foreigners will eventually result in lower U.S. living standards.

In other economic news, the Commerce Department said construction of new homes and apartments rose by 0.5 percent to a seasonally adjusted annual rate of 2.195 million units in February, the fastest pace in 21 years.

Construction of single-family homes hit an all-time high of 1.775 million units, up 0.3 percent from January, and multi-family construction was up 1.7 percent to 420,000 units.

Analysts believe the housing sector, which has set sales records for four straight years, will begin to cool this year under the impact of rising interest rates.

The current account trade deficit is closely watched by economists because it is the broadest measure of international trade, covering not only trade in goods but also trade in services and investment flows between nations. The deficit for 2004 was not only a record in dollar terms but also as a percentage of the total U.S. economy, climbing to 5.7 percent of the gross domestic product, up from 4.8 percent of GDP in 2003.

The deficit represents the amount in resources that the United States is transferring into the hands of foreigners in exchange for foreign oil, cars and other products that Americans are purchasing.

While foreigners have been more than willing to exchange their products for U.S. dollars, there is a worry that at some point they will become less willing to do so and will seek to exchange dollars for other foreign currencies.

The dollar's value against other currencies has been declining for three years but so far that decline has been orderly.

However, some private analysts worry that one day the dollar might begin falling in value more sharply if foreigners suddenly decide to diversify into other currencies and begin cashing in their holdings of U.S. stocks, bonds and Treasury securities. Such a development could send stock prices in this country plunging and interest rates surging.

Investor Warren Buffett warned in this year's letter to shareholders of Berkshire Hathaway Inc. that the United States could become a "sharecropper's society" by the continued transfer of U.S. assets into foreign hands. He estimated the country's debt to foreigners could surge to $11 trillion by 2015.

However, Federal Reserve Chairman Alan Greenspan has said in recent speeches that he believes the country's current account deficit will be resolved without sparking financial market turmoil as the weaker dollar makes U.S. goods more competitive in foreign countries while making imports more expensive and thus less appealing to Americans.

But Buffett warned in his letter to shareholders that the growing indebtedness would require annual payments to foreigners to service the debt of around $550 billion by 2015, a transfer of resources that would mean less investment and lower living standards in the United States.

For 2004, the current account deficit reflected a shortfall of $665.5 billion in goods, up from a goods deficit of $547.6 billion in 2003. One-fourth of the deterioration was blamed on higher foreign oil imports.