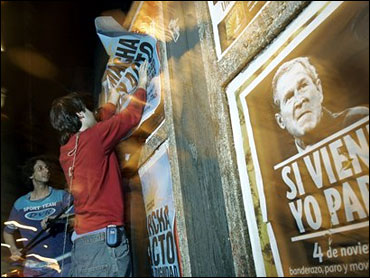 A showdown over free trade loomed as leaders from across the Americas headed to Argentina on Thursday in another attempt to end Latin America's chronic poverty, with Washington promoting liberalized trade and opponents fearful that it will allow corporations to dominate the poor.

Thousands of protesters were arriving at this seaside resort, seizing the chance to criticize President Bush over his push for unfettered free trade and a new trade zone stretching from Alaska to Argentina.

Mr. Bush was to arrive late Thursday in Mar del Plata for the fourth Summit of the Americas, a two-day gathering with 31 fellow leaders from Latin America and the Caribbean.

The focus of the summit Friday and Saturday is how to create jobs for a region where unemployment and underemployment has been a prime concern for decades.

Mr. Bush also wants to re-ignite talks stalled for years over the creation of a Free Trade Area of the Americas that would overtake the European Union as the world's largest trade zone.

On Wednesday, however, government officials at the summit site were still bickering over whether the event's final declaration would include key language on when high-level FTAA negotiations might resume.

Victor Hugo Varsky, an Argentine negotiator, said negotiators were "advancing very slowly" as they decide what priority the FTAA should have in that statement.

"Some countries don't want any mention," he said. "Others want to progress toward a trade accord."

Demonstrators at the People's Summit — and Venezuelan President Hugo Chavez and top Cuban government officials — say Mr. Bush is bent on opening up Latin America even more to corporations that will end up enslaving already poor workers.

"Latin America remains the region of most inequalities in the world," Cuban Foreign Minister Felipe Perez Roque told The Associated Press in Havana as a Cuban delegation gathered at a "People's Summit" to counter the Americas Summit. "The FTAA is just more of the same neo-liberal policies."

Communist-run Cuba, an adversary of the United States for more than four decades, is the only country in the hemisphere that was not invited to the summit hosted by the regional Organization of American States.

In response to the criticism, a top Bush administration official countered that the president has made solid proposals recently to address Latin American concerns over U.S. farm subsidies considered lavish by developing countries, and that free trade is the best way to lift people around the world out of poverty.

"The big opportunity to enhance prosperity in the region, of course, is the trade agenda," National Security Adviser Stephen Hadley said Wednesday in Washington. "Because, as you know, through free trade and private investment the leverage you get in terms of economic growth and enhancing prosperity really dwarfs the impact of specific aid programs."

Chavez — a key Castro ally — planned to visit the People's Summit but was not expected to accept an invitation to take part in a protest against Mr. Bush on Friday in Mar del Plata.

Before flying to Argentina, he said Venezuela would object to any attempt by the U.S. to revive its proposal for a hemisphere-wide free trade zone.

Chavez, who often spars with the United States, claimed the American delegation is trying to "to revive the FTAA."

"They aren't going to revive it even if they produce a 100,000-page document," he told the Caracas-based television channel Telesur.

U.S. Commerce Secretary Carlos Gutierrez on Wednesday lobbied in favor of FTAA, telling business leaders in Buenos Aires that it's the best way to create wealth and improve living standards in Latin America.

Previous FTAA deadlines have not been successful. A January 2005 deadline for wrapping up the talks has already come and gone.

All 34 nations except for Panama and Honduras were to be represented by heads of state at the summit.

Other differences over the summit's declaration have also emerged. Venezuela wanted the declaration to state that 37 million people lived in poverty in the United States — a clause Washington rejected.