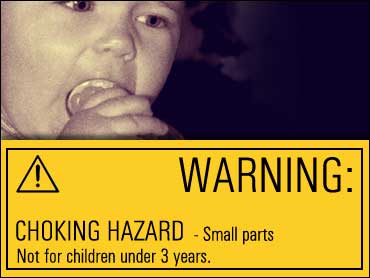 A consumer research group called Tuesday for warning labels on toys with magnets after more than 4 million Mattel play sets were recalled over injuries to several children who swallowed magnets that fell off.

The commission received 170 reports of the small magnets falling from Polly Pocket dolls and accessories. Three children swallowed more than one magnet and suffered intestinal perforation that required surgery. If more than one magnet is swallowed, they can attach to each other and cause intestinal perforation, infection or blockage, which can be fatal.

"Swallowing a magnet is not like swallowing a penny," said Alison Cassady, research director of the U.S. Public Interest Research Group in a statement that accompanied its annual toy safety survey. "Powerful magnets can wreak havoc inside the body."

U.S. PIRG said the commission should require labels on all magnetic toys warning parents to seek immediate medical help if their children swallow a magnet.

The Polly Pocket recall does not include sets currently on store shelves. Mattel redesigned those sets to make them safer, said CPSC spokesman Scott Wolfson.

Wolfson said the government is "actively pursuing new voluntary standards" from toy makers. "That work is being pursued not at the mandatory level but the voluntary level right now," he said.

Sara Rosales, vice president of communications at Mattel, said the company is working with others in the toy industry, consumer advocates and the government "to make appropriate revisions to the U.S. toy standard to prevent such issues in the future," Rosales said.

The Polly Pocket play sets contain plastic dolls and accessories featuring small magnets measuring 1/8 inch in diameter. The magnets are embedded in the hands and feet of the dolls, plastic clothing, hair pieces and other accessories that attach to the dolls.

The recall applies to about 2.4 million sets that were manufactured before April 1, 2005 and sold at department stores and toy stores in the United States from May 2003 through September 2006. They cost between $15 and $30. It also affects another 2 million Polly Pocket play sets were sold worldwide.

Last March, another toy company, Mega Brands Inc., recalled 3.8 million Magnetix magnetic building sets after one child died and four others were seriously injured after swallowing tiny magnets in them.

In 2005, there were 20 toy-related deaths and 152,400 toy-related injuries involving children under age 15. The majority of injuries were sustained from riding toys.

The commission said consumers should take the toys away from children and contact Mattel to arrange for the return of the toy and to receive a voucher for a replacement toy. For more information about the recall, contact Mattel at 888-597-6597 or visit http://www.service.mattel.com or http://www.cpsc.gov.