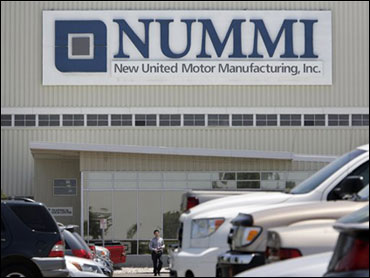 Toyota is shutting the California factory it ran with General Motors for 25 years - the first time the Japanese automaker is closing a major auto assembly plant ever.

The decision from Toyota Motor Corp., announced Friday, drew fire from U.S. unions, even as company officials and analysts defended it as unavoidable for money-losing Toyota, following General Motors Corp.'s decision in May to withdraw from the 50-50 joint venture.

"Shock, sadness, hurt, you know all the things wrapped up into one," auto worker Ron Lopez told Tracy.

Under the decision, Toyota will stop production at its Fremont, Calif.-based New United Motor Manufacturing Inc., or NUMMI, in March 2010, and will move production to its other plants in the U.S., Canada and Japan.

Production of the Corolla subcompact will be moved to its plant in Cambridge, Ontario, as well as Japan, and Tacoma pickups will be produced at its plant in San Antonio, Texas, it said in a statement.

But hopes had been great in California that the historic joint venture launched in 1984 between two major American and Japanese automakers could stay open. The plant, which employs about 4,600 workers, will be closed unless another company steps in to keep it going.

"It just would not be economically viable to continue the production contract with NUMMI. This is most unfortunate, and we deeply regret having to take this action," he said.

Niimi said details on what will happen to the factory, including its workers, still need to decided in the months ahead. Toyota may hire any interested NUMMI workers at its other North American plants, but they won't be given preferential hiring over other applicants, he said.

He said Toyota carefully considered support offers from the California state government, but they weren't enough to make it a sound business decision without GM. Toyota hopes to move Corolla production back to North America from Japan "as soon as possible," Niimi added.

California Gov. Arnold Schwarzenegger promised to work with the U.S. and Japanese governments, GM and Toyota to support those who lose their jobs and to change the site toward other uses.

"Today is a sad day in the history of Fremont as California joins the ranks of states adversely affected by the bankruptcy of General Motors and the worldwide collapse in demand for automobiles," Schwarzenegger said in a statement.

The California Labor Federation, which groups the state's unions, criticized Toyota's decision as aggravating the slowdown and hurting workers in the state, and urged the company to reconsider.

"It's appalling that the company plans to abandon its workers, the community and commitment to the environment now," said Executive Secretary-Treasurer Art Pulaski.

Ron Gettelfinger, president of United Auto Workers, also criticized the decision. He said Toyota had benefited from the U.S. government "Cash for Clunkers" program, which offered consumers rebates to trade a gas-guzzler for a new car. Toyota models like the Corolla have been snatched up by American buyers.

"They deserve better than to be abandoned by this company, which has profited so richly from their labor, their productivity and their commitment to quality," Gettelfinger said of the workers.

Hit hard by the global auto slump, Toyota has been struggling to achieve a turnaround. It racked up its worst loss ever of 436.9 billion yen ($4.6 billion) for the fiscal year ended March 31, and is expecting more red ink for the fiscal year through March 2010.

Toyota is more dependent on the North American market than are other major Japanese automakers, and has suffered the worst fallout from the U.S. recession that sent car sales tumbling since last year.

Tsuyoshi Mochimaru, auto anlayst with Barclays Capital Japan in Tokyo, said Toyota's decision was reasonable after GM pulled out because it would have been difficult to go at it alone.

Toyota said it remains committed to the North American market and will make production changes to ensure a steady vehicle supply for its dealers and customers.

GM emerged from bankruptcy and its NUMMI stake has become a part of Motors Liquidation Co. - also known as Old GM - where it will be liquidated under court supervision.

The end of NUMMI marks a closure for a landmark cross-Pacific tie-up between two industry greats that had competed - and cooperated - over the decades.

Toyota executives say the Japanese company learned a lot from GM, especially in Toyota's early years as it was trying to become a global automaker. But the exchange was mutual, and one of the main purposes of NUMMI was to allow GM workers to learn from Toyota's production methods.

"NUMMI has been a groundbreaking model of Japan-U.S. industry collaboration and we are proud of its achievements," said Niimi. "Toyota has learned much about automobile production in the U.S. through NUMMI, and these have been an invaluable 25 years."

Toyota, founded in 1937, became the world's biggest automaker in 2008, replacing GM, which had the honors for 77 years. GM sold nearly 8.4 million cars and trucks around the world in 2008, falling short of Toyota's nearly 9 million.

But Toyota has been sharply scaling back production globally lately because of its financial troubles. Toyota has said recently that it is expecting to sell 6.6 million vehicles in the fiscal year through March 2010.

Kunihiko "Kent" Ogura, President and CEO of NUMMI, promised to try to work for a smooth transition for the workers at the plant.

"NUMMI has enjoyed a very positive and mutually beneficial relationship with our suppliers, customers and community for the past 25 years," he said. "We can all take great pride in the substantial achievements of this pioneering venture."