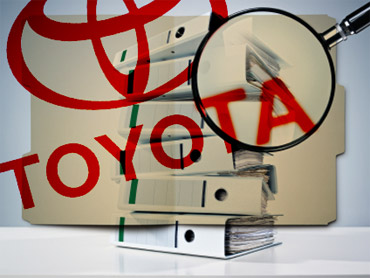 The fine is the largest-ever penalty paid by an automaker to the U.S. government. Transportation Secretary Ray LaHood said that by failing to report safety problems, Toyota put consumers at risk.

"We now have proof that Toyota failed to live up to its legal obligations," LaHood said in a statement. "Worse yet, they knowingly hid a dangerous defect for months from U.S. officials and did not take action to protect millions of drivers and their families."

The penalty is connected to a January recall of 2.3 million vehicles with sticking accelerator pedals. The government says Toyota knew about the problem in late September and failed to report the defect within five business days, as required by law.

Toyota announced it would recall 2.3 million vehicles in January to address sticking pedals on popular vehicles such as the Camry and Corolla. The Japanese automaker has recalled more than 8 million vehicles worldwide because of acceleration problems in multiple models and braking issues in the Prius hybrid.

Transportation officlas also said April 19 that Toyota would recall 6,000 Lexus GX 460s to address a potential problem with the SUV rolling over. That vehicle was dubbed unsafe by Consumer Reports, leading Toyota to halt sales and examine all its SUV models.

Concerns about sticking gas pedals and complaints from Toyota owners in the U.S. were rising at the end of 2009, according to chronologies of the investigation Toyota provided to the government.

The National Highway Traffic Safety Administration said documents provided by Toyota showed the automaker had known about the sticky pedal defect at least since Sept. 29, 2009, when it issued repair procedures to distributors in 31 European countries to address complaints of sticking pedals, sudden increases in engine RPM and sudden vehicle acceleration.

The documents also showed that Toyota knew that owners in the United States had experienced the same problems.

The company has been named in 138 potential class-action lawsuits over falling vehicle values and about 100 personal injury and wrongful death cases in federal courts. Federal prosecutors and the Securities and Exchange Commission are conducting investigations related to the recalls.

Transportation officials have not ruled out additional fines. The department is reviewing whether Toyota delayed for six weeks the late January recall of the 2009-2010 Venza in the United States to address floor mats that could entrap the accelerator pedal after making a similar recall in Canada.

Toyota recalled the Venza in Canada in December and reported to the U.S. government on Dec. 16 that the floor mats could move forward while the vehicle is in use and "may interfere with the accelerator pedal."

Toyota told U.S. authorities at the time that the floor mats in question were not imported into the U.S. but the Venza was added to the floor mat recall in late January.

The government has linked 52 deaths to crashes allegedly caused by accelerator problems in Toyotas. The recalls have led to congressional hearings, a criminal investigation by federal prosecutors, dozens of lawsuits and an intense review by the Transportation Department.

Toyota has attributed the problem to sticking gas pedals and accelerators that can become jammed in floor mats, and has cited no evidence of an electrical problem. Toyota dealers have fixed 1.7 million vehicles under recall so far.

Consumer groups have said electronics could be the culprit, and dozens of Toyota owners who had their cars fixed in the recall have complained of more problems with their vehicles surging forward unexpectedly.