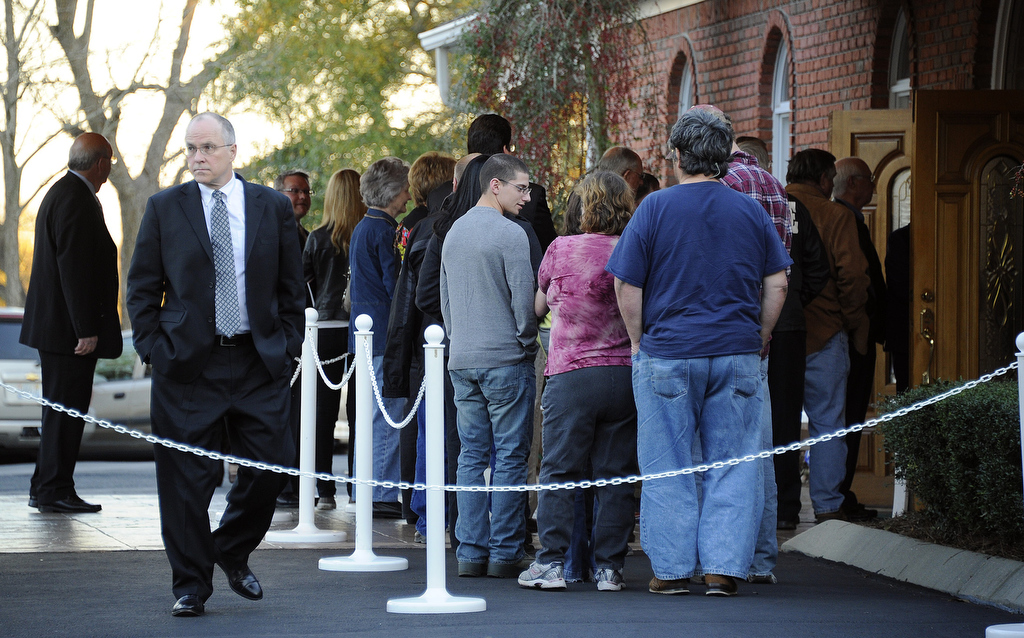 MIDLAND CITY, Ala. As the police standoff with an Alabama man accused of holding a 5-year-old boy hostage continued Saturday, a nearby community prepared to bury the beloved bus driver who was shot to death trying to protect children on his bus when the episode began days earlier.

Charles Albert Poland Jr., 66, who was known around town as Chuck, was described by folks in his hometown of Newton as a humble hero. Hundreds of people attended a viewing service for Poland on Saturday evening. His funeral was set for Sunday afternoon.

"I believe that if he had to do it all over again tomorrow, he would," said Poland's sister-in-law, Lavern Skipper, earlier Saturday. "He would do it for those children."

Authorities said Jim Lee Dykes boarded a stopped school bus filled with 21 children Tuesday afternoon and demanded two boys between 6 and 8 years old. When Poland tried to block his way, the gunman shot him several times and took one 5-year-old boy — who police say remains in an underground bunker with Dykes.

Dale County Sheriff Wally Olson said in a briefing with reporters Saturday that Dykes has told them he has blankets and an electric heater in the bunker on his property. Authorities have set up a command post at a church and have been communicating with Dykes through a ventilation pipe to the underground bunker.

"I want to thank him for taking care of our boy," Olson said. "That's very important."

The shooting and abduction took place in Midland City, a small town near Dothan, Ala., in the state's southeastern corner.

Newton is about three miles away, a small hamlet with fewer than 2,000 residents. It sits amid cotton farms and rolling hills sprinkled with red earth; most of the residents commute to Dothan or to a nearby Army post.

William Lisenby, a school bus driver who also taught Sunday School with Poland, was flanked by other area bus drivers as he arrived at Saturday night's viewing service for his friend at a local funeral home.

Lisenby spoke in Biblical terms when referring to Poland.

"If you'll notice the similarities there, of what Chuck did was the same thing that Jesus Christ did. These children, even though they were not Chuck's, he laid down his life to defend those children. My hat's off to him for that."

"He was a bus driver just like we are," Lisenby said. "But for the grace of God that could have been us."

Others spoke of the loss of a good man, and their hope that the little boy being held captive is alive and well and will be released soon.

"The community is real concerned," said Fred McNab, mayor of Pinckard, Ala. "You can tell by the food that's been carried over there to the church. It's just devastating. We want it to come to a resolution. We want to save that little child."

"He's probably the nicest guy you'll ever meet," said Lonnie Daniels, the 69-year-old owner of the NAPA Auto Parts store, one of three establishments in town that was open Saturday.

Daniels last saw his friend Tuesday morning, when Poland agreed to buy a car from him. The two men shook hands and closed the deal "like gentlemen," Daniels said. Poland was to return after working his bus route to pay for the car.

Daniels said Poland had been married to his wife for 43 years. Poland was from Idaho, but his wife was from Newton. The couple lived there for decades in a small mobile home, and Poland enjoyed gardening and clearing brush from his property.

"I knew that he was always there if I needed," said Daniels, adding that Poland was an excellent mechanic with an array of tools that he lent to people in town.

Neighbors and friends said Poland did various acts of kindness for people in town, from fixing someone's tractor to tilling the garden of a neighbor who had a heart attack.

"You don't owe me anything," Poland once told a recipient of his good deed. "You're my neighbor."

Skipper said Poland and his wife would often sit on their porch, drinking coffee, praying and reading the Bible.

"They loved to be together," Skipper said.

On Saturday morning, Poland's wife wasn't home. A rack of worn trucker's caps sat on hooks on the porch, and two freshly baked pies were laid atop a cooler.

The victim's son, Aaron Poland, told NBC News that he wasn't surprised by his father's act to protect the kids on the bus.

"He considered them his children," Poland said, choking back tears. "And I know that's the reason why my dad took those shots, for his children, just like he would do for me and my sister."

As Newton grieves, residents are praying for the safe return of the boy being held hostage — and wondering about the man behind the abduction.

"We'd all like to get to him and say, `What's wrong with you?' " said Gerald Harden, owner of a gun shop in Newton.

Harden said he checked his records to see whether Dykes had bought a firearm there, but records showed he hadn't.

In Midland City, police were mostly staying mum about their talks with Dykes, — a Vietnam-era veteran known as Jimmy to his neighbors. Some have described him as a menacing figure with anti-government views.

One of Dykes' next-door neighbors said the suspect spent two or three months constructing the bunker, digging several feet into the ground and then building a structure of lumber and plywood, which he covered with sand and dirt.

Neighbor Michael Creel said Dykes put the plastic pipe underground from the bunker to the end of his driveway so he could hear if anyone drove up to his gate. When Dykes finished the shelter a year or so ago, he invited Creel to see it — and he did.

"He was bragging about it. He said, `Come check it out," Creel said.

He said he believes Dykes' goal is to publicize his political beliefs.

"I believe he wants to rant and rave about politics and government," Creel said. "He's very concerned about his property."

Police have used the pipe for communication and to deliver the boy medication for his emotional disorders. State Rep. Steve Clouse, who visited the boy's mother, said the boy has Asperger's syndrome — a mild form of autism — and attention deficit hyperactivity disorder, or ADHD.

But police have not revealed how often they are in touch or what the conversations have been about.

Local officials who have spoken to police or the boy's family have described a small room with food, electricity and a TV.

Sheriff Olson would not say Saturday whether Dykes has made any demands. Olson added that he is limited in the details he can release.

FBI spokesman Jason Pack said Saturday that officials were working to establish a command center near the bunker.

Dykes had been scheduled to appear in court Wednesday to answer charges he shot at his neighbors in a dispute last month over a speed bump.