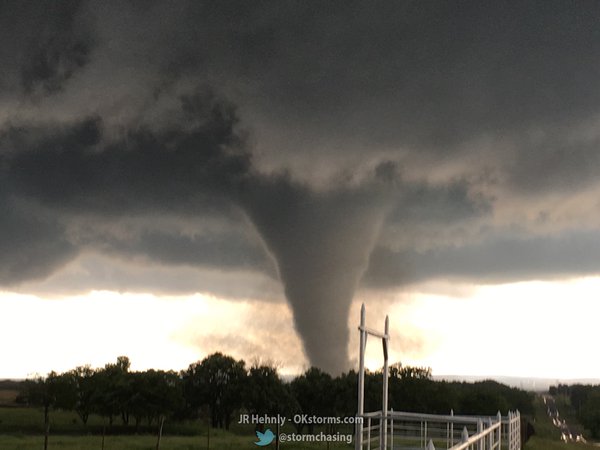 GARVIN COUNTY, Oklahoma -- Tornadoes swept across portions of the Plains on Monday, killing two people in Oklahoma including an elderly man who was inside a home that was torn apart by one of the violent storms.

An emergency management director said a man believed to be in his upper 70s died when a tornado hit a home near Wynnewood, south of Oklahoma City. Gavin County Sheriff Larry Rhodes identified the victim as 76-year-old Chester Barnes.

The storm was considered so violent that forecasters declared a "tornado emergency" for communities in the twister's path.

"You are in a life-threatening situation," forecasters declared while warning the communities of Roff, population 725, and Hickory, population 71, which were ultimately spared major damage. "Flying debris will be deadly to those caught without shelter."

The first twister, moving in an east northeast direction, formed in a rural area just to the east of Elmore City, CBS affiliate KWTV reported. KWTV Storm Trackers spotted the tornado forming multiple vortexes as it made its way across the county.

Jessica Randolph, a cashier at the Love's Travel Stop in Paul's Valley, Oklahoma, said the tornado came so close that managers ordered employees and customers to take shelter.

"They put us in the showers," Randolph said. "I drove in when all of that was going on. All we had was pea-sized hail."

Despite the danger, Randolph said she has seen severe weather before and wasn't frightened by the experience.

Dana Lance was driving through the Pontotoc County community of Roff on her way home from work Monday when the skies grew ominous, and she heard tornado sirens and forecasters on the radio urging people in the area to take cover.

"I parked and went into the school, which has a safe room," Lance said. "There were kids and elderly people, dogs and cats, babies. It was like the whole town was there."

One person sustained minor injuries in Murray County, where the tornado moved slowly through a rural area on its path that would take it south of Roff, said Gary Ligon, Murray County's emergency management director.

Ligon said the injured person was taken to a hospital but the nature of the injury was not immediately known.

KWTV Storm Tracker Tom Pastrano was on the ground in southern Oklahoma where one home was completely leveled.

A second, even larger tornado, then formed to the northwest of Sulphur, Oklahoma.

Payne estimated this tornado to be an EF-4 or possibly larger, moving in the direction of Hickory, Oklahoma, and Roff, Oklahoma.

Monday's series of violent thunderstorms dropped tornadoes near Oklahoma City and in the rolling hills south of the city, destroying some homes and barns. The Oklahoma Highway Patrol closed Interstate 35 near Wynnewood for 15 minutes Monday so the storm could pass, temporarily shutting down the primary route between Oklahoma City and Dallas.

Garvin County Emergency Management Director Bud Ramming said early Monday evening that the fatality was the only known injury reported to his office.

About 41 million people from Houston to Sioux City, Iowa, were at risk for some type of stormy weather.

The National Weather Service says a tornado has touched down in central Iowa.

Officials at the National Weather Service in Des Moines confirmed a small, rope tornado touched down west of Guthrie Center a little after 8 p.m. Monday. The twister has not hit any populated areas and there are no reports of damage or injuries.

Guthrie Center is about 60 miles west of Des Moines.

Officials say a tornado that swept through a rural southeast Nebraska town destroyed a home, while the homeowner hung onto a tree outside.

The National Weather Service in Omaha reported at least one tornado touched down Monday afternoon near Nehawka, about 30 miles south of Omaha.

Sandy Weyers, Cass County Emergency Management director, says the homeowner didn't make it inside by the time a tornado arrived in the area so he grabbed hold of a tree and "rode it out."

The man only suffered a few cuts and scrapes, but Weyers said the home was a total loss. No one was in the home when the roof and outer walls collapsed.

Cindy Fay, with the National Weather Service in Hastings, says there were three confirmed tornadoes that touched down Monday afternoon near the cities of Fairfield and Clay Center.

Sandra Nejezchleb, the ambulance captain at the Fairfield Fire Department, says no students were injured at Sandy Creek High School in rural Fairfield, but windows of school vans and other vehicles were busted out in the parking lot, there was damage to a school porch awning and an irrigation pivot overturned about a mile south.