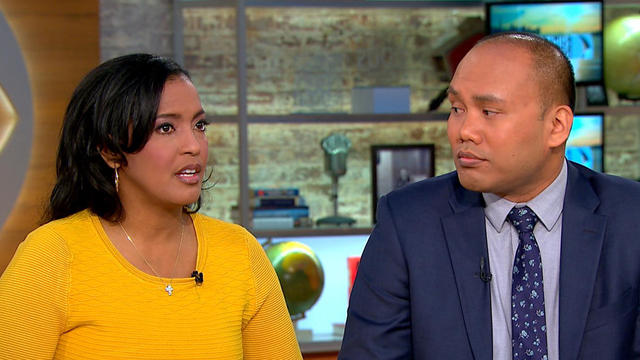 Wednesday's national school walkout is calling fresh attention to the issue of gun violence and how to keep America's schools safe. Two of the nation's top educators, 2016 National Teacher of the Year Jahana Hayes and 2016 Oklahoma Teacher of the Year Shawn Sheehan, joined "CBS This Morning" to discuss the debate over arming teachers and the financial struggles many teachers face amid low pay and declining wages.

Hayes teaches social studies at John F. Kennedy High School in Waterbury, Connecticut, and Sheehan now teaches algebra at Lewisville High School Harmon Campus in Texas. Both teachers dealt with threats at their own schools in the aftermath of the Parkland high school shooting.

"I think of it regularly, I mean daily. I'm always running through the scenario, what if a shooter enters from this door, then my quickest exit is this way. If I'm in the classroom then I'm thinking about where are the nearest desks I can pile in front of this door to protect my students," Sheehan said. "I would say over the last two years is when it became more of a routine for me."

Hayes, on the other hand, says it's not something she thinks of all that often. Her focus remains on creating a place for learning.

In the wake of the mass shooting at Marjory Stoneman Douglas High School in Florida, President Trump suggested arming teachers as a way to protect students from active shooters. Sheehan called that a "terrible" idea.

"And I'm coming from this from a point where just two months ago I was at a gun range in Lewisville, Texas, firing an AR-15. I'm comfortable with guns, I'm comfortable with weapons, but they have no place in the classroom. As teachers, we have an ever-growing list of duties and we should not security guard to that list of job responsibilities," Sheehan said.

Hayes, who is also comfortable around guns, agreed.

"My husband is a detective. We have guns in our home, but our roles are very different. We go to work to do very different things, you know. I don't want to carry a gun. I want to stand in front of kids, I want to make sure we create a space for them to learn. All of these other things that are added on as part of the conversation really confuse what we're really talking about and blurs the line between the roles," Hayes said.

A recent nine-day teachers' strike in West Virginia has reignited the conversation around low teacher salaries and the financial challenges for those who want to stay in the profession.

Added Hayes, "This is still a profession. I worked really hard to be a teacher. I have a graduate degree, a post-graduate degree – really invested. This is a career. So, the compensation needs to match that."

Florida teachers can now carry guns inside the classroom
Thanks for reading CBS NEWS.
Create your free account or log in
for more features.
View CBS News In
CBS News App Open
Chrome Safari Continue
Be the first to know
Get browser notifications for breaking news, live events, and exclusive reporting.