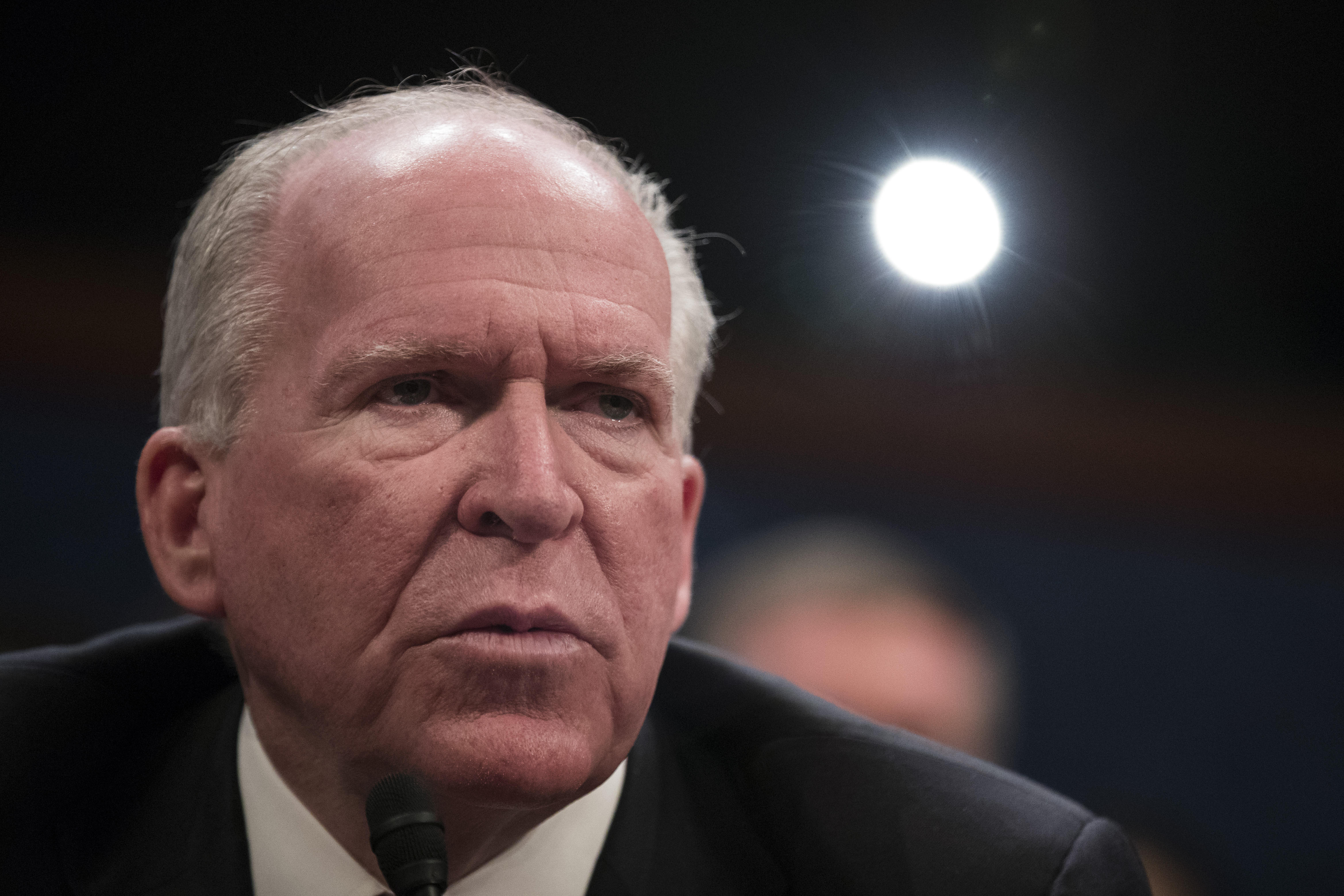 "We feel compelled to respond in the wake of the ill-considered and unprecedented remarks and actions by the White House," the senior officials wrote. "We know John to be an enormously talented, capable and patriotic individual who devoted his entire adult life to the service of this nation."

Morell told "CBS This Morning" he helped organized the letter. He said it was "difficult to get the language just right, because there were those of us who believed that what John has done since he left government and how he has chosen to use his voice is appropriate, and actually required in a democracy, and there are those of us who believe that he is acting inconsistent with the stature of a former director, so it was tough to get that right."

But, Morrell said, everyone who signed agreed that Brennan has served his country well and saved lives, and the use of a national security tool for "political purposes" is "inappropriate" and "unprecedented."

The signatories include past CIA directors of every administration going back to President Reagan's.

Their letter is the latest swell in a chorus of disapproval from former senior national security officials, lawmakers and free speech advocates generated by the White House's decision, announced Wednesday by White House press secretary Sarah Huckabee Sanders, to revoke Brennan's clearance and thereby his access to classified information.

During an afternoon press briefing, Sanders read a statement from President Trump that cited "a history that calls into question [Brennan's] objectivity and credibility" and unspecified risks related to his "erratic conduct and behavior."

"That conduct and behavior has tested and far exceeded the limits of any professional courtesy that may have been due to him," the president's statement said.

Former intelligence and law enforcement officials commonly retain their security clearances in order to ensure institutional continuity and in the event their expertise proves useful to their successors. It is unclear how often, if ever, Brennan's views were solicited by agencies under the Trump administration, but the president's move is thought by legal experts to be the first of its kind taken outside of typical protocols for clearance revocation.

Both the CIA and Office of the Director of National Intelligence (ODNI) referred inquiries about the matter, including whether the agencies' respective directors had been consulted, to the White House. A National Security Council spokesman declined to comment.

Late Wednesday, the ODNI issued a one-sentence statement. "The President has the ultimate authority to decide who holds a security clearance," it said.

In their letter, the former directors called allegations of wrongdoing on Brennan's part "baseless" and criticized the White House for what they said was a transparently political move.

"[W]e all agree that the president's action," they wrote, "has nothing to do with who should and should not hold security clearances – and everything to do with an attempt to stifle free speech."

"You don't have to agree with what John Brennan says (and … not all of us do) to agree with his right to say it, subject to his obligation to protect classified information," the letter said.

Since leaving his post at CIA, which he ran during the Obama administration, Brennan has emerged as one of Mr. Trump's most consistent and vociferous critics, tweeting occasionally overwrought missives that have often taken aim at the President's character, in addition to his policies. On Tuesday, Brennan waded into the latest personnel scandal that for much of the week had been engulfing the White House, lashing out at the President for calling a recently fired aide a "crazed, crying lowlife" and a "dog."

"It's astounding how often you fail to live up to minimum standards of decency, civility, & probity," Brennan tweeted. "Seems like you will never understand what it means to be president, nor what it takes to be a good, decent, & honest person. So disheartening, so dangerous for our Nation."

Though embraced by many of the president's opponents, Brennan's candor has been met with disapproval from a significant swath of the intelligence community, whose members typically pride themselves on doing their jobs dispassionately and apolitically. Friday's letter was subtly caveated to that effect.

"John has chosen to speak out sharply regarding what he sees as threats to our national security.  Some of the undersigned have done so as well," the letter said. "Others among us have elected to take a different course and be more circumspect in our public pronouncements."

In the days following Wednesday's announcement, a number of other prominent and generally measured former senior national security officials – in statements, op-eds and television appearances – fiercely defended, if not Brennan's views, his ability to express them.

In a "Washington Post" op-ed published Thursday, retired Navy Admiral William McRaven, who oversaw the Navy SEAL raid that killed Osama bin Laden, called Brennan "a man of unparalleled integrity, whose honesty and character have never been in question, except by those who don't know him."

"Therefore," McRaven wrote, "I would consider it an honor if you would revoke my security clearance as well, so I can add my name to the list of men and women who have spoken up against your presidency."

Former homeland security and counterterrorism adviser to President George W. Bush Fran Townsend, who is also a CBS News senior national security analyst, said clearances did not generally merit revocation for political reasons. "The notion that you're going pull somebody's clearance because you don't like what they did in government service or you don't like what they say is deeply disturbing and very offensive, frankly," she said.

The CIA declined to comment on Thursday whether it had taken any action to revoke Brennan's clearance. "CIA does not comment on individual security clearances," a spokesman for the agency said.

Sanders had first announced that the White House was "exploring the mechanisms" for revoking security clearances for Brennan and several other officials late last month, during a week when the White House was otherwise contending with fallout from the President's meeting with Russian president Vladimir Putin. At the time, Sanders said the administration's reason for considering the move was that the officials had "politicized, and in some cases, monetized their public service and security clearances."

"I don't trust many of those people on that list," Mr. Trump said in an interview Wednesday with the Wall Street Journal. "I think that they're very duplicitous. I think they're not good people."

In a move reminiscent of his decision to fire former FBI director Comey last year, Mr. Trump also overtly linked the officials to special counsel Robert Mueller's ongoing investigation into his campaign's contacts with Russia – and his personal distaste for it. "I call it the rigged witch hunt, [it] is a sham," he said "And these people led it!"

"So I think it's something that had to be done," Mr. Trump said.

Brennan's own response to news of the president's decision was swift and acerbic. Just over two hours after Sanders first made the announcement, Brennan issued a hard-edged tweet calling the action "a broader effort by Mr. Trump to suppress freedom of speech & punish critics." He appeared on a cable news program shortly thereafter and overnight published a forceful op-ed in the New York Times. In it, he called Mr. Trump's denial of collusion with Russia "hogwash" and Mueller's investigation into the matter "critically important."

"Mr. Trump clearly has become more desperate to protect himself and those close to him, which is why he made the politically motivated decision to revoke my security clearance," Brennan wrote, "in an attempt to scare into silence others who might dare to challenge him."

In their letter, the former intelligence chiefs reiterated part of Brennan's admonition. "We have never before seen the approval or removal of security clearances used as a political tool," they wrote.

"[T]his action is quite clearly a signal to other former and current officials," they said. "As individuals who have cherished and helped preserve the right of Americans to free speech – even when that right has been used to criticize us – that signal is inappropriate and deeply regrettable."

This story has been updated to include Robert Gates, who signed the letter after it became public.