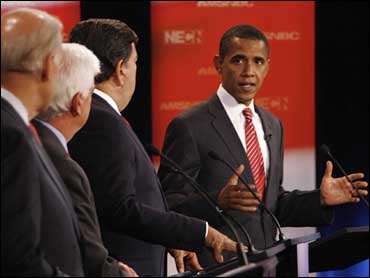 The leading Democratic White House hopefuls conceded Wednesday night they cannot guarantee to pull all U.S. combat troops from Iraq by the end of the next presidential term in 2013.

"I think it's hard to project four years from now," said Sen. Barack Obama of Illinois in the opening moments of a campaign debate in the nation's first primary state.

"It is very difficult to know what we're going to be inheriting," added Sen. Hillary Rodham Clinton of New York.

Sensing an opening, Sen. Christopher Dodd of Connecticut and New Mexico Gov. Bill Richardson provided the assurances the others would not.

"I'll get the job done," said Dodd, while Richardson said he would make sure the troops were home by the end of his first year in office.

"Democratic primary voters may pause when they consider that none of the three top-tier candidates were willing to promise a complete withdrawal of all U.S. troops from Iraq by the end of their first term as president," said CBSNews.com Senior Political Editor Vaughn Ververs.

Foreign policy blended with domestic issues at the debate on a Dartmouth College stage, and several of the contenders endorsed payroll tax increases to assure a stable Social Security system.

Sen. Joe Biden of Delaware and Rep. Dennis Kucinich of Ohio, as well as Dodd, Obama and Edwards all said they would apply the tax to income now exempted.

Richardson said he wouldn't and Clinton refused to say. "I'm not putting anything on the proverbial table" unilaterally, she said.

Current law levies a 6.2 percent payroll tax only on an individual's first $97,500 in annual income.

Biden also said he was willing to consider gradually raising the retirement age, which is now 67.

Kucinich said that while he favors taxing additional income, he wants to return the retirement age to 65, where it stood until the law was changed in 1983.

Health care, and the drive for universal coverage, also figured in the debate.

"I intend to be the health care president," said Clinton, adding she can now succeed at an undertaking that defeated her in 1993 when she was first lady.

But Biden said that unnamed special interests were no more willing to work with Clinton now than they were more than a decade ago.

"I'm not suggesting it's Hillary's fault...It's reality," he said, carefully avoiding a personal attack on the Democrat who leads in the polls.

Biden said a "lot of old stuff comes back" from past battles, adding, "when I say old stuff I mean policy. Policy."

Across the stage, Clinton smiled at that.

The moment was not the only one in which attention turned to the former first lady, a campaign front-runner bidding to become the first woman president.

"The headline of this debate… was other candidates now confirm that Hillary Clinton is the frontrunner," said CBS News chief Washington correspondent Bob Schieffer. "They know it, she knows it and they all acted that way. All the little barbs were directed at her but they were very, very polite."

Asked whether presidential libraries and foundations should disclose their donors, she said she had sponsored legislation requiring it. Asked whether her husband's foundation should voluntary disclose, absent a requirement, she said, "you'll have to ask them."

"I don't think about my private conversations with my husband," she added.

She seemed to suggest differently at another point, after being asked whether she would ever approve torturing a suspected terrorist to prevent the detonation of a nuclear bomb.

She said no, and Russert said former President Clinton, her husband, once suggested it might be appropriate.

"Well, he's not standing here right now," she said, an edge in her voice.

There is a disagreement, Russert rejoined.

"Well, I'll talk to him later," she said with a smile.

"She handled this just the way her people wanted her to handle it," Schieffer said.

A question about lowering the drinking age from 21 to 18 drew a cheer from the students listening in the Dartmouth auditorium.

And expressions of support only from former Sen. Mike Gravel of Alaska and Kucinich.

The opening question of the two-hour debate instantly plunged the eight contenders into the issue that has dominated all others - the war in Iraq.

With the primary season approaching, all eight have vied with increasing intensity for the support of anti-war voters likely to provide money and organizing muscle as the campaign progresses.

Edwards said his position on Iraq was different from Obama and Clinton, adding he would "immediately drawn down 40,000 to 50,000 troops." That's roughly half the 100,000 that Gen. David Petraeus, the top U.S. commander in Iraq, has indicated could be stationed there when President Bush's term ends in January 2009.

Edwards sought to draw a distinction between his position and Clinton's, saying she had said recently she wants to continue combat missions in Iraq.

"I do not want to continue combat missions in Iraq," he said.

Clinton responded quickly, saying Edwards had misstated her position. She said she favors the continued deployment of counterterrorism troops, not forces to engage in the type of combat now under way.

"Hillary Clinton did nothing to diminish her status as a front-runner but she is increasingly under fire on issues ranging from the Iraq war to her performance on health care reform in the 1990s," said Ververs. "No one else emerged tonight as her main challenger for the nomination but she didn't exactly close the door either."

Asked whether they were prepared to use force to prevent Iran from becoming a nuclear power, several of the hopefuls sidestepped. Instead, they said, all diplomacy must be exhausted in the effort.

Moderator Tim Russert of NBC News asked about Republican presidential hopeful Rudy Giuliani's pledge to set back Iran by eight to 10 years if it tries to gain nuclear standing.

Biden flashed anger at the mention of the former New York mayor. "Rudy Giuliani doesn't know what the heck he's talking about," said Delaware senator, who is chairman of the Senate Foreign Relations Committee.

"He's the most uninformed person on foreign policy that's now running for president."

The debate unfolded in the state that has held the first presidential primary in every campaign for generations.

The contest is tentatively scheduled for Jan. 22, but that is expected to change as other states maneuver for early voting position in the campaign calendar.