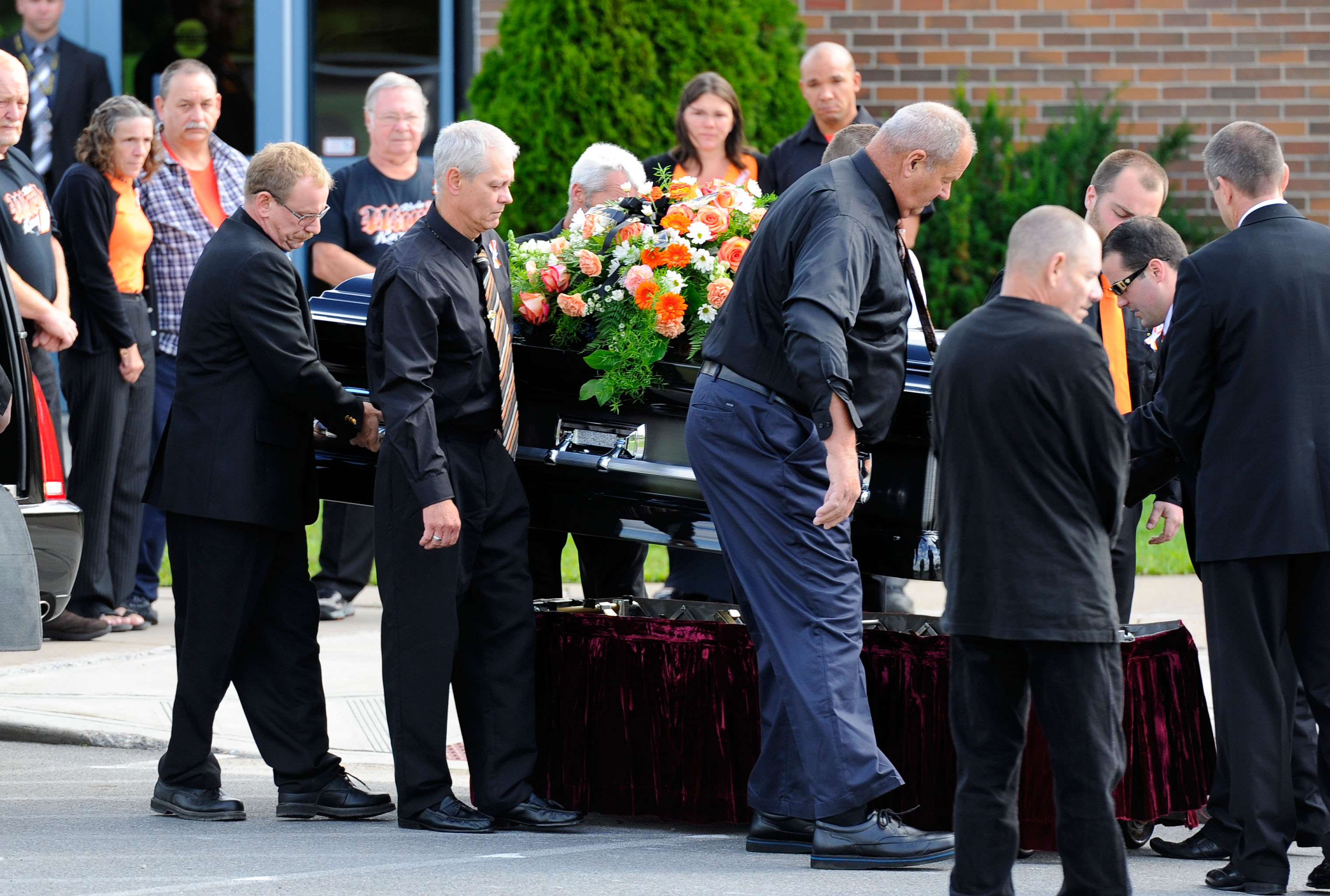 TURIN, N.Y. -- Kevin Ward Jr.'s family and friends praised the dirt-track racer as a "small-town boy" who loved his sport during the funeral for the 20-year-old driver who was killed by NASCAR champion Tony Stewart.

More than 700 mourners jammed the South Lewis Senior High School the auditorium Thursday for the 90-minute service, a mix of tears and cheerful recollections of a young man who began racing at a young age.

"Even if he had rough day, he always had a smile," a tearful Dylan Swiernick said of his best friend and car-obsessed buddy. "We were just two small-town boys trying to make it in the big world. He was always working on something. It was unbelievable how smart he was. He never got down on himself when weren't going his way."

Other friends and Ward's three sisters also spoke during the service, which filled the auditorium to capacity, with some mourners standing along the edges of the venue. Ward, a 2012 South Lewis graduate, was buried in his nearby hometown of Port Leyden, 55 miles from Syracuse.

After the service, as Ward's casket was taken to the hearse for the short trip to the cemetery, mourners let loose helium balloons in orange, white and black, his racing colors.

Ward was killed Saturday night at a dirt track 140 miles away in Canandaigua. The accident touched off angry debates as video of the crash circulated online, with fans questioning whether Stewart, known for his hot temper, tried to send his own message by buzzing Ward, or whether Ward recklessly stepped onto a dark track clad in black.

Stewart was racing a day before the Sprint Cup event at Watkins Glen. After a bump from Stewart sent Ward's winged car spinning into the wall, the young driver climbed out and walked onto the track in his black firesuit, gesturing angrily. Stewart's No. 14 car seemed to fishtail, and Ward was thrown through the air as his parents and fans watched in horror.

Kevin Ward Sr., who was at the track with his wife Pamela, told The Syracuse Post-Standard this week that Stewart was the best driver on the track that night, and there was no reason for him to hit the young driver after other cars avoided him.

"The one person that knows what happened that night is possibly facing 10 years in prison," Ward said. "Is he going to say what he done?"

No charges have been filed, but Ontario County Sheriff's deputies are still investigating.

Ward grew up in a racing family and started racing go-carts at age 4. He moved on to sprint cars and was Empire Super Sprint racing rookie of the year in 2012. He was one of a small, tight group of drivers that traveled to various races around New York state, parts of Canada and Pennsylvania.

Racing and working on cars in his father's shop, Westward Painting Co. of Lyons Falls, were his "double love," Ward's father told the Post-Standard.

''His goal was the race in the World of Outlaws," the top level for sprint cars, Ward said.

Stewart has been fined three times for his on-track behavior, as well as altercations with reporters, photographers and race officials. Two years ago, Stewart walked onto the track and threw his helmet at another driver he felt had wronged him.

Investigators are looking at everything from the muddy conditions of the track to whether the lights were working and sufficient. Stewart and his team declined CBS News' request for an interview earlier this week.