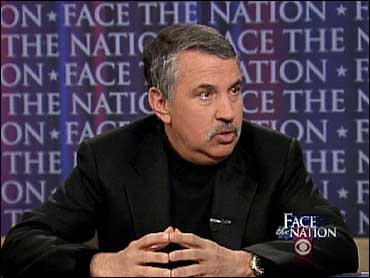 (CBS)
On CBS' Face The Nation this morning, New York Times columnist Tom Friedman weighed in on the financial crisis and the administration's plans to fight it, and said people should expect that whatever comes from the bailout of financial institutions, fairness will not be part of it.

"On the one hand fairness isn't on the menu anymore. Fairness has left the building," Friedman told host Bob Schieffer in regard to how the administration is handling AIG and today's news that the company has recently paid out $165 million in bonuses.. "From their point of view all that matters is avoiding systemic risks."

Friedman said the "central political dilemma" for the administration is that the overall basic problems within the banks are still a factor six months after the crisis began.

"We've got these toxic assets, these sub-prime mortgages on the balance sheets of all these institutions. We've got to get them off somehow. That's one side of it," Friedman said. "On the other side of it, Congress which has already shelled out $350 billion or more from taxpayers is saying, 'We're not going to give you another dime.'

Friedman said that the "Achilles heel" of President Obama's plans so far to combat the crisis is the lack of details that have been presented to the public, particularly on the plans to find private buyers to buy the toxic assets.

"There's still massive uncertainty… over what are going to be the rules. Therefore you can't unlock private capital… Some people estimate a trillion dollars or more private capital sitting on the sidelines just waiting to come in. You can see it last week in the stock market… No one wants to be late, no one wants to miss this.

"It's sitting out there but it's not going to come in until there is some certainty on what the rules of the game are. And the problem with getting that certainty is two-fold. One is the fairness issue. It's gonna be unfair. People who don't deserve to be bailed out are going to be bailed out. That's one problem. And the other problem is the incredible complexity of the issue. We've never seen this much leverage… It's all over the world wrapped in this much complexity and started in America. Untangling this incredible Gordian knot we've created is really going to be difficult."