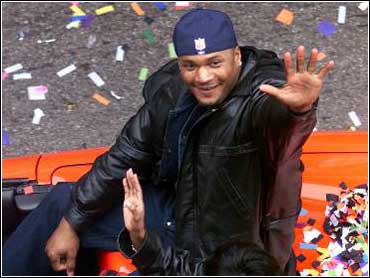 In a blur of Titans blue, thousands of fans filled downtown to thank the team for an unlikely journey that fell 3 feet short.

The parade Tuesday wound through downtown where players and coaches rode in convertibles and were showered in confetti in near-freezing temperatures.

The motorcade ended up at Adelphia Coliseum, where the team went undefeated en route to its first Super Bowl and a heartbreaking loss to the St. Louis Rams.

"I've been in a few St. Patrick's Day parades in New York, but this is incredible," said backup quarterback Neil O'Donnell, who used to play for the Jets.

Kicker Al Del Greco said: "This makes it all worthwhile. We know we're loved, and we'll do it next year."

Receiver Chris Sanders jumped out of his convertible, ran over and high-fived fans on both sides of the parade route and then jumped back in his car.

One sign along the parade route said it all: "12th man gives thanks." Another summed up the excitement from the team's trip to the Super Bowl: "Titans put wings on our dreams."

Some fans tossed confetti from buildings.

"This is the first time I've been in a parade ever, so this is pretty neat," receiver Kevin Dyson said.

Dyson, a hero in the wild-card win over Buffalo, was tackled on the final play of the Super Bowl just 1 yard from the end zone and the game-tying touchdown. The Rams won 23-16.

The Titans' parade snaked across the Cumberland River into Adelphia Coliseum, where even more fans waited, bundled in coats and blankets.

Mark Meghreblian of Franklin said he arrived in the parking lot at 7:45 a.m.

"I guess I was the third one in line," he said.

"This is the toughest place to play. This team is 9-0 here. This team needs home field advantage throughout the playoffs next year, and we need your help to do it and we're counting on it," Fisher told the crowd of about 20,000 in Adelphia Coliseum.

Quarterback Steve McNair thanked the fans for their support.

"Unfortunately, we came up short. But we're working hard, starting tomorrow, to get back to this point because this is an exciting feeling to see you people out here supporting us even though we came up short," he said.

Parents had protested the midday parade after educators said students would not be excused for taking a day off. That didn't stop hundreds of children from lining the parade route and gathering at the coliseum.

Barbara Carney of Brentwood took her daughters Tara, 15, and Ashley, 13, out of school at private Brentwood Academy for the events.

"I told my teacher I wasn't going to make it to class today. He said, 'Why?' And I said I was meeting some friends who were coming back into town," Ashley said.

Frank Wycheck, Eddie George, Bruce Matthews and Jevon Kearse missed the festivities because they were en route to Hawaii for the Pro Bowl.

The Titans finished 16-4, the franchise's best record ever. This was the first year with a new stadium and new name for the former Houston Oilers.

Costs of the celebration will be paid by the city, the Titans and Gaylord Entertainment Co., owner of the downtown arena where the parade began.

"It's a day to celebrate, and we'll worry about those other things later on," Nashville Mayor Bill Purcell said.