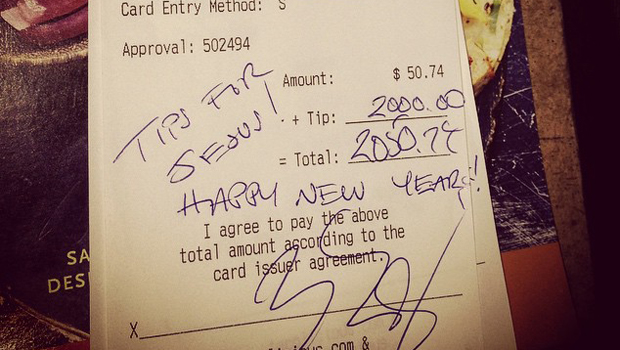 SAN FRANCISCO -- Servers at a San Francisco restaurant went home with a little extra cash last weekend after a mystery diner left a $2,000 tip with the note "Tips For Jesus."

A picture of the bill from Tacolicious in the Mission District with the note was posted to the "TipsForJesus" Instagram page showing dozens of other generous tips from around the country.

The tag on the Instagram page reads, "Doing the Lord's work, one tip at a time," CBS San Francisco reported.

Staff at the Tacolicious reportedly pools their tips, so no one single server kept the whole amount.

The mystery diners have left thousands of dollars in tips for staff from at least two other Bay Area restaurants as well as Chicago, New York and Mexico.

A Silicon Valley gossip site reported in 2013 that former PayPal executive Jack Selby was behind the acts of generosity.