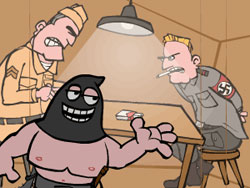 The delicate and unprecedented 50-50 power sharing arrangement by which the Senate has operated lasted just over four months, before Sen. James Jeffords of Vermont blew it up.

And while the change will be dramatic, it will, in some ways, return the Senate to a more normal way of operating, with one party in power. And that party will be the Democrats.

When the November election resulted in a 50-50 Senate split, it wasn't clear who would run the chamber, until the presidential election was resolved.

When Vice President Cheney took office the Republicans were in charge, since the Vice President can break ties. The GOP agreed to share power by giving Democrats an even number of seats on every committee and an equal budget and staff, while retaining the chairmanships and the all-important control of what legislation is brought to the Senate floor.

But by the simple act of switching from a Republican to an independent, Jeffords throws all that out the window.

Now Democratic leader Tom Daschle will become the leader of the Senate and every committee will get a Democratic chairman.

The Democrats, of course, will not be able to rule with an iron hand any more than the Republicans could, because the body is still divided on a razor thin margin.

There are still conservative Democrats, like Zell Miller of Georgia and Ben Nelson of Nebraska, who will often vote with the Republicans.

Click here to learn more about the 107th Congress.
But while they won't be able to drive the agenda, Democrats will be able to throw up a much bigger obstacle to President Bush's agenda and force him to compromise more than he would otherwise.

The most profound effect could be on nominations. Just this past week, the judiciary committee split evenly on the nomination of Ted Olson, a lawyer who represented President Bush in his election dispute at the Supreme Court, to be Solicitor General.

Under the 50-50 rules, Republicans can still bring that nomination to the floor. With Democrats in charge, it would have died in committee, which could be the fate of some future judicial nominations.

The circumstances would not be that different from when President Clinton had to deal with a Republican Senate, except that it's happening not because of an election, but because of the actions of one senator from Vermont.