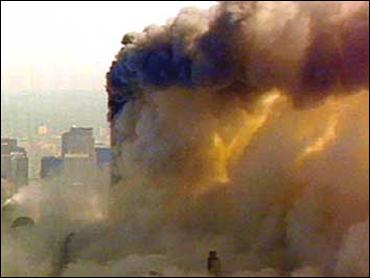 A timeline of the attacks in the United States on Tuesday (times EDT), according to witnesses, authorities and media reports:

9:31 a.m. President Bush calls the crashes an "pparent terrorist attack on our country."

9:48 a.m. The Capitol and West Wing of the White House are evacuated.

9:49 a.m. The Federal Aviation Administration bars aircraft takeoffs across the country. International flights in progress told to land in Canada.

10:37 a.m. Officials confirm that United Airlines Flight 93, en route to San Francisco from Newark, N.J., has crashed 80 miles southeast of Pittsburgh. None of the 45 people aboard believed to have survived.

10-11:30 a.m. Government buildings around the country are evacuated, including the Capitol and the White House. The United Nations closed down. The Securities and Exchange Commission closes all U.S. financial markets for the day. New York City Mayor Rudolph Giuliani calls for evacuation of lower Manhattan.

2:51 p.m. The Navy dispatches missile destroyers and other equipment to New York and Washington.