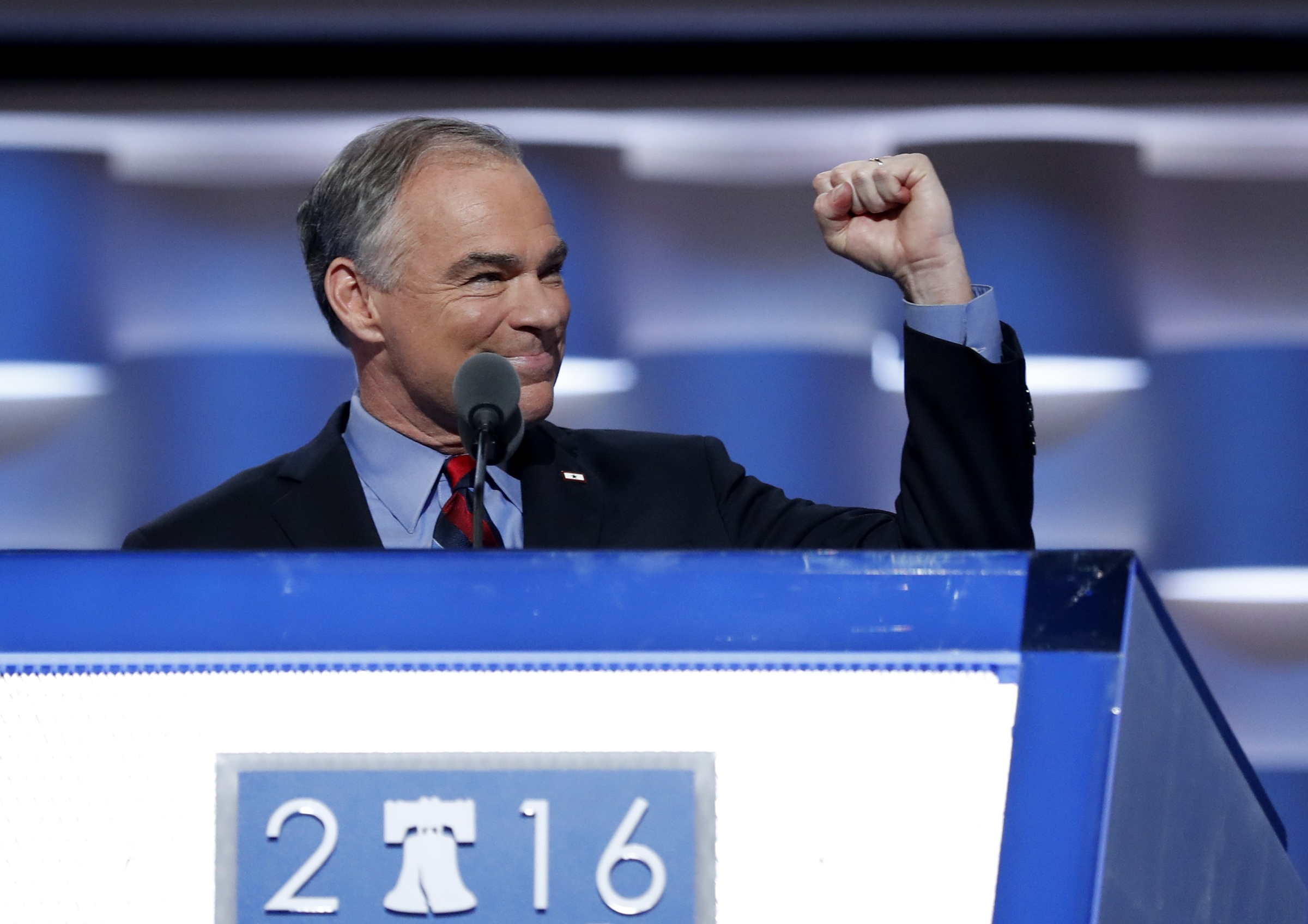 PHILADELPHIA -- On Wednesday night here in Philadelphia, Tim Kaine introduced himself to American voters--and previewed his role as an attack dog against Republican nominee Donald Trump.

Kaine, the Virginia senator who was just formally nominated as Democrats' candidate for vice president and Hillary Clinton's running mate, delivered a biography-laden speech with details about his upbringing and his political career. He said he trusts Clinton to lead the country--and went after Trump's business record, urging people not to believe his promises.

"Can I be honest with you about something? I never expected to be here," Kaine said. "But let me tell you how it happened."

Kaine said he was born in Minnesota and grew up in Kansas City, the son of an iron-working shop owner whose store he worked in each summer. "That's how small family businesses work," he said. "My parents, Al and Kathy, here tonight and going strong, taught me about hard work, and about kindness, and, most especially, about faith."

He spoke about attending a Jesuit school, which is where his faith "became something vital, my North Star for orienting my life"--which is why he took a year off during law school to volunteer as a Jesuit missionary in Honduras.

Kaine's father-in-law, Linwood Holton, is a former Republican governor of Virginia who during his tenure in the 1970s integrated Virginia's schools--and Kaine said Holton has been "voting for an awful lot of Democrats these days" because of the direction his party has taken.

"He's voting for Democrats because any party that would nominate Donald Trump for president has moved too far away from his party of Lincoln," he said. "If any of you are looking for that party of Lincoln, we've got a home for you right here in the Democratic Party."

At one point about midway through his speech, as Kaine was talking about his time in the senate, he mentioned Bernie Sanders -- only to be interrupted by Sanders backers who began loudly chanting, "Bernie! Bernie!" In response, Kaine seemed to ad-lib, giving a nod to the Sanders supporters' slogan: "We all should feel the Bern -- and we all should not want to get burned by the other guy."

Kaine spoke about why he trusts running mate Hillary Clinton, praising her consistency as a passionate and lifelong advocate of the underserved, with tangible accomplishments to her name. Polling consistently shows that Clinton has struggled to be seen as honest and trustworthy throughout her campaign.

"I want to tell you why I trust Hillary Clinton," he said. "First, she's consistent. She has battled to put kids and families first since she was a teenager - in good times and bad, in victory and defeat, in and out of office, through hell or high water."

He used that opportunity to compare Clinton with Republican nominee Donald Trump, a man, he says, who truly only cares about himself.

"When you want to know about the character of somebody in public life, look to see if they have a passion that began long before they were in office, and that they have consistently held it throughout their career," he said. "...Folks, Hillary has a passion for kids and families. Donald Trump has a passion too: It's himself."

Kaine went on to do an impression of Trump and his frequent call for voters to "believe me," saying Trump is proved wrong by how he duped investors, consumers and others in his history of business deals. He called again for Trump to release his tax returns. "Hey Donald, what are you hiding?" he asked.

"He says 'believe me.' Well, his creditors, his contractors, his laid-off employees, and his ripped-off students did just that and they all got hurt," Kaine said. "Folks, you cannot believe one word that comes out of Donald Trump's mouth. Not one word. Our nation is too great to put it in the hands of a slick-talking, empty-promising, self-promoting, one man wrecking crew."

To close, Kaine returned to his time in Honduras, saying the best compliment you could give anyone there is that they're "listo," or "ready." Clinton, he said, is "ready" to be president.

"When I lived in Honduras, I learned something: the best compliment you could pay to somebody was to say they were 'listo'- ready," he said. "Not 'inteligente'- smart. Not 'amable'- friendly. Not 'rico' - rich. But 'listo'--because what 'listo' means in Spanish is prepared, battle-tested, rock-solid, up for anything, never backing down," he said. "And Hillary Clinton, she's 'lista.'"