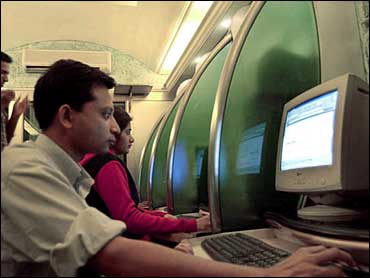 Most of us like to complain about slow Wi-Fi connections or too many popup ads on websites. But billions of people around the world wish they had these problems.

A new report from the United Nations' Broadband Commission found that a whopping 57 percent of the world or a total of 4.2 billion people don't have regular access to the Internet.

Access is worst in least developing countries (LDCs), where only one in 10 people is online, the report found. A gender divide is also "proving incredibly difficult to overcome, reflecting broader social gender inequalities."

"The digital divide is proving stubbornly persistent in terms of access to broadband Internet, including the challenge of extending last-mile access to infrastructure to remote and rural communities," according to the report.

The report comes as a growing number of tech companies, led by Facebook and Google, are trying to come up with ways to connect the world. Facebook, for example, wants to use solar-powered drones to connect 4 billion people across the world on the Internet. SpaceX founder and CEO Elon Musk also said he wants to deploy an array of small satellites to deliver low cost Internet access around the world.

The report called on countries to adopt "effective policies and strategies to make broadband available, affordable and accessible, as a vital enabler of sustainable development in modern-day knowledge societies." It also called for all countries to draw up a National Broadband plan, which can "play an especially important role in coordinating public and private sector actions and in prioritizing and promoting national broadband development."

Currently only 148 countries have such a plan.

"It is increasingly vital to extend access to digital education services, new capabilities, culture, entertainment, healthcare, financial and commercial services, along with training and education," according to the report. "An 'information revolution' is needed to help inform and improve policy-making. Public and private sectors must work together in close partnership to achieve broadband for all."

Despite the gaps in access, the report found that telecoms in much of the world are on the rise.

Citing data from the consultancy IDC, the report found that the total telecom sector was worth $1.67 trillion in 2013, growing by 1 to 2 percent per year, driven mainly by expansion in China and emerging markets. Global IT and telecom spending is expected to grow by 3.8 percent to around $3.8 trillion for 2015 alone.

The mobile sector has also shown strong growth, with the International Telecommunications Union projecting that the number of mobile phone subscriptions by the end of the year will soon rival the global population, reaching upwards of 7.1 billion.

According to Ovum, which analyzes the telecom, mobile and media markets, mobile cellular subscriptions will grow to 8.5 billion by 2019, of which 6.5 billion will be mobile broadband subscriptions.

The research firm Infonetics also estimates that mobile data services including text messaging and mobile broadband rose across the board in every region in 2014, thanks to the growing use of smartphones.

But the report said that growth has been inconsistent, noting that European mobile operators have seen a decline in revenues for the past several years.