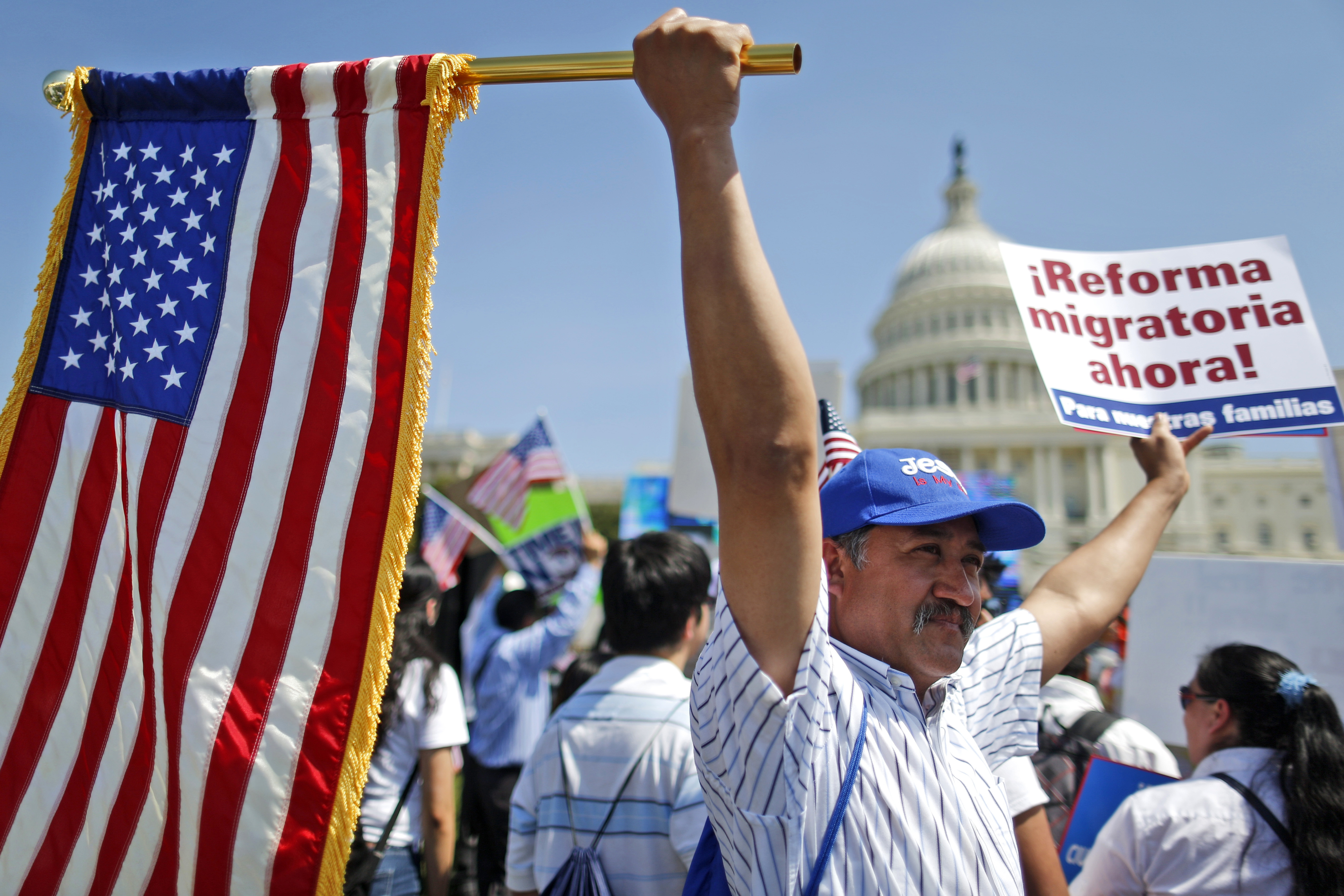 WASHINGTON Tens of thousands of immigrants and activists rallied nationwide Wednesday in a coordinated set of protests aimed at pressing Congress to approve immigration measures that would grant 11 million immigrants living here illegally a path toward citizenship.

Organizers said demonstrations were taking place in at least 18 states and in Washington, D.C., where a large, festive crowd gathered on the west lawn of the U.S. Capitol Wednesday afternoon. Many carried hand-lettered signs and chanted "Si, se puede," Spanish for "Yes, we can."

"We won't win immigration reform just coming to Washington. We need to walk the streets all over the country," said Ben Monterroso, national director of civic participation of the Service Employees International Union, which represents nurses and lower-wage employees including janitors and child care workers.

In Atlanta, more than 1,000 people marched around the Georgia Capitol Wednesday midday, calling for comprehensive changes to immigration policy and an end to deportation.

Supporters massed in several rallies in New York City, including in the Washington Heights section, as well as in Queens, Manhattan and The Bronx.

In San Francisco, several hundred demonstrators marched toward the federal building holding red and orange paper flowers representing the number of people deported daily for immigration violations. In San Diego, about 50 demonstrators gathered on a sidewalk outside the office of U.S. Sen. Dianne Feinstein, a sharp contrast to massive protests in 2006 when thousands of demonstrators shut down downtown streets to support looser immigration policies.

Senators writing a sweeping immigration bill have said they hope to finish their work this week, opening what's sure to be a raucous public debate over measures to secure the border, allow tens of thousands of foreign workers into the country and grant eventual citizenship to the millions living illegally in the United States.

A person familiar with proposed bipartisan immigration legislation being written in the Senate said Wednesday the bill would require greatly expanded surveillance of the U.S. border with Mexico and greatly increased detention of border crossers in high-risk areas. The person provided the information on condition of anonymity because the deliberations were private.

Groups opposed to illegal immigration say they aren't worried that lawmakers or voters will be swayed by emotional messages, and argue that extending legal rights to immigrants living illegally in the U.S. will create financial problems for cash-starved governments and spur more illegal immigration.

"There ought to be a rally for the 20 million Americans who can't find a full-time job," NumbersUSA President Roy Beck, whose group advocates reductions in immigration levels, said in a statement Wednesday.

Immigration rights activists said the size of their movement would be on display at rallies around the country, including in the nation's capital, where National Association for the Advancement of Colored People President Benjamin Jealous delivered the keynote address.

The activists already claim victories nationwide, including a successful lobbying effort against a plan in North Carolina to provide driver's licenses to immigrants with the words: "NO LAWFUL STATUS."

The immigrant activism movement gained national attention in 2007 when President George W. Bush and a bipartisan group of lawmakers unsuccessfully tried comprehensive immigration overhaul. Some high school and college students who were brought to the U.S. as young children began living openly and holding rallies.

The movement gained new supporters in 2010, when Congress debated but did not pass the DREAM Act — legislation that would have granted legal status to young immigrants living illegally in the country.