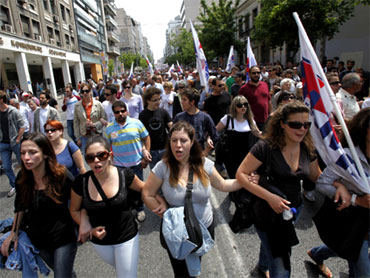 More than 20,000 protesters marched to parliament Thursday, as unions challenged harsh austerity measures in Greece by staging their fourth general strike this year.

Riot police held back demonstrators chanting "Thieves, thieves!" Store owners closed up and lowered protective shutters before the march got under way.

Police deployed 1,700 officers and detained 36 people in an early show of force after violent protests two weeks ago left three people dead in a bank fire.

The strike closed schools, halted ferries and trains, and kept hospitals running on emergency staff. The Acropolis and other ancient sites were also shut.

Unions are protesting harsh measures imposed by the cash-strapped government. During Greece's last general strike May 5, three workers - including a pregnant woman - died when a bank was torched by rioters.

Public anger has grown against deep pension and salary cuts, as well as steep tax hikes, imposed in an attempt to pull Greece out of an unprecedented debt crisis. The measures were needed for Greece to receive a euro110 billion ($134.97 billion) three-year rescue loan package from other EU countries and the International Monetary Fund that staved off bankruptcy.

"Workers must drive this protest and force the government to act," he said.

Earlier, members of a communist-backed labor union staged an occupation of the Labor Ministry and held a separate peaceful rally. About 5,000 protesters also marched in Greece's No. 2 city Thessaloniki.

"When will construction workers retire, at age 80?" Communist Party lawmaker Haralambos Haralambous asked. "How do you expect him to carry a bag of cement on his back until that age?"

Thursday's major strike - the fourth this year - affected all public and many private employers. However, unlike other general walkouts, most flights were unaffected as air traffic controllers stayed on the job. Some small regional airports closed, and Greece's Olympic Air carrier said it was canceling 30 domestic flights.

The country's debt crisis has sent shock waves through global markets. That, combined with fears for Europe's struggling economy and German warnings that the future of the euro is at stake, sent the common currency to a four-year low against the dollar Wednesday.