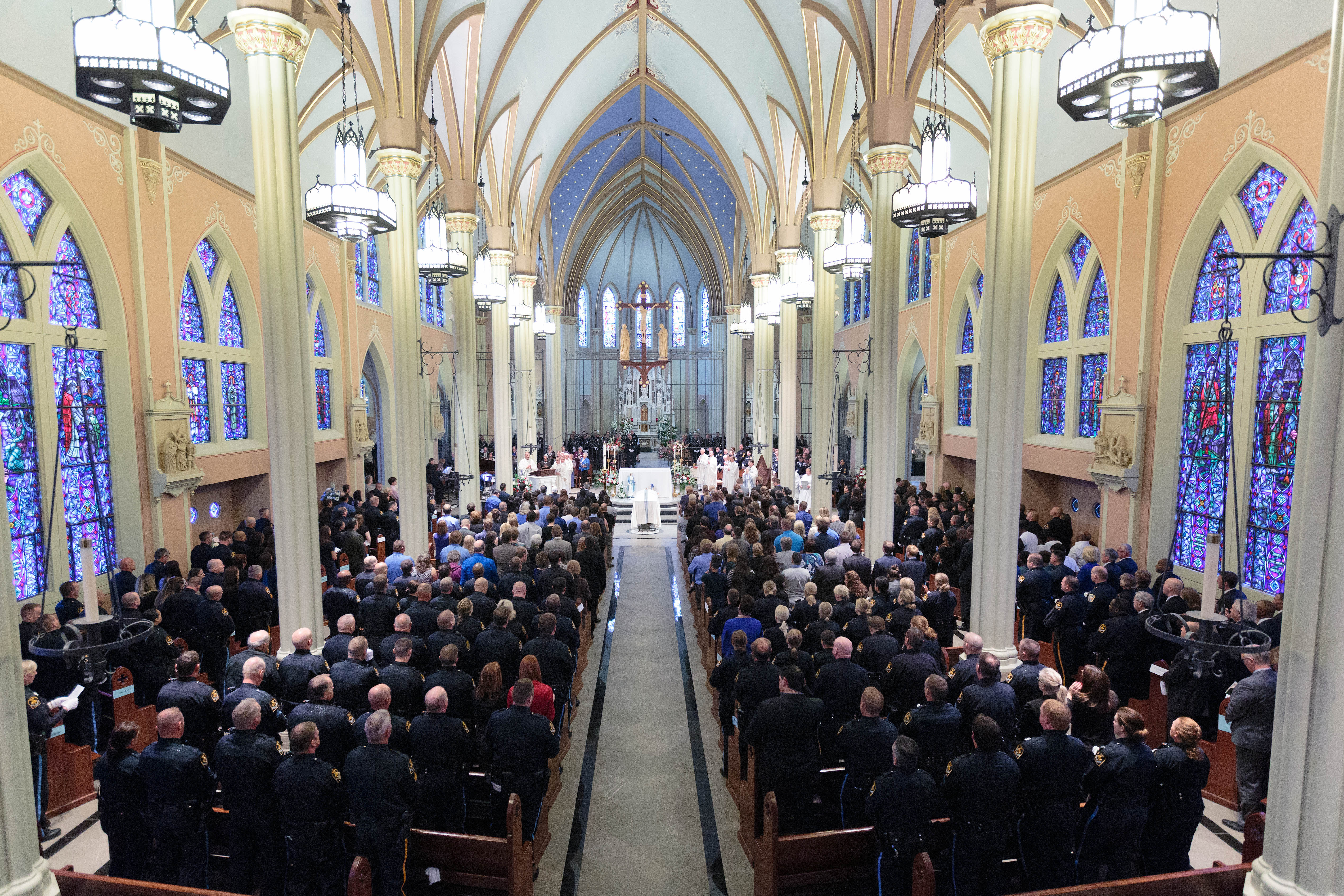 OMAHA, Neb. -- Omaha police officer Kerrie Orozco was one day away from going on maternity leave to care for the daughter she had delivered prematurely three months earlier when she answered a call to help a fellow officer.

Within minutes, Orozco lay in a yard fatally wounded. She had been shot by a man wanted for an earlier shooting.

On Tuesday, the 29-year-old Iowa native's family and close friends honored her at a church funeral in Omaha. Hundreds of her colleagues also attended the service, while thousands more law enforcement officers and first responders who traveled from around the country watched a video feed at the CenturyLink Center arena in downtown Omaha.

Before her daughter, Olivia Ruth, was born prematurely on Feb. 17, Orozco's original due date had been Tuesday. Instead, it became Orozco's funeral date after Marcus Wheeler opened fire on officers trying to arrest him.

Orozco, a member of the Omaha department's gang unit, was hit just above her protective vest by one bullet in the shooting last Wednesday. Another officer returned fire and hit the 26-year-old Wheeler. Both the officer and suspect died at an Omaha hospital.

Orozco had postponed her maternity leave while her baby remained in a hospital prenatal care unit. The infant was to be released from the hospital the day after her mother was killed. Donations to Orozco's family, including for a college fund for Olivia Ruth, have poured in.

She was the first female officer for the city to be killed in the line of duty, and the first Omaha officer in more than 10 years to die while serving.

Orozco also was a stepmother to Natalia, 8, and Santiago, 6, who are the children of her husband, Hector Orozco Lopez. The family lived in Council Bluffs, Iowa, and Orozco was a native of nearby Walnut, Iowa.

Officers told CBS affiliate KMTV in Omaha that no matter the jurisdiction, all law enforcement officers are considered family.

"We have nobody but ourselves to support us. Whenever you call the police the police come, when the police call, all we have is each other to come," said Sgt. Ron Koch of Crete, Nebraska.

"They say it's a brotherhood, for us it's also a sisterhood," said Officer Michelle Skaggs, who traveled with two other female officers from Maryland Heights, Missouri, for Orozco's funeral. "We are sisters inside and outside of our department."

After policing during the Ferguson riots and now watching a fellow woman officer be laid to rest, the women told the station that police need each other now more than ever.

"It's been a rough year for law enforcement in general. We are from St. Louis and Ferguson is pretty close to us. We dealt with a lot, but this is pretty hard for everyone," said Officer Erica Stough.

The women say they will make sure baby Olivia knows how special her mother was.

"Her mother paid the ultimate sacrifice. But we would all do it, any time we need to" Officer Maureen Baker said.

Orozco volunteered for the Girl Scouts, Special Olympics and various community outreach programs and had been given the Police Department's Outstanding Volunteer Service Award this spring. Orozco also had coached an inner-city Omaha baseball team for years. Players, who knew her as "Coach K," attended her funeral.

"I can't think of a better representative of our profession than Kerrie Orozco," Omaha Police Chief Todd Schmaderer said at the service. Schmaderer had helped train Orozco when she was a police recruit. In the years that followed, he said, he simply came to know her as his friend.

"She got people to look past the fact that she was a police officer," he said. "I see her legacy as that of breaking down barriers."

Omaha probation officer Kristina Reiter, who worked with Orozco and watched the funeral on video inside the arena, said, "She treated everyone with respect. Even those people she arrested, she didn't talk down to or belittle."

Those leaving the funeral were met by thousands of people who braved rain and unseasonably cool temperatures to line streets along the funeral procession route. Orozco's casket was taken to a Council Bluffs cemetery for her burial after the service.