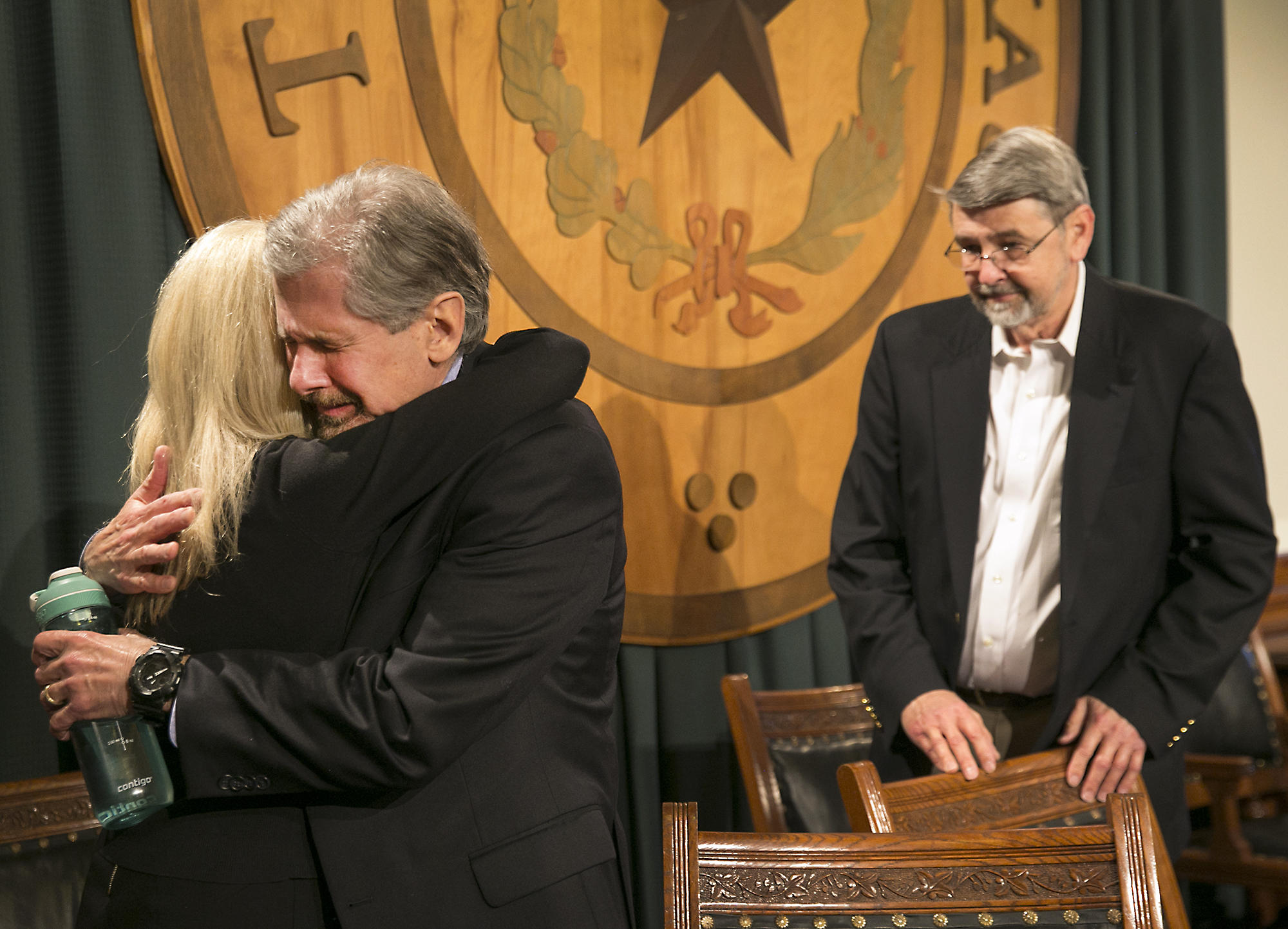 HOUSTON -- The fate of a convicted Texas killer was in Gov. Greg Abbott's hands Wednesday after the state parole board recommended sparing the prisoner's life at the urging of his father, who survived the attack. Thomas "Bart" Whitaker is scheduled for lethal injection Thursday for arranging the fatal shootings of his mother and brother at their suburban Houston home in 2003.

Whitaker's father, Kent, also was shot but survived and has led the effort to save his 38-year-old son from execution.

The seven-member Texas Board of Pardons and Paroles, whose members are appointed by the governor, made the unanimous recommendation Tuesday that Abbott commute Whitaker's death sentence.

The last time the board has recommended clemency for a death row inmate was nearly a decade ago, in 2007, CBS San Antonio affiliate KENS reports.

Abbott's options appeared to be accepting the recommendation, rejecting it or doing nothing. His office was silent midday Wednesday about the Whitaker case.

"I think the most important thing is both I and my staff have the opportunity to evaluate all the facts, all the circumstances, all the law, and base our decision on all of that information," Abbott, who is running for re-election, said late Tuesday at a campaign appearance in Houston.

"Any time anybody's life is at stake, that's a very serious matter," Abbott said. "And it deserves very serious consideration on my part."

Keith Hampton, one of Whitaker's attorneys, said if Abbott did nothing, Whitaker "gets executed." Another of Whitaker lawyer's, James Rytting, said while state law language doesn't specify the governor "must" act, no decision would "look bad" and possibly spur a due process violation legal challenge.

"I don't know why Abbott would not go along with this," Hampton said. "The clock's ticking. I'm just waiting."

It's only the fourth time since the state resumed executions in 1982 that the parole board has recommended clemency within days of an inmate's scheduled execution. In the previous cases, then-Gov. Rick Perry accepted the board's decision in one case and rejected the other two, who subsequently were put to death in the nation's most active capital punishment state.

Hampton said he and Whitaker's father went to the office of Abbott's general counsel immediately after the board ruling Tuesday but weren't allowed in.

"I'm very worried about conversations that are going on and a ticking clock and I've never sat down with anybody from the general counsel's office," he said. "He has the authority to wait until 5:55 on Thursday, but why put everybody through that?"

Rytting said Abbott should trust the parole board.

"That's what the board is for," he said. "And there is no ambiguity here. They all came to the same conclusion."

Prosecutors in Fort Bend County, where the killings occurred at the Whitaker home in Sugar Land, just southwest of Houston, criticized the parole board recommendation.

"I guess the 12 jurors' opinion means nothing to the parole board," Fred Felcman, one of the trial prosecutors, said. He said if Abbott signed off on the clemency request, "then it's a total injustice, absolute injustice on this."

Kent and Patricia Whitaker and their two boys had returned to their home following a restaurant dinner to celebrate Bart Whitaker's college graduation when they were confronted by a gunman wearing dark clothes and a ski mask. All four were shot. Patricia Whitaker and her 19-year-old son, Kevin, were killed.

Nearly two years later, Bart Whitaker was arrested in Mexico after investigators determined he masterminded the murder plot against his family in hopes of collecting the family estate of more than $1 million.

He hated his parents and brother at the time, he said.

Whitaker's father says he has forgiven his son, calling him a changed person.

"As the greatest victim in this case, you don't have to convince me how awful this crime was," Kent Whitaker said. "I've lived it for 14 years now. But that doesn't mean the death penalty was the right choice in this case."

The U.S. Supreme Court last year refused to review appeals in Whitaker's case. Whitaker and another Texas death row inmate are plaintiffs in an appeal pending before the high court questioning the legality of Texas' lethal injection protocol and procedures.

Evidence showed the murder plot included two of his friends and was at least his third attempt to kill his family. As part of the scheme, Whitaker was shot in the arm to draw attention away from him. Unknown to his parents, the dinner celebration marking his graduation was a fraud. He'd dropped out of school months earlier.

The gunman, Chris Brashear, pleaded guilty in 2007 to a murder charge and is serving life in prison. Another man, Steve Champagne, who drove Brashear from the Whitaker house the night of the shootings, took a 15-year prison term in exchange for testifying at Whitaker's trial.