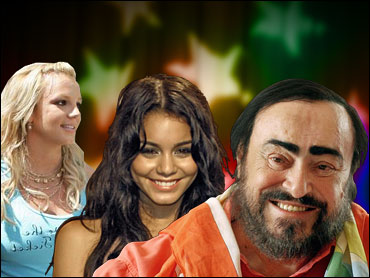 Forget Jan. 1. As any school child can tell you, the new year really begins in September.

That's when the pace of life picks up after a summer of reruns and vacations. Suddenly, there are new shows on network TV, openings on Broadway and Oscar-worthy movies at the multiplex.

American moviegoers got a taste of the season ahead when the Venice Film Festival opened last weekend. Heavyweight like, George Clooney, Matt Damon and Brad Pitt turned up to promote their latest projects. Then they made a detour to the Normandy coast, where the American Film Festival was taking place in Deauville, France. Next up is the Toronto Film Festival.

TV viewers were given a glimpse of the season ahead when two reality TV shows released details of the new casts. "Survivor" an old show breaking new ground in China, will feature a gravedigger, a poker player and a jeweler among its 16 contestants. The professionals in "Dancing With Stars" will be cutting the rug with Wayne Newton, Marie Osmond and Mark Cuban, among other celebrities.

"The View" got a full complement of co-hosts with the announcement that Sherri Shepherd will join the show next week. The news came during Whoopi Goldberg's first week on the morning TV talk show.

Taking advantage of September's sense of renewal is dethroned pop princess Britney Spears, who is looking to get her career back on track with an appearance on this weekend's MTV Music Video Awards. It has been years since the singer had a new album and in between she's weathered a messy divorce and child custody battle, a very public spat with her mother, a stint in rehab and a head-shaving meltdown.

Another catastrophe-prone pop icon, Lindsay Lohan, is still one rehab away from a comeback, but she is trying to come to terms with her past. Her father, Michael Lohan, paid her a visit at the Cirque Lodge treatment center in Utah on Wednesday. It was the first time she had seen him since he went back to prison in 2005. (He was released last spring.)

"Spider-Man" star Tobey Maguire is starting a new life as a married man, having wed his sweetheart Jennifer Meyer in a secret ceremony Monday in Hawaii. The two had a daughter in November.

Also embarking on a new phase of her life is 41-year-old actress Halle Berry, who has said she is three months pregnant with her first child. The father is father is model Gabriel Aubry, whom Berry met in November 2005.

Kim Porter, Diddy's ex-girlfriend and the mother of his three children, chose a dramatic way to begin a single life. While the music mogul, whose real name is Sean Combs, was out of town, she packed up the kids and the house, right down to the kitchen table, and left town. Her reason? "Puffy's an action person, not a talk person," she said. "So I had to have an action."

"High School Musical 2" star Vanessa Hudgens got a new image this week, but not one that she wanted. A nude picture of the squeaky-clean Disney Channel star has appeared on the Internet. Her publicist says it was taken privately and should not have become a public matter.

Fashionistas are looking way ahead to the spring of 2008 this week at Fashion Week in New York. Dozens of popular designers are showing their new clothes under the tents at Bryant Park.

And finally, the music world just won't be the same without the voice of Luciano Pavarotti. The 71-year-old tenor died of pancreatic cancer on Thursday and will be laid to rest in his native Italy this weekend.
By MARY JAYNE McKAY