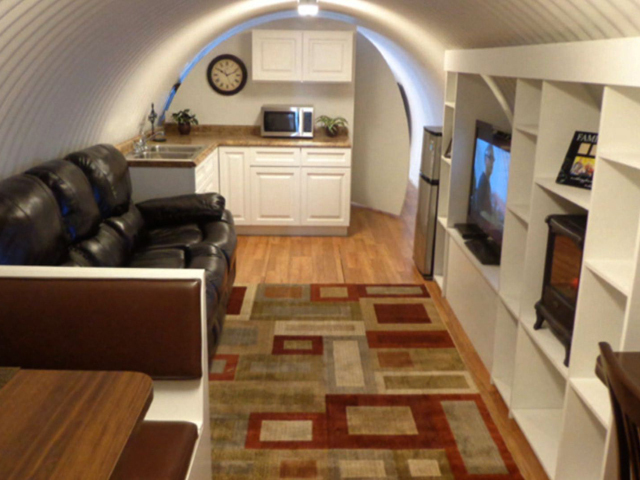 (CBS News) MONTEBELLO, Calif. - There's nothing new about predictions that the end of the world is upon us. But there's plenty new about how some people are preparing for it.

What began as a pipe dream for Ron Hubbard has become big business...underground

"We call this the backyard bunker," Hubbard said as he showed us one of his survival shelters.

These days, the fear market is booming.

"I can't build them fast enough right now," he said. "It's better to have a shelter 10 years early than five minutes late."

But unlike those Cold War-era concrete bunkers with just the basics, these survival shelters come fully loaded.

"It's got everything a house does," Hubbard said. "It's just 20-feet underground. Luxury bedrooms, big screen TVs , game room, underground pool. You can have anything you want." He's even seen people put Jacuzzis in them.

Hubbard is selling safety and style in a world with no shortage of apocalyptic possibilities.

"In the '60s," he said, "they only worried about the nuclear attacks from Cuba and Russia. Now we have to worry about biological attacks, chemical warfare, terrorist threats, economic crash, nuclear fallout, nuclear threats from Korea and China."

He acknowledged that when people think about survivalists and survival shelters, they think about folks who "might be crackpots. I thought there would be some looney tunes that would show up. But no, these are professionals."

Like Robert Acosta, a Los Angeles businessman who's banking on his own $85,000 bunker. "You gotta take precautions and you gotta look out for your family for the future...just in case."

At worst, it's a very nice guest house. "Yes, it is," said Acosta. "When I have relatives that come visit, 'Sorry, I only have three rooms. We may have to put you in the bunker outside.'"

Whether it's missiles or melting markets, "it's amazing what we can do underground," said Hubbard. "There's no limit."

"I mean I hope it never happens," he continued. "But mathematically, it all adds up to Armageddon."

Down here, Armageddon can wait.