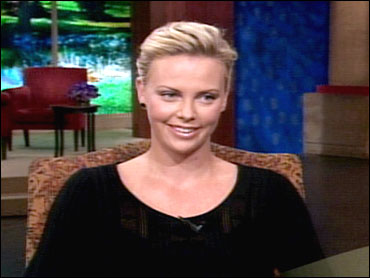 Charlize Theron is often called one of the most beautiful and talented women in Hollywood. She can easily segue from the glamour of "The Italian Job" to the drama of her Academy Award-winning role in "Monster."

In her latest film, "North Country," she plays Josey Aimes, a single mother fighting sexual harassment in the iron mine where she works.

"The mine was kind of this very mysterious thing for all of the women," Theron told The Early Show co-anchor Hannah Storm. "In there, they realized pretty quickly that they were taking jobs where there weren't jobs to be taken. And that these guys were going to try and break them down so that they would just leave."

Inspired by a true story, the film follows Josey's journey on a road that will lead her to the nation's first-ever class action lawsuit for sexual harassment.

"The thing that's great about this story is it's not just about the first class action sexual harassment case," Theron said. "It's really also about this community and about people just trying to survive."

To prepare for her role, Theron actually worked a shift in the mines for 12 hours and met a few of the women who work there.

"I think the most important thing that I got from them was when I got to be with their families and with their children," Theron said. "These were just people trying to make ends meet and trying to put food on the table. I think that was the part that moved me the most.

"Then they started telling me stories about how this abuse didn't just affect them. It affected their children when they went to school, when they went to go play hockey. It wasn't just something that happened at work and then it was done. It really bled into the community and there was just this constant fight."

In the movie, her character goes to her boss about the harassment, but he doesn't do much about it — something women who work in male dominated fields may relate to.

"I was a little mad at myself because I feel very fortunate," Theron said. "I feel like I work in an environment where I've never had to face anything like that. I'm young and I think part of me is like the feminist movement happened in the '60s and everything is fine.

"When I read this script, I really did think it was a typo. I really couldn't believe it just happened. Then when I jumped on the Internet and realized this case is only finally settled in '98, I thought we have come a long way but still have a lot to do.

"I can't sit back and be complacent thinking because I'm fortunate that everyone else has the same working conditions. The thing that I realized when we went back, to be there with this community, is that you can change over laws, but you don't, overnight, change how people think. It takes a long time to get that across.

"And like Josey in the film, she starts with her children. She doesn't want her son or her daughter to be the next generation to carry that on. And I think it's going to take some time."