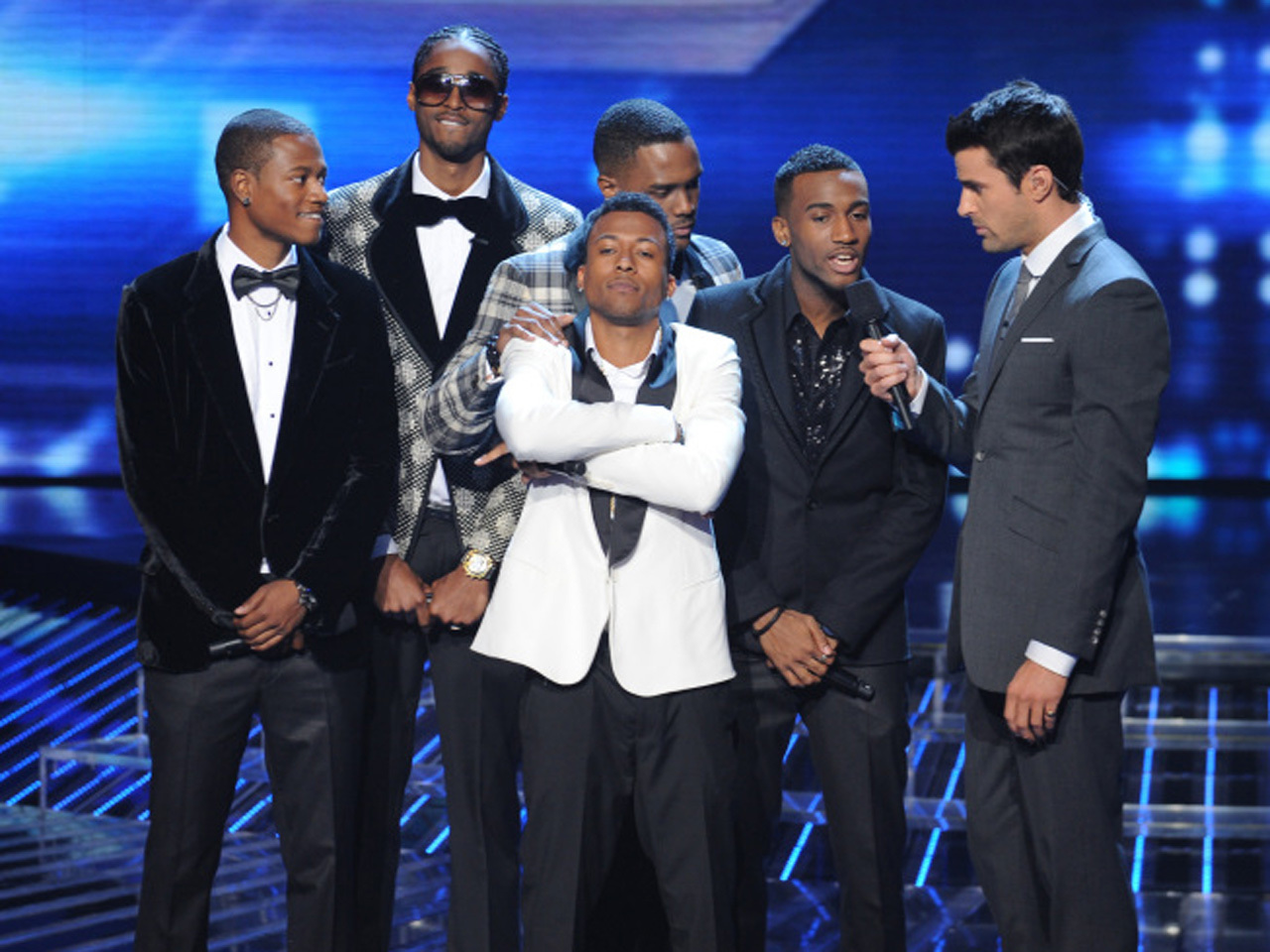 (CBS) Singing with other humans isn't easy. "The X Factor" proves it every week, as does "American Idol."

Each opens its results show with all the contestants singing together with as much harmony as a Mongoose and Snake Convention. Even when they're miming.

So let's swiftly move right along from this week's desperate "X Factor" group effort and slide along to the desperate apology that followed it. L.A. Reid wanted to say sorry to Melanie Amaro for criticizing her the night before.

Indeed. What else could it have been?

As we pondered Reid's limitless logic, Willow Smith ran onto the stage and performed with fire. She positively brims with stones. She was wearing something vaguely sci-fi that was so tight you wondered whether it had been painted onto her. Perhaps she got it for her 11th birthday, which she recently celebrated.

The only surprising thing was that "X Factor" Astro didn't emerge from the wings to join her in a combustible teeny confidencefest.

Next were the results, right?

No, no. We still had 30 minutes of ads to sell. So Jessie J, she of England and the big money hit called "Price Tag," emerged in a two-piece bodytard that also seemed painted onto her body.

She sang something called "Domino." One lyric fell after another to a tune that few will have remembered by the end of the next commercial break.

Suddenly, the results poured forward with the classic lack of a particular order.

Stacy Francis, Astro, and so many other names flowed from the vaguely moving lips of Steve Jones. Left were Lakoda Rayne, Stereo Hogzz and Chris Rene.

Chris Rene? This was in no particular order, remember. So he might have received more votes than anyone. Or he might not. Shakespeare invented this sort of drama. And Rene does sing in his own version of iambic pentameter.

But of course he was safe. The other acts were groups and, even though Rene was mediocre on Wednesday, enough girls surely find him both vulnerable and therefore sexy.

Which meant that Paula Abdul felt a large golfball invade her throat without anyone even shouting "fore."

Two groups had to sing for their McDonalds for the second week running.

Lakoda Rayne were first. With deep appropriateness, they sang "No Air," a song made famous by another unlikely ensemble: Jordin Sparks and Chris Brown.

It's a little unfair to be unfair to Lakoda Rayne. They are a random group of pretty girls slapped together by Cowell at the last minute when they hadn't qualified as individual singers. I am sure the fact that they are pretty girls had nothing to do with Cowell's decision.

Still, they struggled through their performance with sharp accents and sharp nerves, which created a sharp diversion from the original.

Could the Stereo Hogzz possibly lower the bar further? Their "You Are Not Alone" was something you might hear at a wedding - sung by the groom and a few friends. To add to the effect, three of them were wearing bow ties. The lead singer tried very, very hard to pull them through, but the boys from Houston were less Whitney and more "We Have A Problem."

L.A. Reid thought that both groups struggled. Of course, he admired both of them, but he decided the Stereo Hogzz had to go.

Scherzinger decided to vote along sexist lines. She admitted it. She also chose the Stereo Hogzz to exit.

What would Abdul do? Would she begin to tear at her hair, rend her garments and cry, the beloved country?

As Cowell looked to her with something bordering on sympathy (for Cowell), she insisted: "I'm not going to do this again."

Just when one thought she might collapse or simply run away, she croaked: "I want to save the Stereo Hogzz."

But she could not. Cowell put her out of her misery. He ordered the Stereo Hogzz to pack their bow ties and go. Yes, the band that just two weeks ago he had decreed was, well, the best band in the world.

You can't trust anything people in the music business say, can you?

Jones, with epic timing, turned to one of the Stereo Hogzz and asked: "How do you feel?"