(CBS)
Peter Maer is a CBS News White House Correspondent. He has covered the beat since 1977.

It's a day for White House historians and reporters to wish for a "fly on the wall" moment as President Bush, President-elect Obama and their predecessors Jimmy Carter, George H.W. Bush and Bill Clinton meet at the White House. The meeting was Mr. Obama's idea. The White House says George W. Bush was happy to arrange it.

Reporters only had a quick photo-session glimpse of the unique fraternity. It was a bi-partisan mutual admiration society as President Bush told his soon-to-be successor, " We want you to succeed. Whether we're a Democrat or a Republican, we care deeply about this country. To the extent we can, we look forward to sharing our experiences with you. All of us who have served in this office understand the office itself transcends the individual. We wish you all the very best and so does the country."

After shaking hands with President Bush, Mr. Obama said, " This is an extraordinary gathering. All of the gentlemen here understand both the pressures and possibilities of this office. For me to have the opportunity to get advice, good counsel and fellowship with these individuals is extraordinary." CBS News Senior White House Correspondent Bill Plante asked the president-elect what he could learn from the mistakes of his predecessors. Mr. Obama responded, "from their successes!" 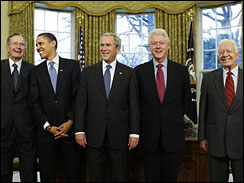 Reporters picked up on some presidential small talk as Bill Clinton complimented George W. Bush on the Oval Office floor-covering. Mr. Clinton said, " I love this rug." Each president chooses his own rug design for the famed office.

It is the first White House meeting of current and former presidents since 1981 when Ronald Reagan asked Richard Nixon, Gerald Ford and Jimmy Carter to attend the funeral of assassinated Egyptian leader Anwar Sadat. In fact, presidential reunions have usually centered on state funerals or presidential library dedications.

As Princeton historian Julian Zelizer told CBS News, " Diplomatic funerals overseas actually are often the way presidents get together, or the death of a former president but this is not that kind of meeting. This is not ceremonial. This really almost a think tank."

It is also the ultimate power lunch. The current and former presidents can brief Barack Obama on their own experiences. With the Middle East again exploding in violence, they can explain their own varying degrees of frustration in trying to bring peace to the region. They can also sympathize with the unprecedented economic challenges that Mr. Obama will confront.

Above all, they can convey a sense of what has been described as "the loneliest job in the world." Andrew Jackson described the presidency as "dignified slavery." James Buchanan was reported to have told his successor Abraham Lincoln, " If you are as happy entering this house as I am leaving, you are the happiest man in the world."

Harry Truman compared the White House to "a great white jail." Ronald Reagan said residing at 1600 Pennsylvania Avenue was like "living above the store."

In an interview for CBS News Radio's World News Roundup , Hofstra University presidential expert Meena Bose said, " The loneliness as well as the visibility, the pressures, these are all issues that the former presidents can convey."

Mr. Obama has already chafed at the pressures that he has only started to face. In a CBS News 60 minutes interview he lamented the fact that he's unable to take walks. He has asked reporters and photographers to back off, especially when he's with his daughters.

It's too soon to say whether today's meeting is an indication that Barack Obama will call on his predecessors once he takes office. Presidential historian Douglas Brinkley told the CBS News Early Show that at least for today, "Obama's making a real statement that I'm going to be seeking counsel and advice from all of the ex-presidents."