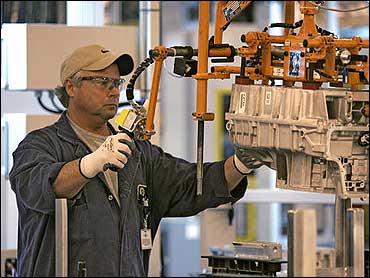 Wages were a key sticking point in the failure of the House's auto bailout bill (which the White House supported) when it arrived on the Senate's doorstep.

But wages aren't the whole story.

When Congress debated the bailout package for Detroit, Senate Republican leader Mitch McConnell and other Republicans had demanded that wages and benefits for employees of U.S. automakers needed to be renegotiated to match the lesser overall compensation that foreign carmakers like Toyota, Honda and Nissan pay at their U.S. plants.

The Associated Press reported that, for example, the average United Auto Workers member makes $29.78 per hour at GM, while Toyota pays its workers (most of whom are non-union) about $30 per hour. However, when total benefits (including pensions and health care for workers, retirees and their spouses) is factored in, GM's total hourly labor costs is about $69, while Toyota's is about $48.

The Japanese automaker has fewer retirees in the U.S., and its health care benefits and pensions are less generous than those negotiated between Detroit and the UAW. Another key point is that health costs and pensions for auto workers in Japan - worth billions - are subsidized by the Japanese government. Not so in the U.S.

UAW representatives were wary of renegotiating its contracts again, after having already settled for lower wages in its contract talks with GM earlier this year. [New hires at GM are paid $14-$16 an hour; Ford and Chrysler also pay new hires less; this has stirred the companies to offer buyout packages to their older workers.]

Last week UAW President Ron Gettelfinger told CBS Evening News anchor Katie Couric that labor has already sacrificed a tremendous amount in order to support the auto industry. "Are we willing to do more? Yes, we will."

The union made concessions in its last few rounds of contract talks, and also agreed earlier this month to reduce benefits for laid-off workers and accept deferred payments into the trust fund set up for retired workers. GM, for one, was scheduled to pay $7 billion into the fund by the end of the month.

Union leaders warn that benchmarking wages of its members with those of non-union workers at auto plants run by foreign companies may be brought down even further, as those companies seek to cut their labor costs.

The Detroit Free Press reported last week that it had obtained an internal Toyota report which said the company should align its hourly wages with the prevailing manufacturing pay in the state rather than those of competitors in the auto sector, with the goal of cutting an expected $900 million increase in worker compensation by 2011 by one-third.

State and local subsidies to foreign-owned auto assembly plants have totaled $3.6 billion, to fund the construction of new operations or to expand existing ones. This has helped make BMW, Honda, Mercedes Benz, Nissan, Toyota and Volkswagen more competitive in the United States, thanks to U.S. taxpayers.

Greg LeRoy, executive director of Good Jobs First, said that while the proposed federal aid to Detroit automakers would take the form of a loan (with an expectation of being paid back), "the vast majority of subsidies to foreign auto plants were taxpayer gifts."

Such subsidies have been responsible for bringing new jobs and tax revenues into depressed areas, such as when Nissan opened its first North American plant in Smyrna, Tenn. in the early 1980s - aided by generous tax breaks.

In the 10 years since foreign automakers began producing cars or engines in Alabama, automobiles have become the state's leading export at more than $5.4 billion last year. The state's automotive industry now represents 11 percent of the state's manufacturing GDP. So the state's investment of approximately $800 million to lure Mercedes-Benz, Honda, Hyundai and Toyota to Alabama proved farsighted.

This year Volkswagen announced it is opening a plant in Chattanooga, Tenn., which is expected to add about 2,000 jobs from the Tennessee/Georgia/Alabama area. The 1,350-acre industrial park land parcel was offered to Volkswagen at no cost. Estimated value: $81 million. Other incentives are expected to surpass $300 million.

In West Point, Ga., Kia is building a plant that will create 2,500 nonunion jobs (starting at $14 per hour), plus an additional 2,500 jobs for parts suppliers, thanks in part to the $400 million in tax breaks and other incentives that Kia received from state and local governments.

But such U.S. taxpayer handouts don't always go smoothly. It was announced this week that Toyota is delaying completion of a plant under construction in Blue Springs, Miss., scheduled to open in 2010 for producing Prius hybrid cars. While Toyota has spent $300 on the project so far, the state has invested $200 million and local governments have invested about $35 million.

Gov. Haley Barbour said at a news conference that Toyota plans to work with state and local governments to mitigate extra costs caused by the delay.

A benefit of investing in new plants in the South has been that modern assembly processes have made these auto companies more flexible in their output, and in the application of labor resources. This can keep the number of hires down, or at least have them spending less time cooling their heels as production lines are retooled, so production costs are lower than at older plants up North.

Beyond The Shop Floor

Even the roar from Congressional critics about assembly line largesse seemed to miss the fact that (according to the UAW) labor costs account for about 10 percent of the cost of producing a vehicle; the remaining 90 percent includes research and development, parts, advertising, marketing and management overhead.

One major point about compensation and wage disparities: In 2007 GM's CEO Rick Wagoner earned about $15.7 million (including $1.6 million in salary, plus non-equity incentive compensation, benefits and other expenses), a jump of 64 percent compared to 2006. Ford's CEO Alan Mulally's total compensation in 2007 was $21.7 million, including a $2 million base salary.