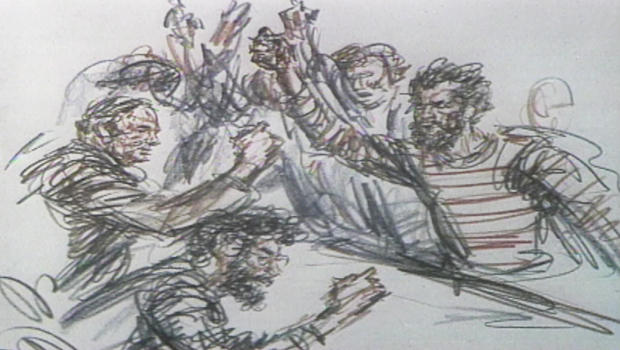 In 2020 as the season of social unrest has become the autumn of discontent, it's remarkable how it looks like another time 52 summers ago.

In 1968 there was revolution in the air; the nation was in turmoil over civil rights and split over the Vietnam War. And in late August, outside the Democratic National Convention in Chicago, around 10,000 protesters squared off with about 23,000 police and National Guard troops … and all hell broke loose.

Seven months later, the government charged the suspected ringleaders with, among other things, conspiracy and crossing state lines to incite a riot.

Their trial is now the subject of a new Netflix film, "The Trial of the Chicago 7," written and directed by Aaron Sorkin.

The movie's been in the works for 14 years, but Sorkin said it took on a new urgency after President Donald Trump took office.

Correspondent Tracy Smith asked, "Was there a moment in Donald Trump's ascendancy when you said, 'Okay, now I need to tell this story'?"

"It began when he was running for president," Sorkin said, "and at his rallies, when a protester would shout out something, he'd become nostalgic about 'the old days' when they'd beat the crap out of them and punch them in the face."

"You know what they used to do to guys like that when they were in a place like this?" Mr. Trump said at a February 2016 rally. "They'd be carried out on a stretcher, folks."

One of those protesters, Chicago 7 defendant Rennie Davis, needed a stretcher after taking a billy club to the head. "I was being clubbed by police, and police were literally screaming, 'Kill Davis,'" he recalled.

"And how bad was your head injury?" asked Smith.

"And most of the nurses, they could end their careers by what they did: they put me on a trolley cart and covered me with a sheet and moved me from room to room, to hide [me] from the police."

For protesters, and the police who were ordered to stop them, it was a dangerous game. But the activists all knew what they were in for, said former defendant Lee Weiner.

Smith asked "Did you know going in that you were risking prison time?"

"There was always, of course, not only a possibility but a probability," Weiner responded. "You know, what are we gonna do? Just not do it, just because of that? Not a chance!"

Actor Sacha Baron Cohen studied Abbie Hoffman long before he played him: "Who is this guy? Is he a fool? Or is he actually the smartest guy in the room?"

Smith asked, "What do you think?"

"I think he was the smartest guy in the room," said Cohen. "He developed this whole style of protesting that was designed to elicit as much media attention as possible. And even during the riots in Chicago, Abbie always had his mind on where the cameras were."

In fact, Hoffman and his co-defendant, Jerry Rubin, became celebrities in their own right, as observed by CBS News' Bob Schieffer, who reportedin 1968, "It was raining, it was cold, in short it was not a fit night out for man and beast. So, it was only natural those masters of media manipulation Abbie Hoffman and Jerry Rubin should choose this night to hold a news conference."

Rubin told the press, "The only people who can stop this trial are people in the streets."

But the trial was a very different experience for the lone Black defendant, Bobby Seale, who wound up representing himself. He clashed often with Judge Julius Hoffman, and was gagged and chained to his chair for refusing to obey the judge.

"He would try to pull his hands up," recalled Davis. "And then he would just be clubbed in front of the jury. And this went on for several days."

Eventually, Seale's case was declared a mistrial, and the Chicago 8 became the Chicago 7.

Five were convicted of some charges, but all were overturned on appeal.

Their trial is history, but it seems their fight is still very much alive.

In 1968, as now, the demonstrators risked their safety and their freedom to make themselves heard. And according to Lee Weiner it was all worth it: "It was crazy, for sure. It was hard, it was brutal, it was dangerous. It was an effort by the government to belittle our efforts and our beliefs that America could be better. And so, we had to fight back.

"And in fighting back, we did not do a bad job!"

To watch a trailer for "The Trial of the Chicago 7" click on the video player below: