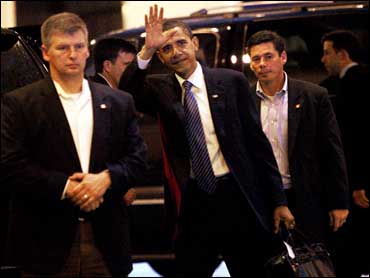 Rham Emanuel, whom President-elect Barack Obama named as his Chief of Staff, said it's important that Obama gets his economic team in order quickly, and that he is doing so faster than previous administrations.

Appearing on Face The Nation, Emanuel told host Bob Schieffer that Obama is now "going through the names" for his economic team.

"He has been working tirelessly with the transition team on the development of his economic team. … He wants us to move with deliberate haste - emphasis on deliberate, as well as equal emphasis on haste."

He also said, in relation to the auto industry's troubles, that "Washington needs to look at fast-forwarding the $25 billion that has been provided for retooling the factories for, basically, a more fuel-efficient auto fleet."

And while Obama has called for passage of an economic recovery act, Emanuel suggested that, during the transition period, Obama would not be participating in the lame-duck session of Congress, as a Senator from Illinois.

"I think that the basic approach has been he's going to be here in Chicago, setting up his economic - not only his economic team, but the policies he wants to outline for the country as soon as he gets sworn in, so we hit the ground running."

Emanuel said it is important that the public and Congress realize that Obama and his administration are not in office yet.

"President-elect Obama has repeated that there's one president, one administration at a time, and so you don't want to get in front of that," Emanuel said.

"And I think also, there's a question of atmospherics. … And I think the nation is ready to start seeing him as a president. And so to be down there on the Senate floor haggling over deals, he does not want to be seen as a legislative figure or a deal-making figure."

(CBS)
Brooks (left) said that Emanuel gave him the impression that Democrats "want to do everything at once. They want, as you called it, the big-bang theory. I think that's a disastrous mistake. You're going to tell me you're going to solve an incredibly difficult economic crisis, at the same time you're going to reorganize 14 percent of the American economy? Health care? I think that would be a gigantic overreach."

Brooks argued that if Obama does not take a slower approach - tackling the economy and health care in stages over several months, building faith in Washington - "in my opinion you're going to freak out the country."

John Harris, editor of Politico, also warned against overreach on the part of the incoming administration.

"I do think there are sort of two theories of presidential power at stake here," he said. "One says you're never more powerful than on January 21st, the day after inauguration, and you spend down that account, and you better get as much as you can, because it's going down.

"The other, as David suggests, there's a slow but steady approach that says a president can, by doing modest things first, getting them done, being effective, build up reservoirs, and so you can actually have more leverage, more power in year two, three and four than you do in year one."

Harris pointed to President Bill Clinton as an example, with the result that he lost the majority in Congress two years after his inauguration. "There was a lot of overreach in that first year, where they did try to do too much. And his popularity went down and down and down. He actually had more power after he got his clock cleaned in 1994."

"Obama, I think, will avoid that mistake," Brooks said.

Brooks was less optimistic about the Republican Party, following their losses on Tuesday.

"World of pain," Brooks said. "A generation of pain. 1964, it was so much better than now. In '64, they had a coherent belief system. They lost, they didn't persuade the American people about it, but they understood where they wanted to take the country.

"Now it's just a circular firing squad, with everybody attacking each other, and no coherent belief system, no leaders. You've got half the party waiting for Sarah Palin to come and rescue them. The other half is waiting for Bobby Jindal, the Louisiana governor, to come rescue them. But no set of beliefs. Really a decayed conservative infrastructure. It's just a world of pain."

Harris said that the party has to decide whether they are looking for "another Ronald Reagan to carry them out of the wilderness? By the way, that took Reagan years, a full generation to do that. Or are they looking for a Republican version of Bill Clinton?"

(CBS)
Harris (left) said that the party is now divided into two wings: the "hell, no" wing and a "yes, but" wing. "The 'hell, no' is going to fight [Obama] every step of the way" on ideological grounds.

"The other will say, 'Tes, we agree with a lot of his objectives; we want to do it in a somewhat different way.' It really, I think, goes right to a tactical and philosophical fault line in the Republican Party."

Brooks was not convinced that Sarah Palin could be taken seriously as the GOP's next Ronald Reagan.

"Well, the 'hell, no' group is rallying around her," he said. "And this past week, I don't think, has been particularly flattering to her, the McCain people - and the whole thing has been a complete disaster. They've attacked her for her lack of human capital and for being a diva.

"I'm not sure it's all fair, but one would not say she has spent her life preparing for an intellectual revolution to lead the party out of the wilderness. Let's put it that way."

Brooks declared himself a part of the "yes, but" wing. "You know, this is where the American people are," he said. "And, fundamentally, the conservative movement failed (and I've been in it my entire life) because it hasn't addressed the problems of today, the rise of China and Russia, the rise of inequality, energy, health care. It's great to worry about Reagan. I loved Reagan, but those days are over."