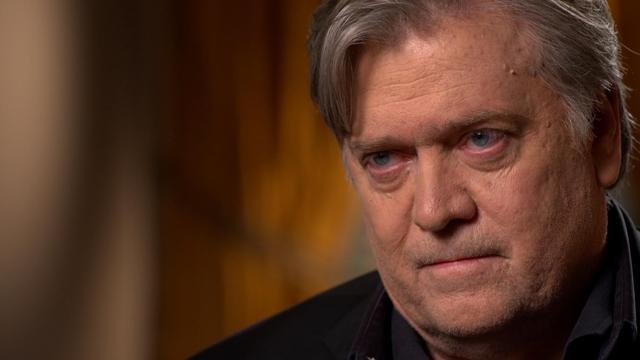 Steve Bannon, the former chief strategist for the White House and chairman of President Trump's campaign, sat down with Charlie Rose of CBS News's "60 Minutes" for his first-ever television interview, which was long and candid.

Since he left the White House in August, Bannon has resumed running the right-wing news site, Breitbart News. During his interview he shared his opinions on the firing of James Comey, working with the Republicacn establishment, the "Access Hollywood" tape, and Hillary Clinton, among other topics.

Here are some of the key takeaways from Bannon's "60 Minutes" interview:

Taking on the GOP establishment

"The Republican establishment is trying to nullify the 2016 election. That's a brutal fact we have to face," Bannon told Rose.

The former chief of staff cited Senate Majority Leader Mitch McConnell and Speaker of the House Paul Ryan, claiming that "they do not want Donald Trump's populist, economic nationalist agenda to be implemented."

"They're gonna be held accountable if they do not support the president of the United States. Right now there's no accountability," he later added.

Bannon expanded on what he sees as a significant failure on the part of GOP leadership: they couldn't repeal and replace Obamacare.

The very first meetings we had with the Republican establishment, here was the plan that was laid out.  The plan was to do Obamacare because, remember, Paul Ryan and these guys come in and said, 'We've done this for seven years. We've voted on this 50 times. We understand this issue better than anybody. We know how to repeal and we know how to replace, and this is ours. That's what we're going to start with day one, and we will have something on your desk by Easter. By the Easter break, we'll do repeal and replace. Come back from Easter, and all the way up to the August break, taxes. Come back from the summer break, on Labor Day, and we drive home to the end of the year on infrastructure. We accomplish all three big legislative goals in the first year.'

As Bannon put it, "There is wide discrepancy in the Republican party, as we know today, now that we're in it. But I will tell you, leadership didn't know it at the time. They didn't know it 'til the very end."

It's now September, and the Affordable Care Act remains in place, after the Senate failed to repeal the bill. Last week, Mr. Trump forged a deal with Democrats for the debt ceiling, funding the government and Harvey aid. It was a move that stunned Republican leadership, but the president wanted to be able to move on to work on the tax code.

Gary Cohn should have resigned

In the aftermath of the racially motivated violence in Charlottesville, Virginia, when President Trump seemed to blame white supremacists and counterprotesters equally, Bannon told Rose, "I was the only guy that came out and tried to defend him," saying that he tried "taking it up to a higher level. He said he wondered, "Where does this end? Does it end in taking down the Washington Monument?"

While he called neo-Nazis and neo-Confederates and KKK members "absolutely awful" and said "there's no room in American politics for that," Bannon declared that his problem was, "When you side with a man, you side with him."

"If you're going to break, then resign," Bannon said, adding, "If you find it unacceptable, you should resign."

Rose asked who he was talking about.

"I'm talking about obviously, about Gary Cohn and some other people," Bannon replied, in reference to a Financial Times interview in which the chief economic adviser expressed concern over the violence.  "That if you don't like what he's doing and you don't agree with it, you have an obligation to resign."

When asked if he believes Cohn should have resigned, Bannon replied "Absolutely."

Rose asked whether it was true that Bannon had described President Trump's termination of former FBI Director James Comey as the biggest mistake in political history.

"That probably would be too bombastic even for me, but maybe modern political history," replied Bannon.

Rose then asked Bannon to confirm what he was suggesting: "So the firing of James Comey was the biggest mistake in modern political history?"

"I think, if you're saying that that's associated with me, then I'll leave it at that," Bannon conceded.

He also told Rose that "I don't think there's any doubt that if James Comey had not been fired, we would not have a special counsel." Asked whether he thought Robert Mueller, the special counsel overseeing the Russia probe, should be fired, Bannon replied, "No, I do not."

"There's nothing to the Russia investigation," Bannon said, calling the multiple investigations in the House and Senate as well as the special counsel probe of Russian interference in the 2016 U.S. presidential election "a waste of time."

"It's a total and complete farce. Russian collusion is a farce," Bannon said.

When asked about specific documents relating to the CIA and FBI intelligence, Bannon replied that he "would never devolve classified information on this show, but that "it's far from conclusive that the Russians had any impact on this election."

He alluded to a speech she gave during the campaign about Breitbart, in which she attacked Breitbart for giving white supremacists a platform.

"That speech of hers is an embarrassment. Breitbart -- alt-right, ethno-nationalism, white supremacist. It landed flat," he said.  He added, "Not only is it morally wrong, it's also totally irrelevant. Economic nationalism is what this country was built on."  Bannon suggested that Clinton had made the mistake of focusing on identity politics, which, he said is not the economic argument embraced by other Democrats.  "Sherrod Brown gets this. Tim Ryan gets this....The people around Schumer get this," he said. They understand it. They're trying to reverse it. They're trying to get the identity politics out."

"And that is the question that will be answered in 2020," he told Rose.

Bannon sees himself as a "streetfighter"