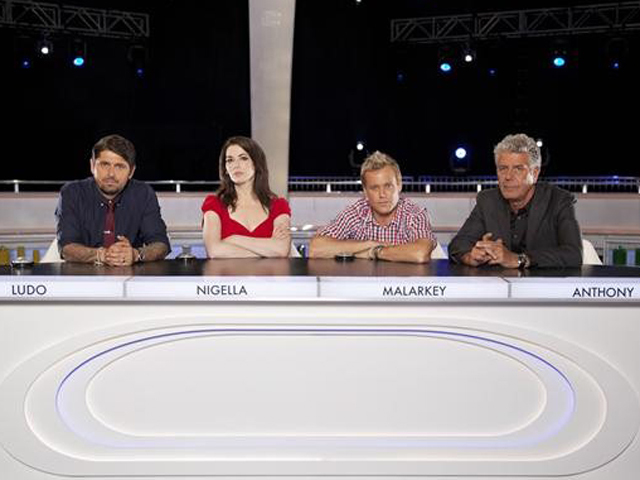 "Hell's Kitchen" ... "Chopped" ... "Top Chef"... it feels like there's almost an endless amount of cooking competition shows on TV these days. And, as if he wasn't busy enough, even outspoken chef Anthony Bourdain seems to have no reservations (we know) about coming into the mix.

Serving up flair from both sides of the Atlantic, the American Bourdain will co-host alongside equally brash British chef Nigella Lawson another one of these food competition shows. It's called "The Taste," and it's set to debut on ABC tonight.

On "The Taste," Bourdain, Lawson and two other judges (chef Ludo Lefebvre and restaurateur Brian Malarkey) will each mentor a group of four contestants, consisting of a mix of pro and amateur cooks.

So what's the big gimmick behind "The Taste" aimed to set it apart from other competition programs like "Iron Chef"? The judges on this series will be blind-folded when they chow down on the competitors' entries.

Bourdain and his fellow judges will have no idea what they're eating, which contestant made it, or who they're eliminating. Picture "The Voice" and the way the judges on that show listen to contestants with their chairs turned around.

The show's unique format has already been criticized by some foodies, who point out that the visual element of the food will be missed by the judges when they're blind-folded. We'll see if the skeptics will be eating their words or not when "The Taste" premieres Tuesday at 8 p.m. ET on ABC.

Tell us: Do you plan to watch "The Taste"?