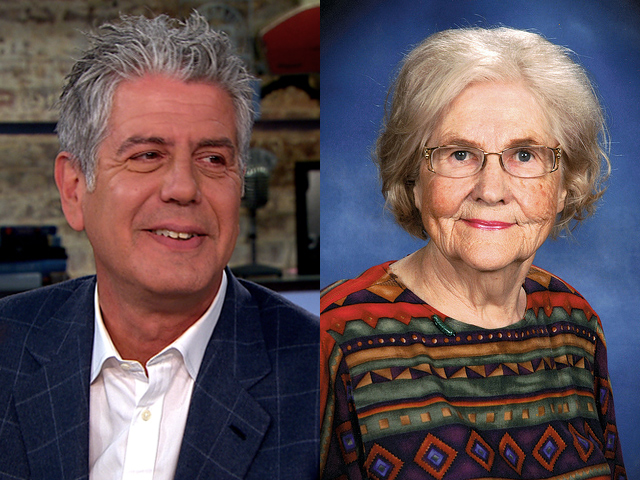 (Watch Bourdain talk about Hagerty in the video below.)

Bourdain called Marilyn Hagerty's body of work - 30 years of reviews - a history of dining in America. "I thought, 'I want to publish this person' and I will be doing just that."

The 85-year-old Hagerty, gave an earnest review of the restaurant. Sites like Gawker, and Fark picked it up. Bourdain said his first instinct was to sneer at the review, but he called her reaction "dignified." Her column has been shared nearly 30,000 times on Twitter, and over 40,000 times on Facebook.

Bourdain's show, "No Reservations," takes viewers around the world and seduces them with not only food - but culture as well. The foul-mouthed TV host is as passionate about local cuisines as he is about the people who cook them - and the stories he brings back about both have been Emmy award-winning.

What has Bourdain learned from all this?

"The world is a somewhat nicer place than I would have thought," he said. "People with very little... and very little access to expensive ingredients - are often the most generous and cook the best. It's nice at my age to get to learn stuff on a regular basis, and this job keeps me learning."

Bourdain said he thinks these random acts of kindness have also made him less cynical. But he remains stunned by the common complaint that there isn't enough time to cook and its use as an excuse to eat cheap, processed food.

"You know, rice farmers in Vietnam and traditional farmers in France - they had no time, no money, no good ingredients," he said. "Somehow, people in this world find a way to cook with pride and cook well."

He remains hopeful though, that as people become more conditioned to be aware of what's going in their food and who's cooking it, that things are getting better for American eaters.

"No Reservations" airs Mondays on the Travel Channel.