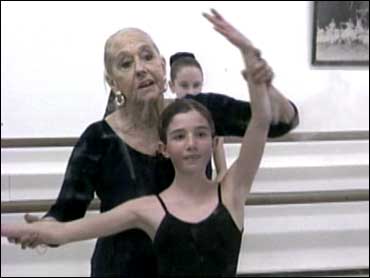 Tchaikovsky’s “Nutcracker” has a certain group of young performers on their toes every Christmas. Making sure they’re also at their best is the job of the teacher our Bill Geist has gone to visit:

‘Tis the season of “The Nutcracker” in cities across the country. How could you have Christmas without “Nutcracker”?

One of the very first “Nutcrackers” in the country was a small town production in Ridgewood, N.J., now celebrating its 50th anniversary under the command of Madame Irine Fokine.

“I was one of the first ones to start it,” she said. “Then that whole craze started, and everywhere you look, it’s ‘Nutcracker.’”

This year’s “Nutcracker” is also a celebration of the one and only Madame Fokine, dance teacher extraordinaire, descendant of a storied Russian ballet family.

“They call me ‘the legend,’” she told Geist “I’m the last of the Fokines.”

Her mother, prima ballerina Alexandra Federova, danced in the first performance of “The Nutcracker” in St. Petersburg in 1892, and introduced it to America in 1940.

Madame Fokine put on her first “Nutcracker” in Ridgewood in 1957.

On a recent visit, Madame Fokine’s studio looked virtually unchanged from the day it opened in 1950 - even the piano doesn’t seem to have been tuned in all those years

And Madame Fokine, now 85, is still there, teaching the latest of thousands of aspiring dancers who’ve come to this plain storefront seeking to become ballerinas.

“What are you doing, whatever-your-name-is,” she reprimands one young dancer. “Point your bloody toes,” she says to another.

She teaches classes all week, and during “Nutcracker” season spends entire weekends at rehearsal.

“Come on, left foot front!” she cries. Something else that hasn’t changed:

Madame Fokine is still the stern taskmaster she’s always been, in the tradition of demanding Russian classical ballet mistresses. Claudia, for one, experiences that.

Stephanie and her mother Susan are both in this year’s “Nutcracker.” Stephanie started dancing at age four and was, admittedly a little scared of her at first. Her mom still is.

“You’re not easy on the students,” Geist said, rather understatedly.

“No, I don’t intend to be,” Madame Fokine said. “I have to earn my keep. And just having pudgy little kids running loose, having fun, making noise, and me saying nice, and collecting money, what does it do?

“I’m here to teach them the only thing I know, ballet. If you don’t want to learn it, what are we doing together? I can find better company than a ten-year-old.”

“Soldiers battle mice!” she yells to the cast members. “Mice, don’t do that with your arms, dammit all!”

At this rehearsal, “The Nutcracker” leads his wooden soldiers into battle against an army of mice led by the Mouse King, but there’s never a doubt who’s the commanding general and drill sergeant here

The sleigh is stopping in slightly the wrong place. The snowflakes are not really flying. Mother Ginger’s hoop skirt isn’t quite right. And the lifts could be better.

“Turn and boom,” she instructs. “Stretch your knees.”

Her motto: “Do the best you can at all times, and make yourself proud of what the heck you’re doing.”

Not that she can’t be complimentary: “Good, very good, both of you.”

And even if they didn’t appreciate Madame Fokine’s old-school approach at the time, they seem to now.

Amanda Hankes is one of Madame Fokine’s former Sugar Plum Fairies who dances now with the New York City Ballet.

“You understand if you want something it takes hard work,” she said. “It’s not just handed to you, and that was something that she made you work for it. And she was so pleased when you succeeded - but you had to do the work to get there.”

As Madame Fokine watched, her students performed to near-perfection, as they’d been taught. OK, there were a few professionals thrown in, like Eugene Petrov who teaches at Madame Fokine’s studio

The gnomes were right on their marks, as ordered … the snowflakes were elegant and graceful, as instructed … the battle went according to her plan… Mother Ginger’s magic gown functioned flawlessly … the lifts were perfection.

“I often wondered, what am I doing in this world?” Madame Fokine said. “I first started to realize that very, very few of my students will partake of it as a career. So why am I doing this? This is so silly, to teach them ballet and insist on something that is not a usable product. So I decided that I will help them grow up. And it seemed to have worked. I teach them how to work hard, never give up.

“And many of them have learned how.”