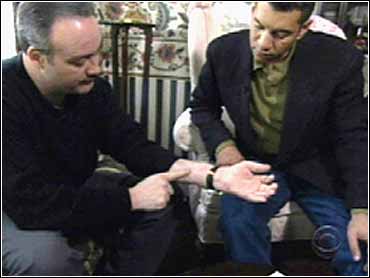 "I can tie my shoes. I can hold things in my left hand and do things with my right. I can carry both my sons now. I could never do that before," said Matthew Scott.

Two years after receiving the first hand transplant ever in the United States, Scott says the operation has made him feel whole again, CBS News Correspondent Russ Mitchell reports.

"It's a little different than my right one, but honestly what I see (with having his transplanted hand) is the culmination of a dream," Scott said.

In 1985, shortly after he started working as a paramedic, Scott lost his hand in a fireworks accident. He describes the accident as "truly, truly devastating.

"I was very, very young. I was only 24 years old at the time and fresh into a new profession that I loved to do and was trained for," he added.

He did eventually go back to being a paramedic, but he was angry, and self-conscious about his prosthesis.

"When I got married, I couldn't wear a wedding ring on my left hand. During our ceremony, Dawn put it on my right hand, but that was a source of aggravation to me because it wasn't where it should be," he said.

Matthew lived without a hand for 13 years, until he managed to convince Jewish Hospital in Louisville, Kentucky that he was right candidate for a transplant.

The operation took 15 hours; the recovery took much longer. He will take anti-rejection medicine for the rest of his life, and live with the risk that his body could reject that hand at any time. It began to reject it three times already.

Still, Matthew says, it's worth it.

To Dawn Scott, the fact that the benefits of the transplant outweigh the difficulties may not be immediately apparent to others.

I really think you have to spend one day in our home or living in Matt's shoes to understand what an incredible benefit this is for someone like him," Mrs. Scott said.

However challenging the transplant has been, Scott's journey has also had some sweet moments. A lot of people would have liked to have been in his shoes when he threw out the first pitch at a Philadelphia Phillies baseball game last season. Scott was a bit nervous, he said.

"The only thing I could think of was please don't drop the ball on the back swing," he said.

And now, Matthew has returned to another old hobby. He received drumsticks as a Father's Day present, and though he can't play "Wipeout" with them, "I can do some of my old drum workout," he said.

Scott does feel hot and cold — and pain — in his left hand, and while he does not have individual finger control, he can carry up to 25 pounds. These are big accomplishments that are bound to be improved.

There have now been eight hand transplants wrldwide.