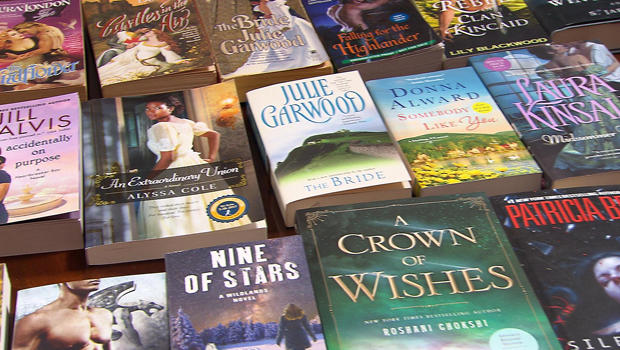 Tuesday is Valentine’s Day, when love is on everyone’s mind. But for the other 364 days, at least for some of us, a good romance novel is in order. With Faith Salie, let’s peek between the covers:

Star-crossed lovers are the subject of a Shakespeare senior class workshop at New York’s Fordham University. Leading the seminar, with degrees from Yale, Harvard and Oxford, is an English scholar with a surprising double life.

To students and faculty, she’s Professor Mary Bly. But to legions of readers, she’s author Eloisa James, a reigning queen of romance.

“How hard is it to be a Shakespeare professor by day and a romance novelist by night?” Salie asked.

Under the Eloisa James nom de plume, she’s written 22 bestsellers. Her historical romances sparkle with wit, and always deliver what romance lovers call an HEA (the “happily ever after”).

“The promise of romance is that you and the people you love will live together into the future,” Bly said. “It’s a beautiful promise, right?”

But why does the Romance  genre need defending? “I think in some ways, it is a genre written by women and for women. And many of the sort of the people who define what real literature is in this country are male. And honestly, romance readers and romance writers don’t really care all that much about what you think of us.”

The publishing industry sure does! Romance is a billion-dollar business, making up an estimated 30 percent of the fiction market.

Some books, like “50 Shades of Grey,” become Hollywood blockbusters. But it’s not all about sex.

When asked what is the biggest myth about romance,” Sarah Wendell, who runs Smart Bitches, Trashy Books (an online community of romance readers), responded, “That they’re all just sex. And that is so untrue.”

“What is it about romance that attracts smart bitches?” Salie laughed.

“Well, part of it is being told by any countless number of books you are important. You matter. Your emotions matter. Your experience matters. And your happiness matters.”

Wendell has been devouring romance without shame for going on three decades. She’ll also be the first to poke fun at it, lovingly.

As for the categories, they run the gamut: same-sex, suspense, sci-fi, pretty much everything.

And in Los Angeles, there’s an entire bookstore devoted to romance, called -- what else? -- The Ripped Bodice.

Checking out the store was romance rock star Beverly Jenkins. She’s another bestselling novelist, writing about African-American heroines from the 19th century, whose stories offer not only lessons in love but history, too.

“I think it’s about values,” Jenkins said. “It’s about families. It’s about maybe a story that the majority culture does not associate with an African-American background: hope, and a bittersweet history, and taking the lemons that America’s given us and making lemonade out of it.”

Sex, love, empowerment, and that happily-ever-after: When it comes to romance novels, don’t judge the book by its cover.

“Almost always -- like, virtually always -- you can have a big alpha hero,” said Bly.” But at the end, the person in charge is the heroine, end of story.”

Author Geraldine Brooks on her new book
More
Thanks for reading CBS NEWS.
Create your free account or log in
for more features.
View CBS News In
CBS News App Open
Chrome Safari Continue
Be the first to know
Get browser notifications for breaking news, live events, and exclusive reporting.