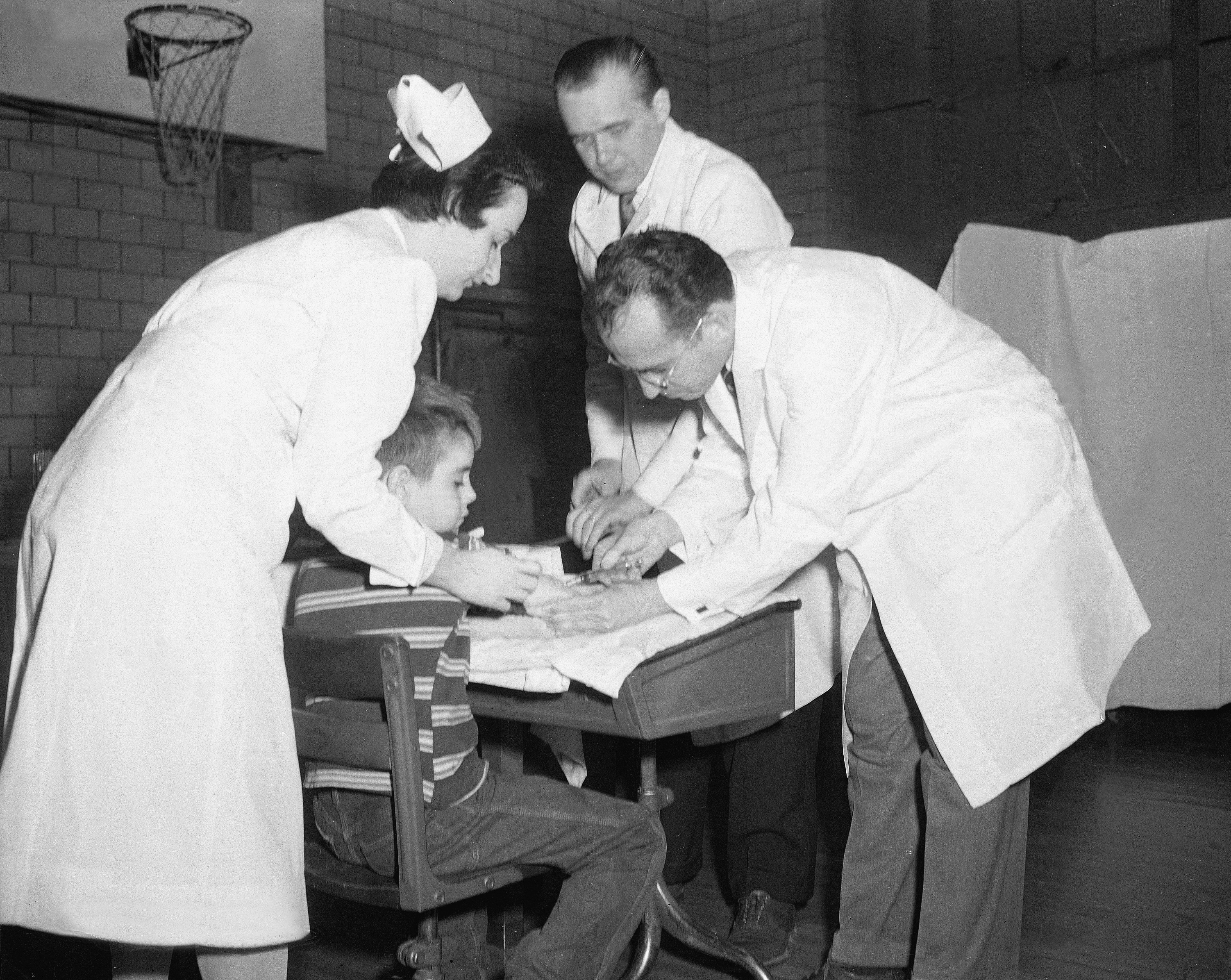 A nationwide trial of an experimental vaccine using school children as virtual guinea pigs would be unthinkable in the United States today.

But that's exactly what happened in 1954 when frantic American parents -- looking for anything that could beat back the horror of polio -- offered up more than 1.8 million children to serve as test subjects. They included 600,000 kids who would be injected with either a new polio vaccine or a placebo.

Equally remarkable, the Salk polio vaccine trial stands as the largest peacetime mobilization of volunteers in American history, requiring the efforts of 325,000 doctors, nurses, educators and private citizens -- with no money from federal grants or pharmaceutical companies. The results were tracked by volunteers using pencils and paper.

And it lasted just one year, with officials hopeful at the outset that they would be able to begin giving the vaccine to children within weeks of the final results.

"I can't imagine what the disease would be today that could get that many parents to sign up their children for an experimental vaccine trial," said Daniel Wilson, a history professor at Muhlenberg College in Allentown, Pa., who has written three books on the history of polio in the United States and is himself a polio survivor. "I think it's a measure of how much people feared polio that mothers and fathers were willing to accept the word of researchers that the vaccine was safe."

Financing for the trial came from donations made to the National Foundation for Infantile Paralysis -- the forerunner of the March of Dimes. The foundation was created in 1938 by President Franklin D. Roosevelt and his law partner, Basil O'Connor.

Roosevelt had a profoundly personal interest in defeating polio -- the disease left him crippled in 1921 at age 39, and he spent his entire presidency in leg braces, confined to a wheelchair, unable to even get up by himself.

The National Foundation spent $7.5 million in donations -- $66.3 million in today's dollars -- to initiate, organize and run the vaccine trial, with little participation from the federal government.

"That's what makes it the greatest public health experiment in history," said David Oshinsky, who wrote the Pulitzer Prize-winning book "Polio: An American Story." "It's not just the success of the trials. It's the incredible organization involved, with tens of thousands of mothers and families coming together to save their children. And it was all done privately. That's what makes this so incredible."

There was enormous pressure to get the field trial under way in advance of the 1954 polio season. Polio epidemics took place during the summer, with the number of cases rising through June and July and peaking in August.

"We realized we wanted to get it accomplished in 1954, early enough that it could possibly have an impact on that year's polio season," said David Rose, archivist for the March of Dimes.

A grass-roots movement without precedent

The National Foundation for Infantile Paralysis already had a nationwide network of health officials, medical professionals, elementary educators and volunteers in place to help respond to polio outbreaks. These were the same people who would form the workforce needed for the clinical trial. In addition, the foundation's annual "Mother's March" raised millions in dimes and dollars each year, which was used for polio research and aid to communities enduring polio epidemics.

Some of that money had funded Dr. Jonas Salk's creation in 1952 of an experimental "killed-virus" polio vaccine, and his subsequent experiments that proved the vaccine's safety in humans.

Basil O'Connor and the National Foundation's scientific advisors had taken a keen interest in Salk's vaccine, especially when his early experiments suggested that it increased the level of polio antibodies in a person's blood without any ill effects. So plans were made for the national trial.

O'Connor announced in November 1953 that the field trial would begin the following spring, and would be based on an "observed-control" design. That meant one group of children would receive the vaccine, and another group of kids in the same age range would be observed but not injected with either the vaccine or a placebo.

There were, of course, major concerns. Some questioned whether the National Foundation could perform an impartial evaluation of a vaccine that it had had a hand in creating. They also expressed doubts about the "observed control" design of the trial.

The problem with the "observed-control" approach was that middle- and upper-class neighborhoods were more likely to suffer a polio outbreak than poorer areas. The reason: better sanitation, which meant less exposure to germs and resulting immunity, said Dr. Peter Salk, Jonas Salk's son and president of the Jonas Salk Legacy Foundation.

"The concern was that the children who would end up receiving the real vaccine would be from a different social cut from those who would serve as observed controls," Salk said. "It was the wealthier neighborhoods that had more polio. If you took kids from the wealthier areas, they would have a higher risk of polio, and those kids would be expected to have a higher incidence than controls."

To counter potential charges of scientific bias, the National Foundation turned the polio vaccine field trial over to Jonas Salk's mentor, Dr. Thomas Francis, Jr., a virologist at the University of Michigan who had worked with Salk years before on an influenza vaccine.

Francis established the Poliomyelitis Vaccine Evaluation Center at the University of Michigan, which would guide the trial and independently analyze the results.

Soon after taking charge, Francis announced that the trial would be conducted using two separate "arms." One arm would follow the "observed-control" design originally proposed by the National Foundation. The second arm would utilize a "placebo-control" design, with half the children getting the vaccine and the other half a placebo.

Salk himself, who had only a supporting role in the massive undertaking, initially resisted the idea of a "placebo-control" trial, arguing that doctors shouldn't be giving kids something that deliberately would not protect them against polio, his son recalled.

"Very fortunately, my father ended up yielding to the forces at work, which was that the only way it would be possible to convince anyone and to understand the effectiveness of the vaccine would be to use a placebo-controlled design," said Peter Salk.

Between April 26 and July 10, 1954, volunteers distributed Salk's series of three polio shots. In all, more than 443,000 children received at least one polio inoculation, while more than 210,000 received a placebo, according to the March of Dimes.

"There were three shots and it was a double-blind study," Oshinsky said. "Neither the child nor the caregiver knew who was receiving the vaccine or a placebo, so the paperwork was enormous."

All the kids in the trials became known as the "Polio Pioneers," and each received what would become a much-treasured Polio Pioneer metal pin and certificate of membership signed by O'Connor himself.

Bonnie Yarry of Maitland, Fla., still had her Polio Pioneer pin and certificate in 2005 when she wrote a personal remembrance for the non-profit group Post-Polio Health International.

"With butterflies in my stomach, I stuck out my arm, never looked at the needle, waited for the prick and then the pain," Yarry wrote. "I heard others cry, but I didn't."

The Salk vaccine trial also served as one of the earliest and largest examples of informed consent, the process by which researchers get permission to experiment on human subjects, Oshinsky said.

"Parents actually signed a piece of paper saying, 'I give my consent to have my child participate in this experiment,' " he said.

Researchers spent the rest of 1954 following the health of all the children, and taking blood samples from 40,000 kids in the study to examine their antibody response.

Through three months of winter and the early spring of 1955, the researchers analyzed and evaluated the data gathered on inoculation, blood samples, and resulting cases of polio. Much of the work was done by hand, although some computations were performed using punch cards that were fed into a primitive computer the size of a room, Oshinsky said.

People were on pins and needles waiting for the results of the trial. Even Salk himself knew nothing about how the analysis was proceeding, his son said.

Then, just one year after the trial started, the National Foundation announced the results: The Salk vaccine proved 80 to 90 percent effective in preventing polio.

"The vaccine works. It is safe, effective and potent," stated the press release issued by the National Foundation on Tuesday, April 12, 1955. It concluded, "There can be no doubt now that children can be inoculated successfully against polio."

"Salk became sort of an instant hero," said Muhlenberg College's Wilson. "He appeared on the cover of Time magazine. He really was celebrated. [President Dwight] Eisenhower entertained him at the White House."

For some children, however, the vaccine came too late. Wilson contracted polio at age 5 in September 1955, months after the vaccine's success had been announced.

"The vaccine was out and available in the fall of 1955, but it was in short supply at that time in rural Wisconsin," said Wilson, who lived in Wausau back then. "I was a year short of going to school, and so I didn't get the vaccine." Now 64, he has had lifelong health problems due to his childhood polio.

Once Salk's vaccine became widely available, Oshinsky said, it saved the lives of tens of thousands of children in the United States and Canada.

And by 1961, the rate of polio had dropped by 96 percent in the United States, thanks to the Salk vaccine, according to the March of Dimes.

Salk's legacy, however, extends far beyond his vaccine. Oshinsky contends that Salk's true contribution to science was his demonstration that a killed virus vaccine could be as effective as using a live virus. The flu shot people receive every year is a killed virus vaccine, as are modern vaccines that protect against typhoid, cholera and whooping cough, he said.

"Jonas Salk showed that a killed virus vaccine would work and would be damned effective in fighting disease," Oshinsky said. "This was something that virologists of the day pooh-poohed. And Salk proved them wrong."

But Salk's vaccine, still available and the primary polio vaccine for the United States, isn't as widely used across the globe today as the live virus polio vaccine developed by his rival, Dr. Albert Sabin.

Sabin, a Polish medical researcher who become a naturalized U.S. citizen in 1930, tested the effectiveness of his oral vaccine on at least 100 million people in the USSR and other countries between 1955 and 1961.

His vaccine proved even better at preventing polio, and much easier to deliver.

"You can give it in drops, you can put the drops on sugar cubes," Wilson said. "You don't need to have an expert doctor or nurse to give the vaccine. Sabin's vaccine was the vaccine to bring polio to the edge of eradication."

"When you get the numbers way, way down, you have to come in with the Salk vaccine to finish it off," Oshinsky noted.

He added, "I don't think the irony would be lost on Sabin or Salk, two scientific rivals who truly did not like each other. We need both their vaccines to end polio forever. We can't do it with just one of them."