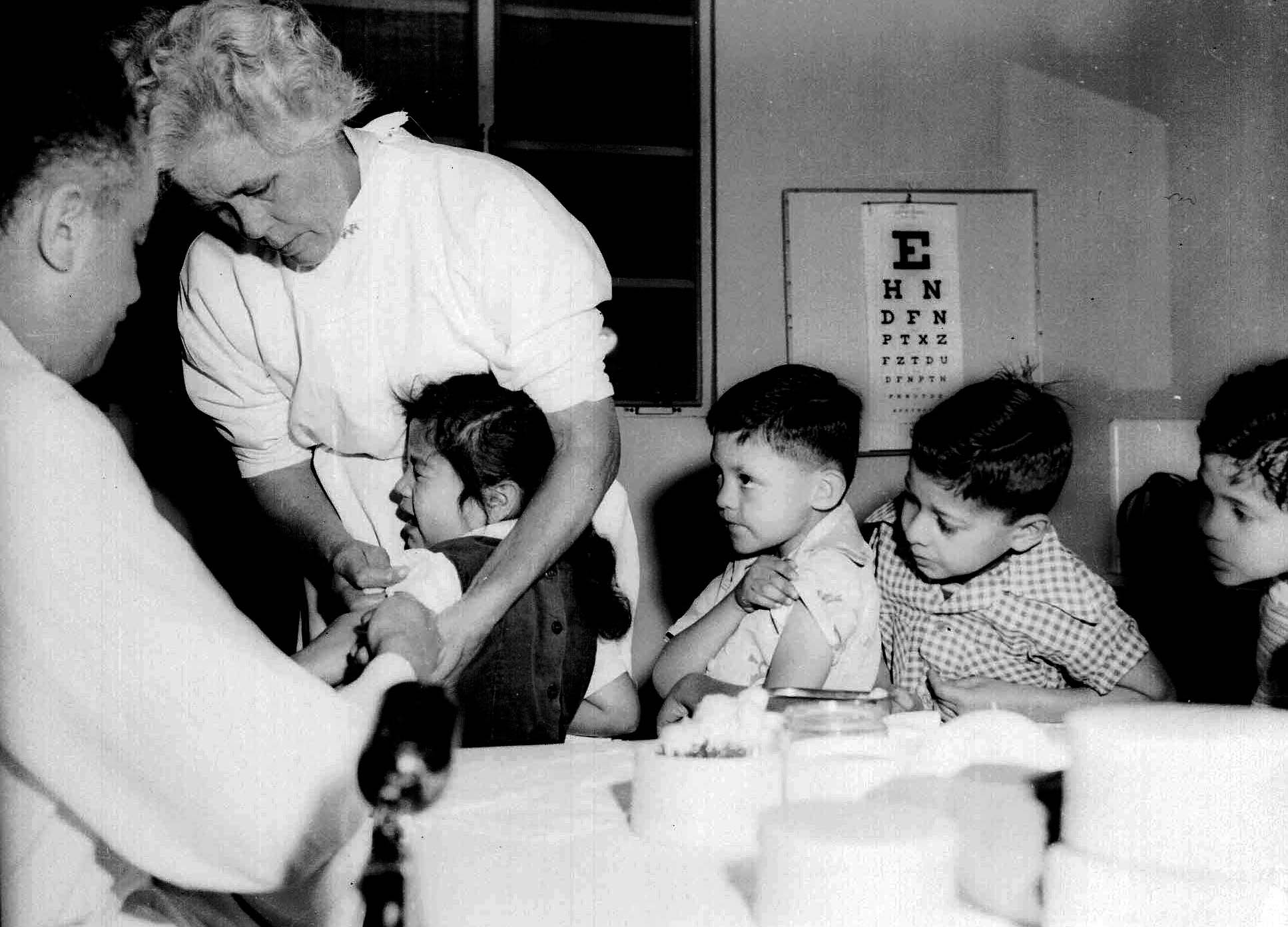 Most American parents today can't fathom the horror that summers brought during the first half of the 20th century.

Summer meant polio season, and whole communities waited in dread for an outbreak to strike.

Ordinary life all but ground to a halt in cities and towns where polio went on its rampage, crippling or killing scores of children. Movie theaters, bowling alleys, swimming pools and beaches -- even churches -- all were shut down to prevent the spread of what was then a mysterious disease.

Fear-driven neighbors turned on each other, or fled for more isolated environs.

"My mother talks about walking my sister in the neighborhood while I was in the hospital with polio, and parents pulling their children off the street and into the house upon sight of them, for fear of catching the disease," recalled Daniel Wilson, a 64-year-old history professor at Muhlenberg College in Allentown, Pa., who has written three books on the history of polio in the United States.

Yet from that fear and urgency came one of the most extraordinary scientific experiments in American history -- the Salk polio vaccine field trial of 1954. Desperate parents offered up more than 1.8 million children to serve as what amounted to test subjects, including 600,000 kids who were injected with either the vaccine or a placebo.

The trial, which celebrates its 60th anniversary this year, remains the largest clinical trial in U.S. history, a record that probably will never be challenged.

It also made a national hero out of an unassuming scientist named Dr. Jonas Salk.

Salk created his polio vaccine at the University of Pittsburgh in 1952, through research funded by the National Foundation for Infantile Paralysis, the precursor to the March of Dimes.

Salk's interest in polio grew out of his efforts on a flu vaccine in the 1940s, at the University of Michigan School of Public Health where he worked alongside his mentor, virologist Dr. Thomas Francis, Jr.

By the 1940s, polio was a plague across the country.

Before the 20th century, children were more likely to contract mild polio infection at earlier ages, achieving immunity without even knowing it. When new sewer systems and clean water supplies arrived, children were protected against dysentery and other infectious diseases, but they were also left vulnerable to contracting polio that could cripple or kill, Oshinsky said.

"The major polio epidemics don't come until the early 20th century, which is exactly the same time when we're doing things like separating waste from water, we're chlorinating our water and having waste treatment plants, we're using germ killers to wipe off tables, we're washing our hands more, and all of a sudden this disease pops up," he said.

Polio epidemics surged in frequency and size during the 1940s and early 1950s, and the virus crippled more than 35,000 Americans annually. It became one of the nation's most feared diseases.

Doctors now know that the polio virus lives silently in the throat and intestines, and spreads through direct contact with an infected person's excretions, most often their saliva or feces. The warm months of summer were especially conducive to the virus' spread.

In three-quarters of cases, an infected person showed no symptoms at all. Others had minor symptoms that resembled the flu, according to the U.S. Centers for Disease Control and Prevention.

But in one out of 100 cases, the polio virus made its way into the infected person's nervous system to attack the brain and spinal cord. Polio could permanently cripple a victim's limbs, or paralyze the muscles that control breathing.

None of this was understood in the 1940s and 1950s. But the ravages of the disease were visible everywhere in ordinary life -- particularly when it came to children.

"Unlike a lot of childhood diseases -- where when you recover, you're healthy again -- polio left people in wheelchairs, needing braces, in iron lungs," said Wilson. "There was always a reminder for parents of what could happen if your child got polio."

Oshinsky was a schoolboy during that time and remembers the disease was just as terrifying for children.

"School would start [again in the fall] and you'd see kids in leg braces and kids on crutches, and the occasional empty desk," he recalled. "All the newspapers would start putting box scores in -- sometimes on the front page -- about the number of children who were now entering polio wards. The numbers would rise during June and July, and spike during August."

Polio survivor Jan Nichols recalled the year 1952, which was the nation's worst, with almost 58,000 diagnosed cases.

"Parents lived in fear of warm weather -- polio weather. They adhered to all public health recommendations and warnings: avoid large public gatherings, never allow children to swim in public swimming pools, and insist upon frequent hand-washing," she wrote in an article last year for the Children's Hospital of Philadelphia.

"One of my peers remembers that her mother forbade her to eat peaches in the summer for fear that the virus could flourish in the peach fuzz. Another friend was forbidden to attend church each Sunday during the summer months," Nichols said.

Pamela Reed, who worked as an editorial assistant at the Kalamazoo Gazette newspaper in Michigan, contracted polio in September 1947, when she was 10 months old.

"I awoke from my nap feverish and stiff," Reed wrote in an article for the paper. "My frantic mother called the doctor, and he rushed right over. Taking a pin from my diaper, he poked the bottoms of my feet. No response. 'Call your husband home,' he told my mother. 'We need to get her to Children's Hospital in Detroit.'"

Reed was left with lifelong weakness in her lower left leg, which required her to use a leg brace and relearn how to walk.

Salk tested vaccine on himself, his wife and sons

At the University of Pittsburgh, Salk worked "16 hours a day, seven days a week, for years" on a polio vaccine, according to published reports, using techniques based on his earlier research on the flu vaccine. His goal: to develop an "inactivated" polio vaccine that used a dead strain of the virus to prompt the body to produce antibodies to fight off polio infection.

Salk's vaccine wasn't perfect. For one thing, it was complicated, requiring three shots to provide full inoculation. Other researchers funded by the National Foundation, most notably Dr. Albert Sabin, who was working at the University of Cincinnati at the time, felt that a live-virus vaccine would be more effective and easier to administer.

"Sabin was convinced it [a dead-virus vaccine] wouldn't work, and that the Salk vaccine was not a very good vaccine," Wilson said.

Salk reached the finish line first, however, and in 1952 launched a series of preliminary experiments to test the safety of his vaccine.

His first safety trials involved dozens of children at two Pittsburgh-area institutions -- the D.T. Watson Home for Crippled Children and the Polk School for the Retarded and Feeble-Minded.

The Polk School trial findings demonstrated that the vaccine stimulated a high antibody response -- evidence that it had the potential to protect children against polio infection.

"It was the thrill of my life," Salk recalled.

By March 1954, Salk had proven that his vaccine was safe through the experimental inoculation of 5,320 people -- including himself, his wife and his three sons.

With the safety of his vaccine established, the drums began beating hard for a clinical trial that would test its effectiveness.

"A lot of pressure developed to move as quickly as possible, given the intensity of the polio problem in this country," said Dr. Peter Salk, Jonas Salk's son and president of the Jonas Salk Legacy Foundation. "My father was a very careful scientist, and was working hard to understand all of the issues involved in creating a vaccine. When it became clear that the pressure was irresistible to move into a large-scale trial, then this huge national field trial was undertaken."

But it remained to be seen whether the challenge of such a massive trial could be met -- and in a way that would both scientifically prove the vaccine's effectiveness and pave the way for its acceptance by the American public.

And hovering above the science and the politics was the ultimate question: Would the vaccine work?