Who was the leader of the Merry Men of Sherwood Forest? Mark Phillips separates fact from fiction:

If only the trees here could talk, in these ancient woods of Sherwood Forest. They could tell us who the real Robin was.

Whether he was Douglas Fairbanks . . . or Errol Flynn . . . or Sean Connery . . . or Kevin Costner . . . or Richard Greene, who flew into our homes every week for years in the TV series "The Adventures of Robin Hood."

Or whether it's the latest to assume the mantle of the most famous crook of all time, Russell Crowe.

Frankly, there isn't much of the old 'hood left.

Aide Andrews, who is something called a "Heritage Ranger" of Sherwood Forest, and who plays Robin for a living, should know.

"Sherwood Forest used to stretch from 30 miles north to south, 10 miles east to west. All that remains today is 1.25 square miles," he said.

It's a big legend to be contained in such a small space, a legend that has grown and changed over the past 1,800 years . . .

A legend that began in the ancient ballads that first spread news of a bandit who came to be known as Robin.

But were the stories based on anything real? Was there a Robin Hood? 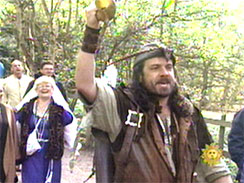 (CBS)
"Well, there wasn't one Robin Hood, there was many Robin Hoods," said Andrews (left), "and Robin Hood became a term for the outlaws who were living in the forest outside of the law.

"And of course, before 1300, scholars reckon there was about 8 historic candidates who could have been the real Robin Hood."

For centuries, the poems were all there were. It was at least two hundred years before the old tales were written down. Or was it?

He said he thinks there was a real Robin, and believes he know who it was.

Crook has recently discovered an old document recording payment by the King for the capture and execution of a troublesome thief at just the right time and at more or less the right place.

"He was either a man called Robert Hood who fled from the king's justice in Yorkshire in 1225, and there was also at the same time a Robert of Wetherby who was an outlaw, an evildoer of our land, as the royal letter says, who was hunted down by a posse of men," said Dr. Crook.

And was the main theme of the legend - stealing from the rich, to give to the poor - in any way historically valid?

"No," said Dr. Crook. "The first reference to him being 'a good man' occurs in a 15th century document, it's a sort of little, 2-line poem. The idea of him actually robbing the rich to give to the poor doesn't come in 'til the 16th or 17th century."

Like the movies have shown over the years, amid all the swash and the buckle, a story this old leaves lots of room for interpretation.

The 1922 Douglas Fairbanks Robin set the standard for pageantry, and for over-acting.

Errol Flynn's 1938 remake added color and sound, and became the template for all that followed.

There were plenty of variations on the theme. Sean Connery's 1976 version, "Robin and Marion," was a long-in-the-tooth Robin forced to come out of retirement.

And Kevin Costner's 1991 Robin seemed to come from America.

And if anyone thought Costner's "Robin Hood: Prince of Thieves" tip-toed close to satire . . . It still left plenty of room for Mel Brooks' 1993 "Men in Tights," after which Robin and his Merry Men would never be the same. 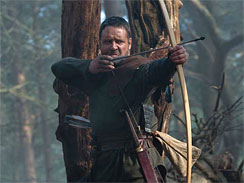 (Universal Pictures)
The new version, directed by Ridley Scott ("Blade Runner," "Alien") is a kind of "Robin Hood" meets "Gladiator" meets "Saving Private Ryan." And it makes some claim to being, if not historically accurate, at least set in a proper historic context.

"You know, Robin isn't a super hero," said Crowe. "He doesn't have a cape and he isn't a cartoon. What we tried to do is find out who the real person was, and sift through history and see which ground was fertile for a rebel leader like Robin Hood."

And so here is an evil King John, squeezing his subjects for more taxes . . . and Robin, not as a thief, but as a revolutionary figure trying to limit the king's power. Robin meets Che.

"You build a country like you build a cathedral, from the ground up," said Crowe/Hood.

This Robin joins the fight to get the king to sign the Magna Carta, the first document establishing the rule of law . . . the document on which modern democracies are based.

"And when we spread history in front of us on a table, we found that the very first time the Magna Carta was signed, and the Magna Carta is obviously directly related to the Declaration of Independence and it seeks to redress the balance of rights of privilege," said Crowe. "We started thinking, well, you count back from when that was signed and why did this particular monarch, why was he brought to the table, and it may well have been because he had someone like a Robin Hood breathing down his neck."

It's a preposterous idea, of course, but preposterous in a good way, thinks our modern Robin of today's Sherwood Forest, Ade Andrews.

"So now in the 21st century Robin Hood is being re-interpreted, and that's the beauty of folklore, isn't it?" Andrews said. "That's the magic of folklore."

"Very much so. It's a living, breathing tradition, and that's where the magic is. That's what's important about Robin Hood."

And if Robin Hood is still a living legend here, he's also an industry.

Every time a new Robin shows up on the screen, people show up here. And what's wrong with that?

"The legends are all about escape into the wildwood, isn't it?' said Andrews. "They're all about freedom, you know, away from this modern world as such, so we too can escape from those stories into the ancient wildwood. And that's gotta be good, isn't it?"